I must confess that everything I knew about James Ensor before doing this post I learned from this song by They Might Be Giants.  Thus I knew that he lived with his mother and the torments of Christ (who make great roommates!).  I don't know much more now that I have looked him up, but I did discover that he was a vindictive, sarcastic bastard who was obsessed with “artistic revenge”, and really that makes me like him all the more.

Thus we have this painting, "Les cuisiniers dangereux" (The Dangerous Cooks).

This evidently satirizes his struggles with “Les Vingts,” a group of Belgian painters.  Two men he has some issues with, Octave Mause and Edmond Picard, are shown as ruthless cooks serving up Ensor’s head on a platter à la John the Baptist. 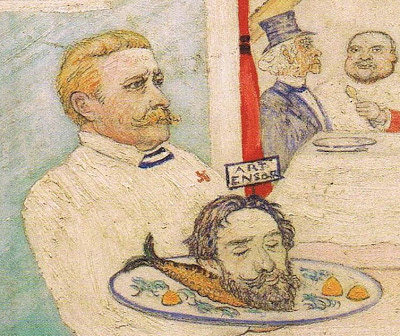 First off, let me just observe that whichever one has his head on a plate has a fantastic mustache.  It goes so well with his aloof demeanor.  I do wonder at the tools he carries with him, however…

It looks like some kind of freaky multi-knife holster, which makes some sense for a chef.  But what is that dangling off of it?  It looks like a mobile phone charm of a donkey or something, which would be only slightly less out of place if this were not painted in the 19th century.

In the back, we see some diners who I can only assume are art critics. 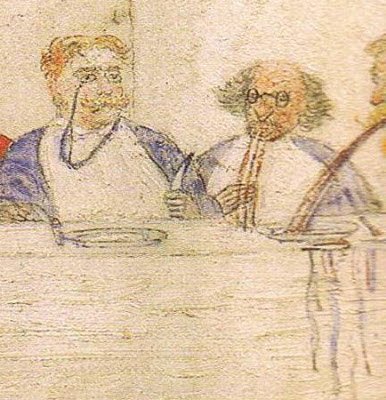 I am not sure how Teddy Roosevelt got an invite to a Belgian art critic dinner, but whatever.  Some of the diners are obviously not impressed, as they vomit spectacularly over the table. 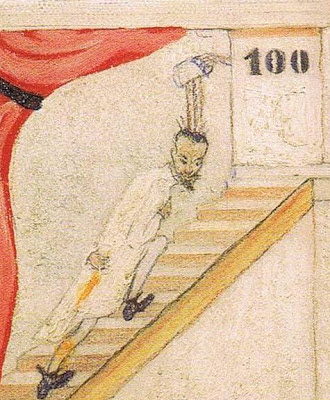 On the staircase behind the diners, an Asian man slinks up the stairs carrying a flaming…stick?  Match?  Cigarette?  In any case, someone is dumping a kettle of coffee on his head from behind a door, because Social Commentary.

In other news, there is a bird-lady laying an egg while she hangs by the neck.  It doesn’t look like you’d get much meat off her, being so much foot and feather, so I’m not sure why she’s strung up when she’s clearly still economically viable as an egg-producer. 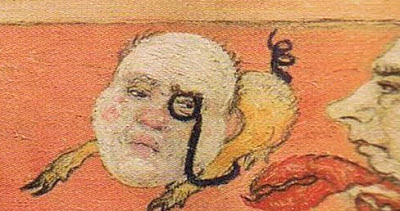 Finally there is this adorable monacled dwarf pig-man, and his lobster sidekick with a fantastic schnoz.
Posted by Sarcastic Ninja at 12:57