John the Baptist's Guardian Angel: "Whoa!  Geez, I turn my back for a minute--hey buddy, are you ok?  Can I get you some duct tape or something?"
Posted by Sarcastic Ninja at 11:04 No comments:

The Luncheon on the Grass 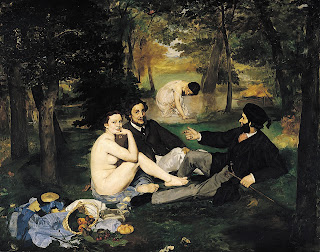 The Luncheon on the Grass (Edouard Manet):
"Now that we've finished lunch, may I please put my dress back on?"
"Darling, I told you, clothes for women are out this season.  All the ladies in Paris are going nude.  I swear!"
Posted by Sarcastic Ninja at 13:00 No comments: 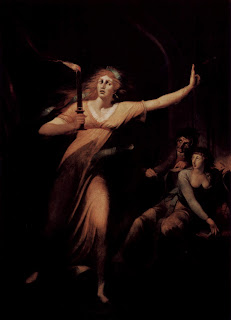 The Sleepwalking Lady MacBeth, by Johann Heinrich Füssli.  The scene: she charges through the room, while the Doctor and the Gentlewoman look on, bewildered. 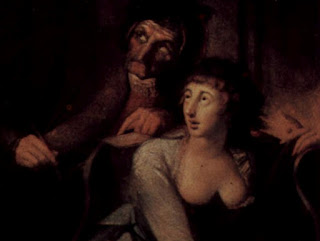 Upon closer inspection, though, it looks rather like Lady MacBeth has walked in on a creepy hobo about to autograph that woman's exposed bosom.

Posted by Sarcastic Ninja at 07:24 No comments:

Dear Internet, welcome to the first installment of Sarcastic Art Review Fun Time.  This blog arises out of two facts:
1) I like looking at art.
2) Art is often secretly ridiculous.

The goal here will be to take a painting or sculpture, and point out details that make it hilarious. Please note that I am no art historian, and very little factual content will feature here.  For the most part, this will largely be a venue for pictures with brief captions.  However, for this first entry I want to share one of my favorite works, for its sheer awesomeness. 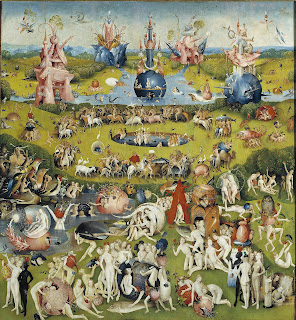 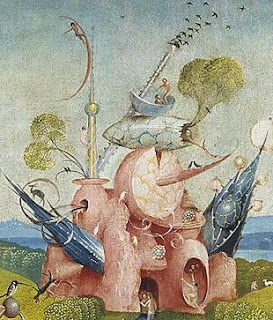 This building could easily have arisen from some 1960s sci-fi show.  It appears to have had some alien spaceships crash-land into it, but there is a satellite dish at the top calling for help (granted, with the 16th century messaging technology of the Carrier Pigeons). 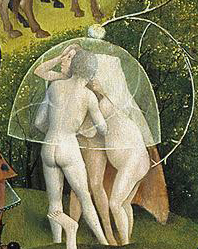 Speaking of 60s television, I swear they are in a naked Cone of Silence, perhaps hoping that God will not pick up their Renaissance equivalent of sexting. 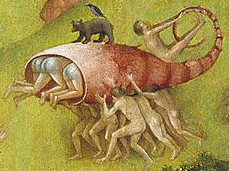 Here is a group of nude men carrying a hollowed-out crustacean, also full of naked people practicing their spelunking.  Like the cherry on a giant nude sea-dwelling sundae, it features a bear on top, wondering what these people are doing.  Unbeknownst to the bear, there is also the caramel drizzle of a friendly bird getting a free ride.  The dude at the tail seems quite happy to be doing Sexy Crustacean Yoga with a bear two feet away. 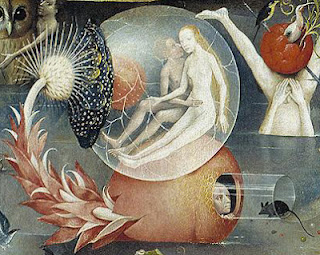 Moving on, here we have a couple engaging in heavy petting in a bubble on a birdfish, which itself is occupied by a man about to be attacked by a mouse in a test tube.  The artist is masterfully capturing this classical scene of mankind's struggle with privacy and animal testing. 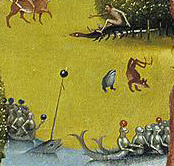 This appears to be an invading robot merman hoarde.  They may come bearing tasty fruit, but IT'S A TRAP.  Please also note the deer doing a handstand, and the nude man riding a centipede. 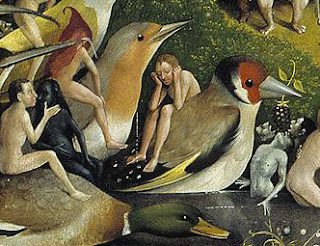 Along the theme of fantasy races, here a group of zombies hungrily feed from a blackberry proffered by a giant finch, whilst a man makes out with a Dark Elf on a mutant mallard. 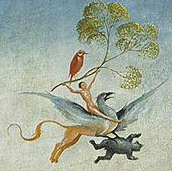 As a final note, here is a man riding a flying pony-eagle, about to drop an unhappy adult bear upon the unsuspecting wild party below.

Let this serve as a lesson that the master painters are far from boring, and that LSD must have been invented in the 1500s.  Thank you for reading this first installment; I will save Bosch's following painting depicting Hell for another time...
Posted by Sarcastic Ninja at 14:03 2 comments: