Buddhism has a rich body of mythology, which is often expressed through intricate art.  This makes it a prime target for ignoramuses such as myself to use as fodder for a humor blog.  Thus I present to you a 19th century work, “Rahula and his Assembly.”

I should note that if you do a Google search for “Rahula,” you will find that this is the name of Siddhartha Gautama (the Buddha)’s biological son.  Although I thought at first that there must have been something freaky in the water his mother was drinking while pregnant, a little further searching revealed that it is also the name of “the horrific Nyingma protector deity, wrathful, with nine heads and a giant face on the belly.”  So plus side, the Buddha’s son didn’t have faces all over his body.  Probably, anyway.  On the other hand, his parents probably should have used a better Baby Name book.

Rahula is the centerpiece of all this, so we’ll start with him.  But where to begin? 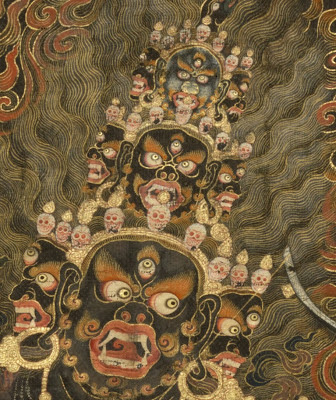 We’ll go with the head(s).  Really this is a very impressive tower of heads, tastefully adorned with little bonus skulls.  He must pay his eyebrow groomer very well to maintain that highly manicured look over all of those eyes – even the tapered look over the third eyes!  Very stylish.  Almost as stylish as his mustache and beard, carefully shaved and waxed into individual curls.  It must take him hours to get ready in the morning.  And when he finally gets ready, he’s got a lot of hungry mouths waiting for breakfast! 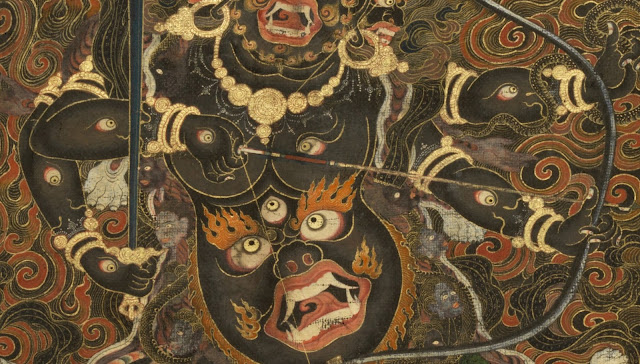 The one directly in his stomach being perhaps the most voracious of these.  I mean, his stomach-mouth is at least twice the size of his main face-mouth.  Imagine how many Pop-Tarts it would take to keep it satisfied!  Especially as the food would just keep falling out, since the stomach is a face.  Brings new meaning to the idea of being stuffed to the eyeballs.

In addition to his impressive ginger stomach-beard, he also has eyes on his hands and arms, presumably to allow him to aim his bow, arrow, and sword better.  I don’t want to know what the nipple-eyes’ main purpose is.

Rahula’s entourage has some interesting entries, as well.  First, above his heads we find this trio. 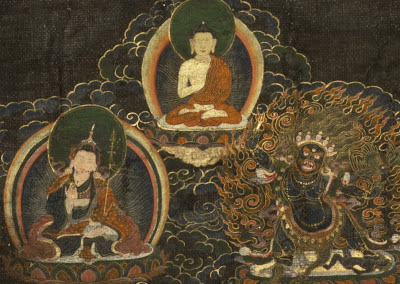 Just a couple of normal enlightened deities, chillin’ on their standard-issue lotus-blossom clouds.  And this guy. 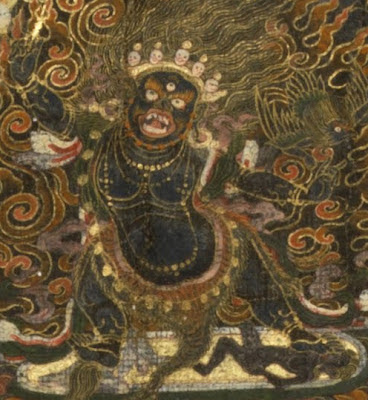 He’s all like, “RAAAAAGHHHHH!  MERE MORTAL!  I SHALL STOMP ON YOUR FACE WITH MY STUMPY LEGS FOR ATTEMPTING TO STEAL MY SACRED CHEESE STICK!” 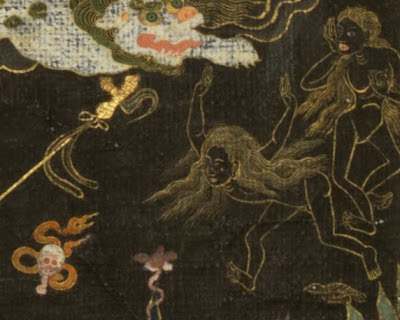 Then there are a couple of invisible naked androgynous-types, pretending to be birds as they chase after a giggling flaming skull.

I think this guy is my favorite, though. 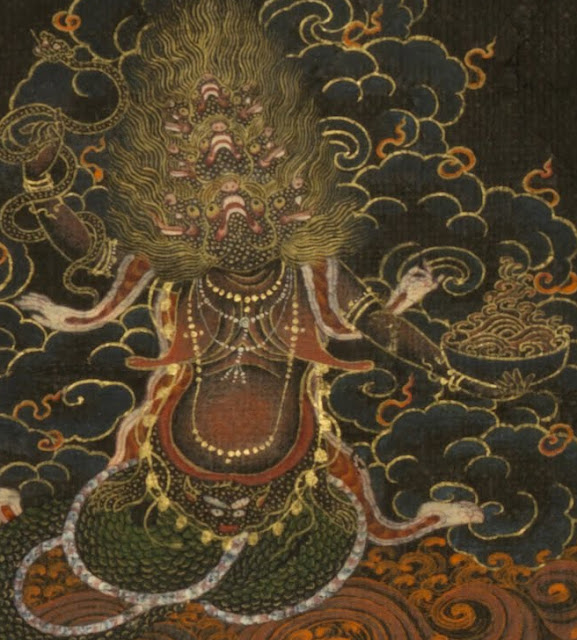 His many faces twist in rage, hair standing on end, shaking his rage-snake at the heavens.  I assume his anger is related to the bowl of what appears to be noodles in his other hand.  I pale to think of how the divine noodle-shop messed up his order.  “I said no spring onions!  PREPARE FOR VENGEANCE!!!”
Posted by Sarcastic Ninja at 09:22 17 comments:

Triumph of the Citrus Prince

I thought I would try to steer away from “Bare Boobs and Breastfeeding” as a primary theme this week, and instead return to another much-loved theme in art, “Hubris.”


This is Frederick Henry, 17th century Prince of Orange, seen here after a tragic accident involving a pencil sharpener, his face, and severe neck trauma requiring use of a Lace Brace. 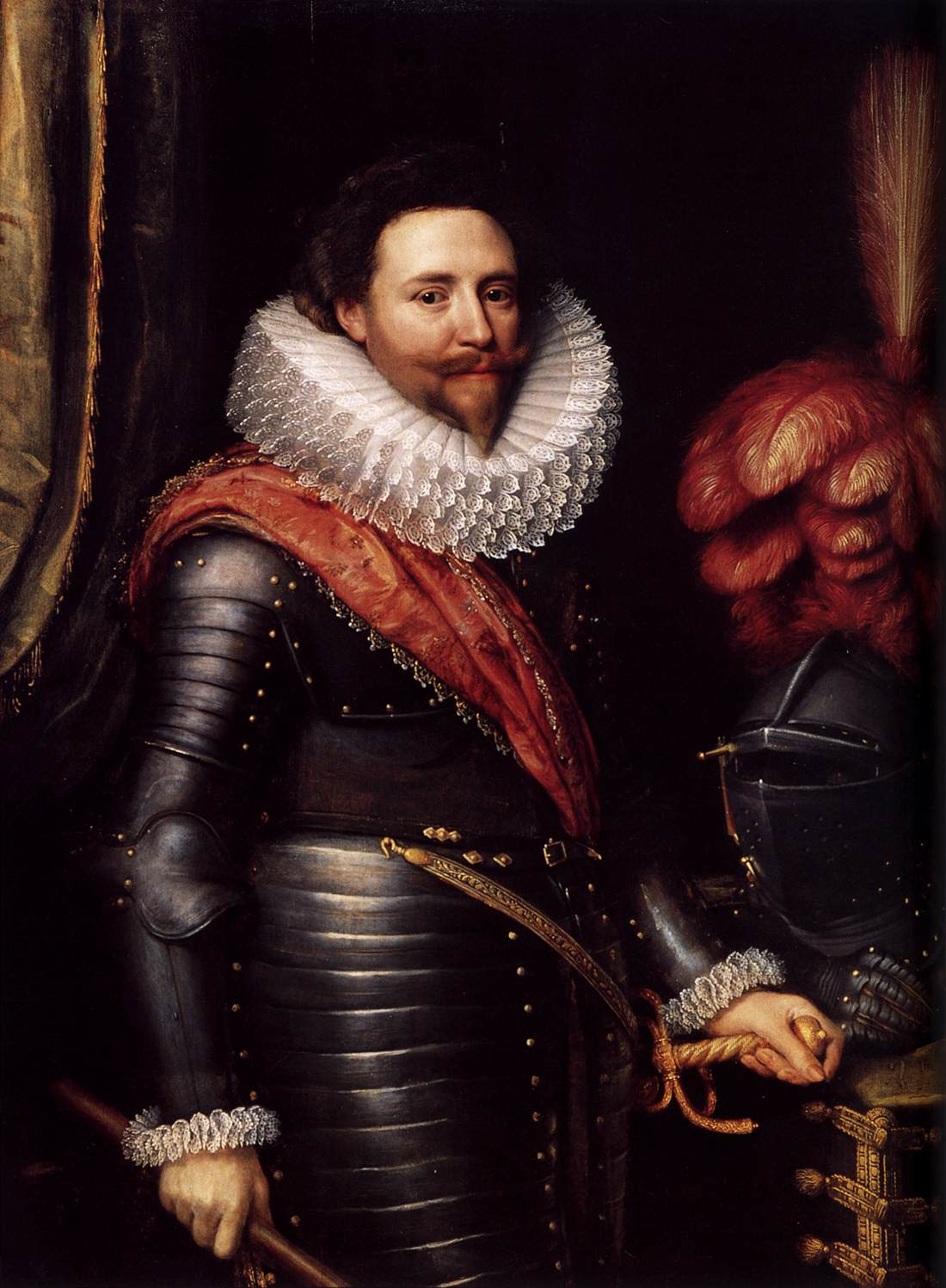 And this is the “Triumph of Frederik Henrik,” by Jacob Jordaens. 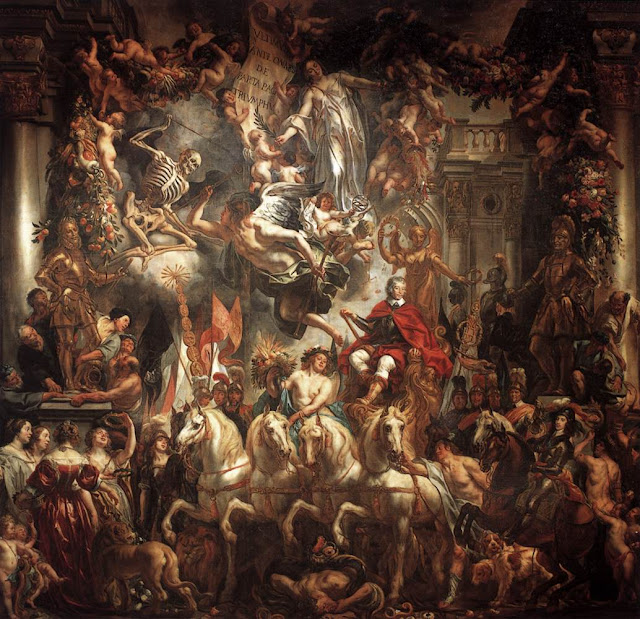 It was a modest triumph, really.


I should note that this was commissioned by Frederick Henry’s consort after his death, to show how awesome he was.  But really it goes to show that he couldn’t triumph over death.  I assume that that is why Skeletor here is about to stab that pansy angel in the face before moving on to Freddy. 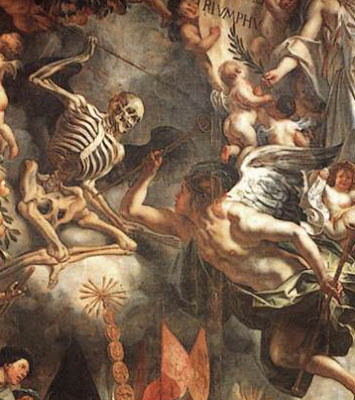 Elsewhere in the heights the Baby Vine crop is literally dripping with fruit, ripe and ready for plucking.  Mmm, plump, juicy babies. 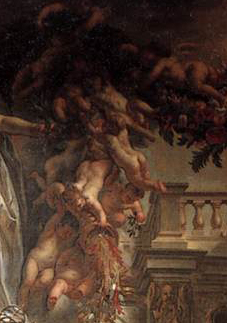 Back down on the ground, a naked Father-Son duo practice for their entry to the Hawkeye Initiative.  Curve those spines and pop out those tushies, boys!

The son looks like he’s getting up to some mischief, inciting a stampede in the middle of a crowded plaza.  This guy has already been trampled to death by overexcited horses.

This is why you should always adhere to the maximum capacity warnings for public spaces.  Here it was 100 people OR 50 horses OR 2 hungry lions. 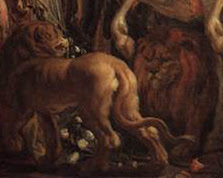 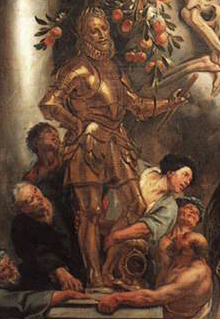 A few men apparently have a brilliant scheme to steal this life-sized golden statue while no one is paying attention.  HEEEEAVE! 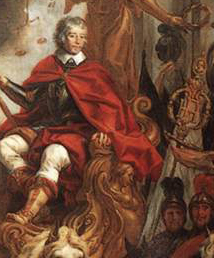 Finally, we have the center of attention himself, His Godliness Frederick Henry.  He lounges casually on his golden chariot, serene in the middle of all the chaos.  Beside him is his trusty staff.  He has apparently taken the Anime approach to weaponry, with the assumption that the bigger the sword the better.  Or maybe it’s just his consort’s wishful thinking.
Posted by Sarcastic Ninja at 06:58 11 comments:

No Thanks, I Quit Drinking (Breastmilk)

Dear readers, I apologize for being remiss here.  These are hectic times, and at the end of the day I've been tired and uninspired.  But for the sake of keeping on the sporadic blogging bandwagon, I present you with this, which is vaguely in line with the theme from last time.


This is "St. Nicholas Refusing His Mother’s Milk,” by an unknown artist.  Apparently St. Nicholas' mother has vases for breasts.  Either that, or she's pointing a flesh-colored water balloon at her son.

St. Nicholas himself appears to have been cross-bred with a caterpillar.

And this is the conversation they are having, apparently having been locked in a battle of wills for about 3 days straight.