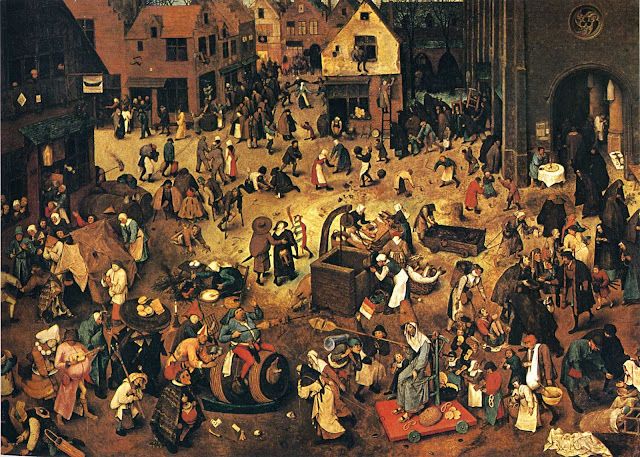 Technically, this is a representation of a traditional event where avatars of Carnival and Lent would battle, with elements of the pious or wild and wacky elements of human nature going on in the background.  It is also chock full of allegory.  But thinking about allegory requires work and research, so we’ll just look at it all literally, shall we? 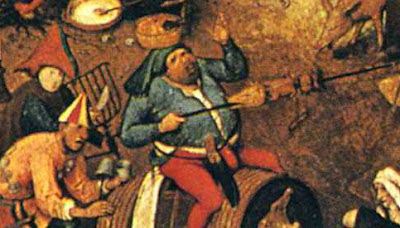 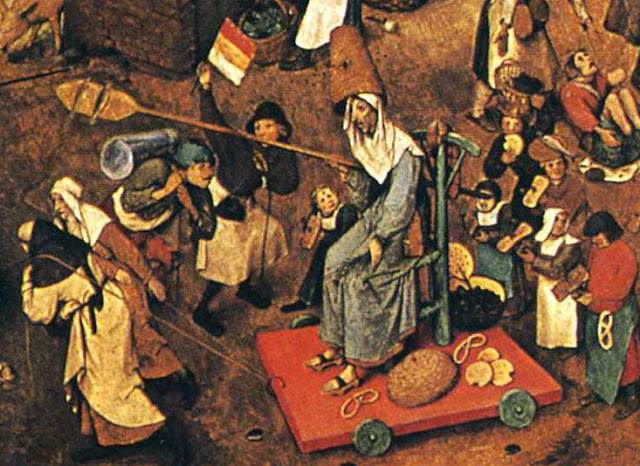 A woman (?) with a bucket on her head being pulled on a cart by an elderly monk and nun, distributing pretzels.  Her weapon of choice is a paddle with two fish on it.  I think Carnival has a distinct advantage with the pointy stick.  Also I am not sure what that guy in the upper right corner is doing.  Three of his limbs appear to be amputated.  Did he just flop himself into the middle of the square?  Why is he using a stump to reach for alms instead of, say, the one hand he still has?  Is he in the middle of inventing breakdancing?

Moving on, the Carnival gang continues to rock the amazing hats, with this group featuring a bard with an upside-down pot on his head, a man wearing an inverted nose, and another guy who seems to have strapped waffles to his temples. 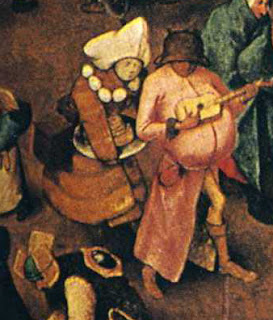 Waffles seem to be the ultimate in non-Lenten indulgence, on par with a slab of steak or a kinky cosplay lapdance.  Wikipedia confirms that this Carnival follower is “a female figure who is carrying on her head a table with bread and waffles on it.” 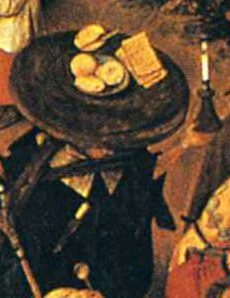 Mmmm, drizzle that maple syrup all over, baby.  Other signs of intemperance include… 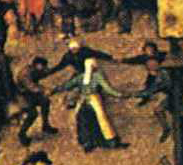 OH GOD!  THEY ARE SINGING RING AROUND THE ROSY!!  Children, avert your eyes from this lechery!!

Meanwhile, a fairly patriotic imp-demon leads this hunchback and his wife to the pub. 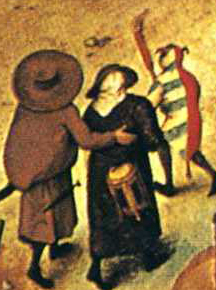 Even the town’s amputees have ganged up.  One of them seems to be wearing a lampshade and a pimp-cape.  Also, the guy on the ground that still has all his limbs looks like he’s trying to hold down a couple of turtles from making a break for the village well and freedom. 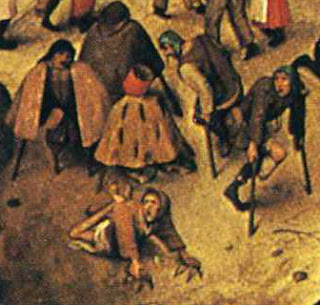 So what about at the church?  Wholesome activities must abound to counteract this blatant carnality! 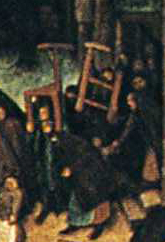 …And chair theft.  Apparently chair theft is the proper way to celebrate Lent.
Posted by Sarcastic Ninja at 09:35 4 comments:

This week I am super excited to present the first installment of Peter Paul Rubens' Medici cycle.  This is a collection of paintings that Marie de' Medici, wife of Henry IV of France, commissioned to immortalize her life.  No, seriously.  The set ends with her taking her place as the Queen of Heaven.  But we’ll get to that.

This stellar example of narcissism comprises 24 paintings, most of which are 4 meters tall by 3 meters wide.  Compare THAT with the 8”x10” portraits your parents used to hang on the wall.  Except instead of being purchased by her parents, they were ordered by her.  And instead of Photoshop to make her look good, if Rubens depicted anything bad about her, she might have exiled him or lopped off his head or something.  The result: a truly divine, carefully edited life-story scrapbook taller than your house.

The series begins modestly enough, with Zeus and Juno hanging out, doting and thinking about just how great this new baby they’re sending into the world will be.

The three Fates, not allowed clothes until they have finished doing all of their divine weaving, are busily spinning, measuring, and cutting the thread of Marie’s destiny.  However, “in Rubens' depiction…the scissors necessary for this cutting are omitted, stressing the privileged and immortal character of the Queen's life.”  That’s right, Marie is basically Goddess on earth, and beyond all normal human concepts like “eventually dying.”

Also there is an eagle whose talons appear to be on fire.  Because, you know, GOD STUFF. 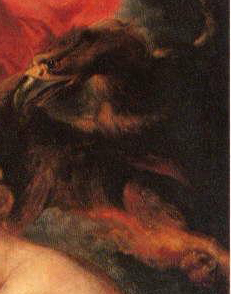 Moving on to the next painting, it shows Marie’s birth into the world.  Hallelujah!  She’s here!  Look at her golden halo of awesomeness!  Angels frolic in the skies! 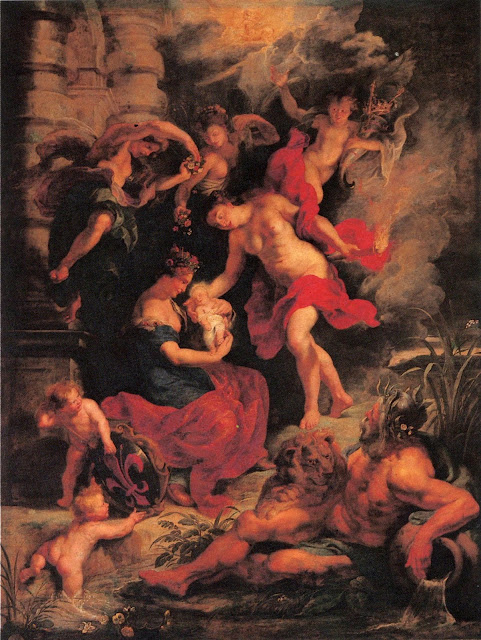 Is that a faint golden centaur doing a victory dance? 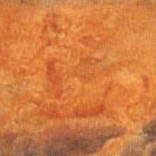 At the bottom we see that a lion has been brought into the birthing chamber, presumably in case the newborn turned out to be the Antichrist.  Or a tasty gazelle.  Bored and hungry with the actual result, he sulks. 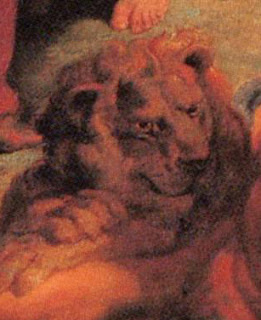 Officially the old guy hanging out with the lion, sprawled on the ground with a tipped-over vase spilling water, is a “river god.”  However, I like to think that he is actually her grandfather who got drunk and passed out naked over the course of the labor. 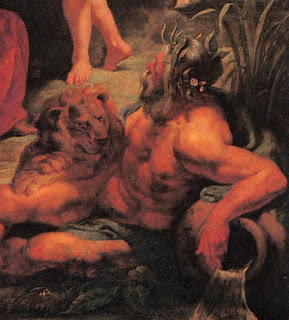 Finally, let’s take a closer look at the frolicking angels.  Here is the one closest to the baby queen, tenderly holding her head. 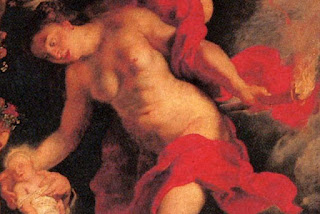 Um…is that “tenderness” or “intention to smoosh that precious little face with a burning torch?” 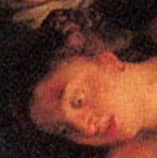 Sleep well with that face in mind, little baby.
Posted by Sarcastic Ninja at 09:43 4 comments:

St. Anthony may well be the most tempted saint in history, as we have already seen him fending off distraction here and here.  Now he is tempted once again, in this 19th century painting by Félicien Rops. 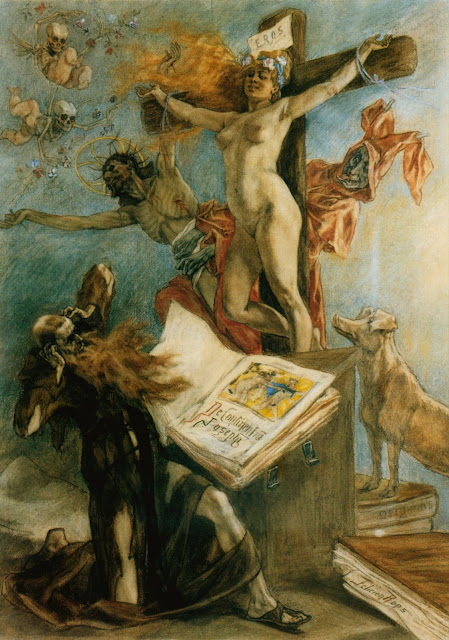 At least here the temptation is an attractive naked lady inviting him to engage in kinky bondage play, as opposed to cow-skull sausages or scimitar-wielding mutant fish.  So that’s a point for realism, I guess?

I’m not quite sure what the orangish cloud next to her head is supposed to be.  I assume it is hair extensions, but it is such a different consistency to the hair done up in a flowery beehive that it just looks like the air next to her is spontaneously combusting, making tasty stigmata-hand barbeque in the process.

To sweeten the sexytime deal, there are these adorable half-cherubim half-skeletons floating about with rosy cheekbones, looking quite joyous as they frolic in the midst of the world’s saddest attempt at tossing a bouquet. 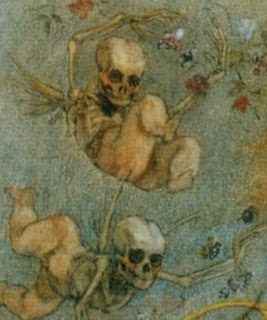 However, all is not flowers and sensuous hips.  The noble pig-dog looks on disapprovingly at this scandalous naked lady.
Saint Anthony himself does not look impressed, shrinking away in horror from Lady Eros and her meticulously maintained Brazilian.  He is so distraught that his amazing beard is blowing in an entirely different direction than her hair a few feet above.  We might notice that he is covering his ears rather than his eyes, however.
Of course, this reaction might have something to do with the fact that immediately behind this sexy chick is this guy. 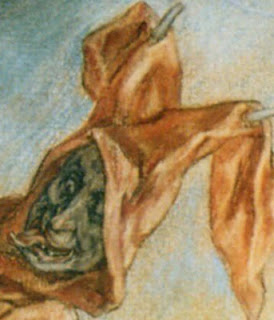 Satan might want to know that lady-type seduction is more likely to occur when there isn’t a demonic horned jester staring and licking his chops right behind her.  Also he may or may not be doing inappropriate things with that stiffened, decaying body, which probably doesn’t help the whole temptation thing.

So, for the record: attractive lady tied up with silk ropes and smiling – possibly tempting.  Bloodied dead bodies embraced by emaciated goat-demons – not tempting.  Try to keep it straight, Dark Ones!
Posted by Sarcastic Ninja at 07:13 2 comments:

Gain Financial Security - Trample the Bill Collector With A Horse

This week we take a quick look at “Heliodorus Driven from the Temple,” by the 19th century French artist Eugène Delacroix. 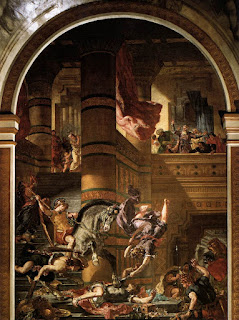 The painting is based on a story out of the book of Maccabees.  Some dude from the tribe of Benjamin falls out with the high priest, so to get revenge he tells the government that the Jewish temple has an unspeakable amount of money stored away.  The king sends Heliodorus to collect some of it, but the priests in the temple are all “But we don’t have much money really!  And anyway, none of your socialist taxes bullshit!” and they pray to God, who sends a dude on a horse with two other guys to teach the everyone a lesson by beating the crap out of the king’s messenger.

The story specifies that the horse “smote at Heliodorus with his forefeet,” which normally I would think would be enough to smite the sternum in half right into the chest cavity, but apparently flogging was also deemed necessary.

Note that the guy on the horse is simply described as “terrible” with nice clothes, and the two other lackeys are just young, beautiful men in comely apparel—you know, typical divine brawlers.  I guess I personally would have sent angels or some kind of supernatural creature with fire for arms or something, if I were God and wanted to instill some fear in people, but I guess three guys with a horse and some sticks were enough.  However, apparently Delacroix agreed with me and decided this wasn’t fearsome enough, giving the horseman some wings to show he means business (although why he needs the horse if he has wings is beyond me).

As for the floggers, it seems he interpreted them as either being excellent gymnasts, or as having a pocket anti-gravity device.

Morals of the story: never trust a Benjaminite, and get better lackeys.

I mean that literally, so if you are squeamish about drawings of genitalia, you should probably leave.

Campaign ads sometimes try to portray the horror of what life will be like under the terrible reign of the opponent.  This election in the US there was Obamaville; in the 90s, the UK had New Labour, New Danger.  Flash back several hundred years in Italy, and we can see that politically freaking out the populace through images of a terrifying future was, if anything, more bizarre and hardcore. 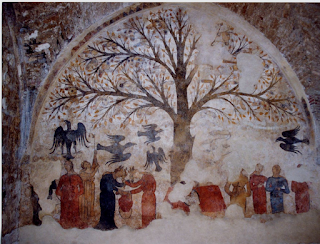 This damaged 13th century mural in Massa Marittima depicts ladies hanging out under a fruit-bearing tree.  The fruit is all rather firm, plump, and ripe for the picking.

Two women battle over one that must be particularly delectable, trying to rip each other’s hair out.

And finally, this demure lady stands there beatifically with one protruding behind her, which I am sure is being held there by an open backpack and is in no way being utilized in a suggestive manner.

Imagine if modern politicians embraced this method of striking a chord with voters!  Forget warning about diminishing freedoms or the state of the economy.  “If you vote for the Y party, roasted testicles will become the national dish!”  “If you vote for Candidate X, vaginas will spring forth from the earth and devour all males!”

It would probably be at least as informative as current campaign ads, anyway.
Posted by Sarcastic Ninja at 13:31 2 comments: