Rebels Without a Cause: Divine Edition

This week’s artwork is a treat that I have been saving for a special occasion.  We’ve reached the end of another year without major horseman sightings or planetary core explosions, and also this is SARFT’s 50th post, which is almost as momentous.  Thus, I present to you the Fall of the Rebel Angels by Pieter Bruegel. 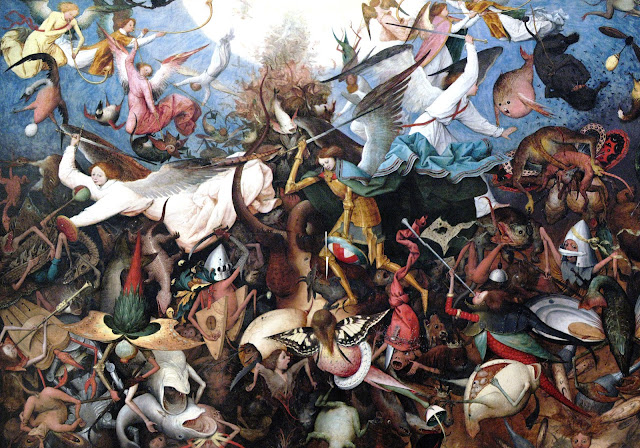 There is so much going on in the picture, you will see something different every time.  The following is just a selection of the first things that caught my eye.  It might be a fun New Year’s Day hangover activity to see what different details you observe.  If you look at it under the influence of other substances, I take no responsibility for the results.

So let’s begin with the bird-lizard unbuttoning its stomach to reveal a batch of cracking eggs full of blackness. 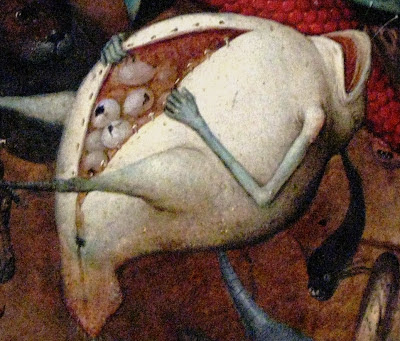 I think a lot of women would prefer if they could just unbutton the ol’ womb to release their babies.  Seems like a lot less mess, anyway.  Maybe it was a feature that was removed from humans as punishment for their involvement with the fallen angels.

Looking on at the button-down hatching are a couple of adorable doggies wearing crowns. 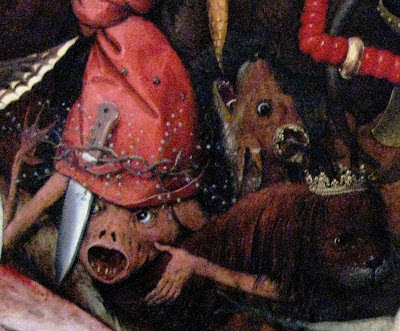 There’s also a deformed pig with bad teeth wearing a red bedsheet turban and a crown of thorns laced with pearls.  Instead of carrying his knife somewhere inconvenient like a side holster, he keeps it strapped over his eye, in case anyone throws any vegetables at his face sideways.

From there, we move on to an upset-looking lady with disjointed elbows and nothing below her ribcage. 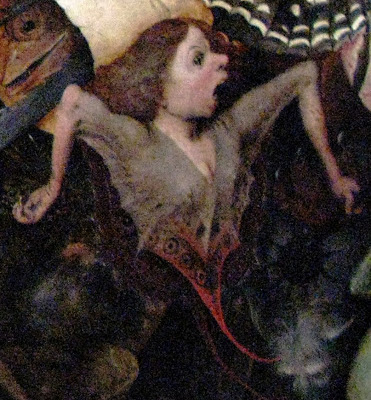 I’m not sure what she’s contributing to the battle.  Maybe she has a supersonic scream?  I’d be screaming if I was reduced to half a torso and my arms were broken, anyway.

On the warrior side of things, there is the fearsome Sandwich-Board Man. 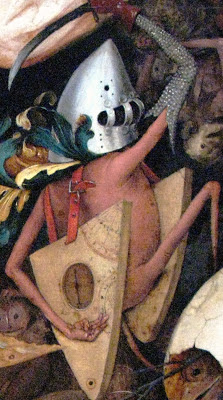 He seems to have taken design tips from female fantasy armor principles: less is more. By covering his bum and key front bits, a token fragment of chain mail, and some pointless frills off the back of the helmet, he will be totally defended.

But you know what is more fearsome than a scantily clad man with a scimitar?   BEES. 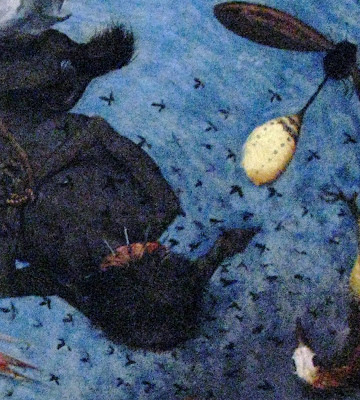 A flying tied-up dog-thing in a spiked collar is brutally attacked by a giant moth bearing a killer beehive.  HEAVEN’S ULTIMATE WEAPON.

Next to this stinging blow, we have Hell’s Kirby. 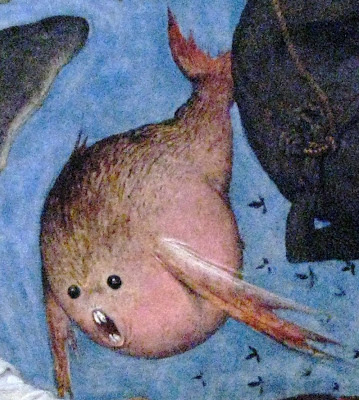 With fish fins and beaver teeth, the adorable video game icon is transformed into a horrifying soulless creature that will fly in your window and gnaw you to death before swallowing your bits and absorbing your life force.

Moving along with fishy things, here are a couple of whales with arms locked either in Kama Sutra passion or a death-struggle. 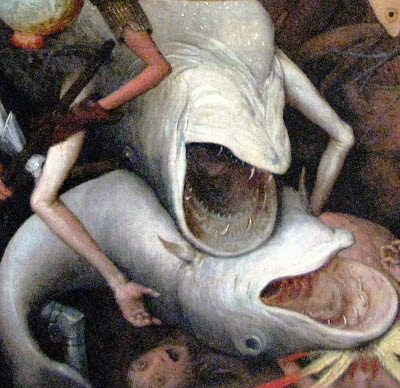 This one was mostly noted because of the horrified human face below them going “OH GOD MUTANT KILLER WHALE FIGHT. OR SEX.” 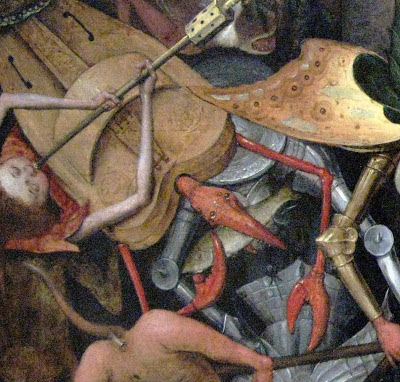 The armor in the background suggests that robots may also be involved in this battle.

Last but not least, this poor fish-man is desperately trying to defend his basket of innocent baby fishlings, while a “good” angel calmly shield-punches them into oblivion before chopping their heads off. 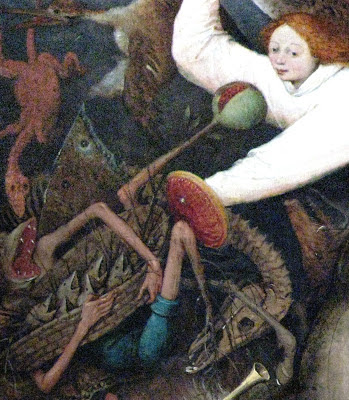 At least, I assume it’s supposed to be a good angel – it would certainly make a more interesting story if the normal-looking ones were the rebel angels, causing havoc amongst the innocent creatures below.  In any case there is a dinosaur skeleton there, suggesting all these creatures once roamed the land and were tragically made extinct.  Maybe dinosaurs were actually either rebel angels who suffered divine retribution, or were destroyed by rebel angels running amok.  Either way it paints a badass picture of an angel-dinosaur battle.  And it's important to learn all theories of how the Earth and its life came to exist or cease to exist.

So that’s what I see.  Sadly no one wants to go with me to art museums anymore because they “can’t unsee these things” and “the nightmares last for weeks.”  Thus, I have to share these things with you, dear readers.  Thank you for reading, and have a happy, apocalypse-free New Year!
Posted by Sarcastic Ninja at 12:56 18 comments:

No Room at the Inn? Angry Baby Summons Pokemon

Well, Christmastime has come once again.  Or the non-denominational winter holiday of your choice.  But for purposes of this post, we’re looking at a representation of the birth of Jesus Christ, in part because there are lots of such paintings, and in part because what kind of Kwanzaa-Chanukkah-mas art is available in the public domain?

(Note: there is probably lots of it, and it is probably pretty hilarious, but I am too busy to look right now.)

Amongst the wide offerings available on the theme of Jesus-birth, we’re going with one by 15th century Italian artist Antonio Vivarini.  As we all know, the story goes that Jesus was born in a manger because there was no room in the inn, and then a couple of shepherds and/or some wise guys turn up later on because his birth horoscope said that the stars would bring him presents of metal and things to burn. 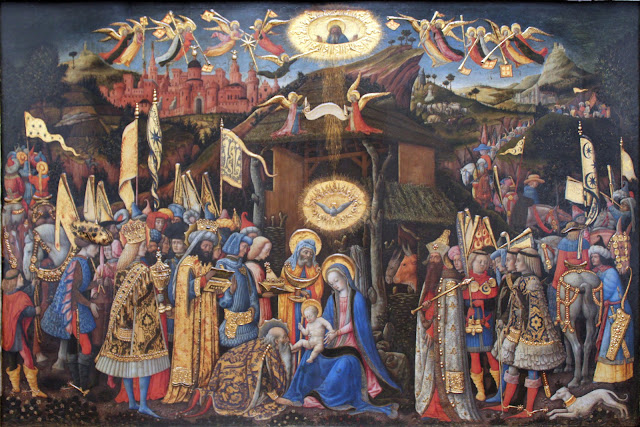 Well, it looks like there must be plenty of room at the inn now, because the entire country has turned out to see the baby.  And what kind of jerk wouldn’t give up his room to a family with a newborn?  Heck, I’m pretty sure some of those guys must be traveling with tents or a cozy motorhome with pop-out beds.  But apparently they are all jerks, because out in the open Baby remains, surrounded by incredibly sullen people. 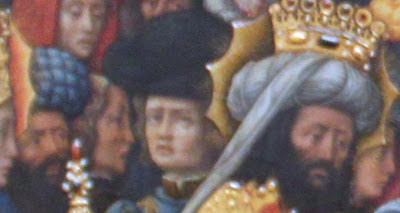 Seriously, look at these guys.  This is just a small sampling, but nobody in the crowd looks happy to be there.  They’ve presumably come to pay homage to the newborn king, or because their daily horoscope said to hang around mangers for good fortune, or because they’ve been having visions of angels, but all of them look like they’d rather be home watching Judge Judy.  Even the parents. 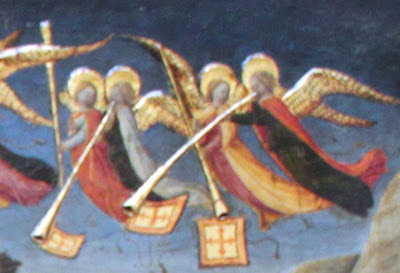 The only excited ones?  The angels.  But I think they are excited because they have didgeridoos to announce the news, and who wouldn’t want to fly around with a didgeridoo? 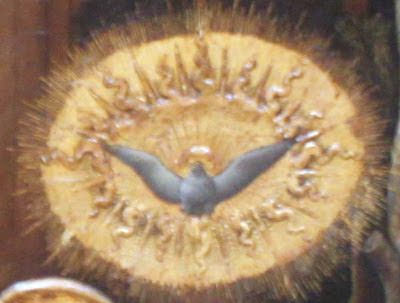 Above the baby is a pigeon emitting lightning.  I assume this was the pre-evolved form of Pikachu. 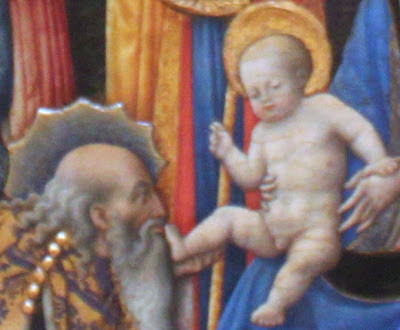 Finally we have Baby Jesus himself, who is perhaps the most annoyed person there, as evidenced by the fact that he is kicking an old man in the face.  He must pack quite a kick, as the man has a cartoon-style shock aura around his head.  I kind of like the idea of kung-fu baby Jesus, irritated that all these people have come to sulk around him, but nobody is willing to give him a friggin’ bed indoors.

Happy holidays, everyone!
Posted by Sarcastic Ninja at 13:11 18 comments:

This week our entry is short and sweet: “Friar Pedro Shoots El Maragato as his Horse Runs Off,” by 18th/19th century Spanish painter Francisco de Goya. 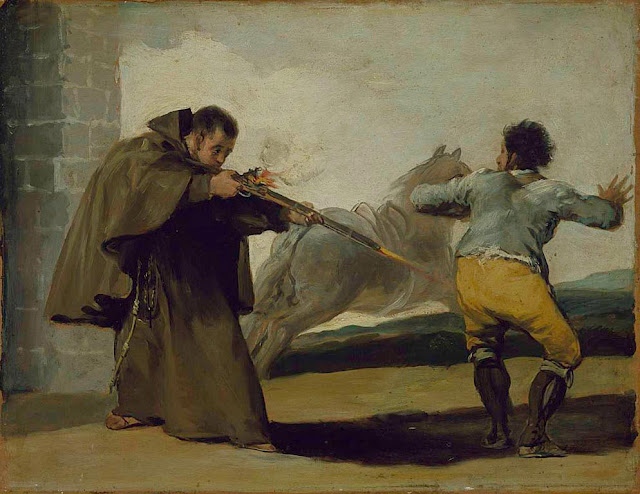 This is a painting of a friar calmly shooting a man in the butt at point-blank range.  I really have very little to add.

However, as that makes for an awfully short post, here is another picture with a friar theme!  I came across it during my recent journey to Los Angeles in the El Pueblo area.  It was unlabelled so I do not know the title or artist. 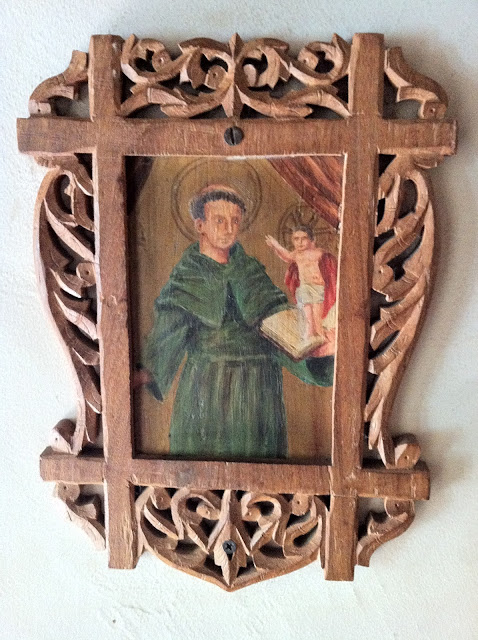 I DO know that it depicts this nightmare I have every time I open a book that a baby (or adult dwarf?) in a diaper and cape will leap forth and attempt to poke my eyes out.  Because you never know where anti-learning babies are hiding.
Posted by Sarcastic Ninja at 18:28 19 comments:

And for Dessert, Murder!

In my Thanksgiving post I mentioned that a search for feast paintings turned up some fairly non-Thanksgiving-appropriate results.  Well, maybe appropriate for some families, but I don’t think I want to know.  I thought this week I would cover one of those.

We have a Peter Paul Rubens painting that is not related to Marie de Medici.  Instead of a megalomaniac queen and her polyamorous husband, this time we have a good, wholesome Bible story: The Feast of Herod.

The story goes that Herod divorced his wife and married Herodias (because matching names are totes adorable!), the wife of his brother.  John the Baptist pointed out that this was perhaps not the most moral course of marital action, which made Herodias go a bit murderous wench-y, because women are evil and emotionally unstable.  On Herod’s birthday Herodias’ daughter Salome dances for his party guests, and her moves are so sexay that Herod promises her whatever she wants as a reward for her bootyliciousness.  Instead of asking for a new chariot or Spring Break in Rome, she follows her mother’s wishes and asks for John’s head on a platter. 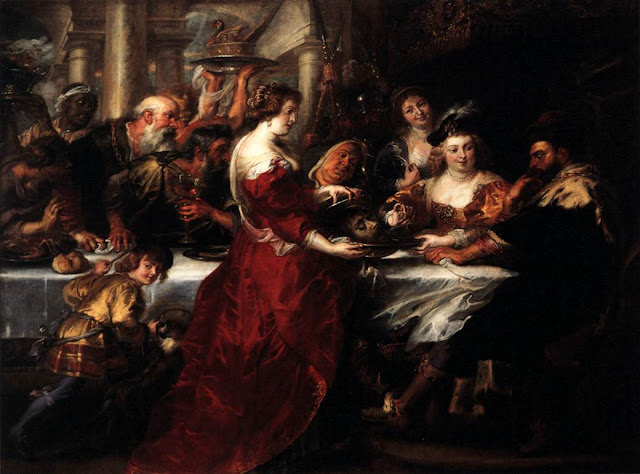 And here it is!  They bring it out right in the middle of the party, because nothing gets the good times rolling like a still-bleeding decapitated head. 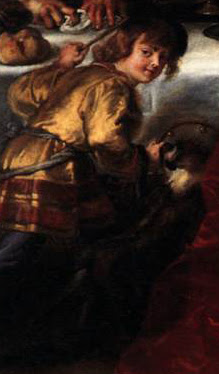 First off, what is this child doing here?  All the adults are hushed in awe that a human head is being given as a gift by the birthday boy, and this kid is like, “You know what would be mischievous?  Playing under the table with my puppy!” 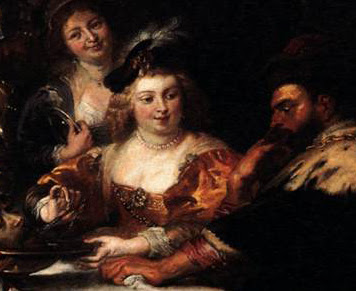 Then we have the presentation.  I assume the lady with a stick in the head’s mouth is Herodias, so her delightful revenge explains her calm smile, but what about the woman behind her that looks even happier?  She gazes on Salome with an expression that says, “Oh, I am so proud of you for fulfilling your mother’s slaughterhouse dreams.”  Is this just commentary about how all women are horrible?  Also, what is going on with the mouth stick?  The expression says not to look a gift horse in the mouth, but I suppose it doesn’t mention gift decapitated man-heads.  And Herod’s expression seems to be, “Oh dear, I shouldn’t have let her ask for this after dinner…how quickly can I get to the vomitorium?”

Finally, there is this guy.

He gazes at the grey, decaying head, and seems to think, “Mmm…looks so delicious.”
Posted by Sarcastic Ninja at 13:20 19 comments:

Getting Ahead in (Still) Life 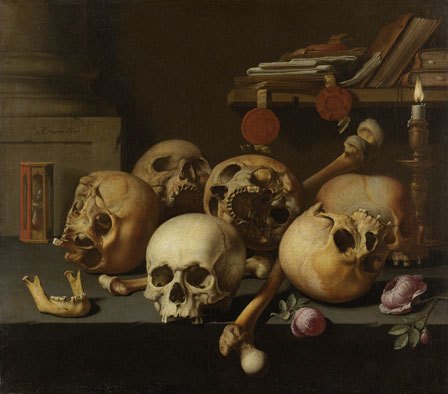 That is some pretty still life.  In fact, I would go so far as to say that it is the opposite of life.  There was apparently a whole still-life sub-genre to remind one of the inevitability of death.  A still death painting?  Clearly they would make excellent conversation pieces to have on your living room wall.

I would also question Mr. Van der Schoor’s hobbies that he had access to a pile of skulls for his model, some of which look pretty bashed in.  Was he a grave robber?  Maybe he was actually a badass gang leader, and he painted this after a gruesome street battle as a warning to other would-be challengers to his position as master gangbanger/artist.  I like to think that the jawbone was his weapon of choice.
Posted by Sarcastic Ninja at 05:23 18 comments: