So, uh…I kind of let this series die.  Much like Marie let her husband die hours after her coronation.  But now I am coming at it with the Defibrillator of Derision, to resuscitate the wonder that is the hubris of Marie de’ Medici. For the earlier installments, see here.

So, the last time we checked in with the Queen of Hearts (Which May or May Not Be Stabbed), she had just taken the reins from her suddenly deceased husband.  Eagles shot lightning, snakes breathed fire, and bare-bosomed personifications of France frolicked.

The next painting, “Council of the Gods,” does not actually feature Marie.  Although with a title like that, doubtless Marie would have thought she fit right in. 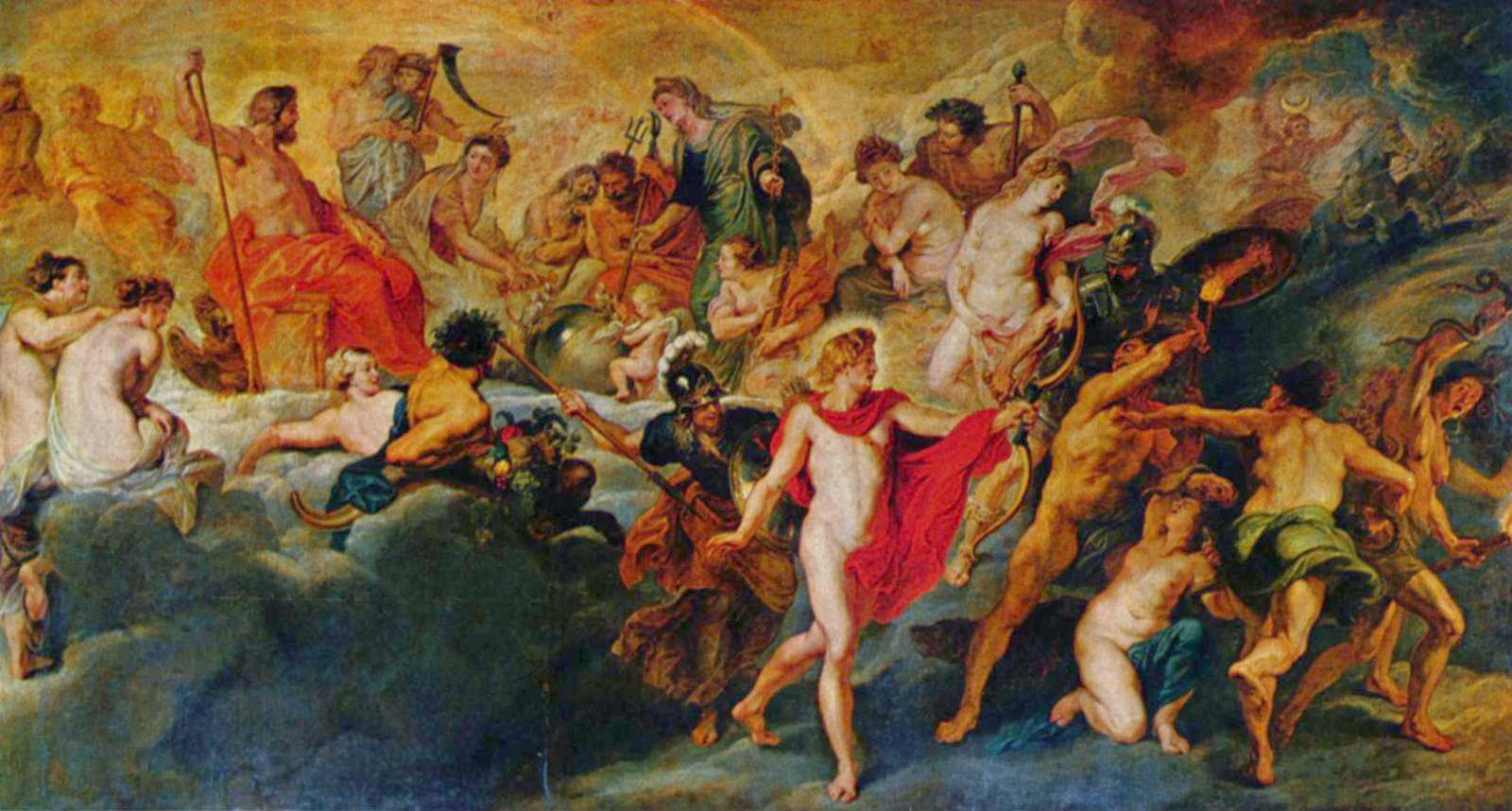 Instead, it focuses on the Greek gods, lounging around and chatting in various states of undress.  I think more councils should take this policy.  I mean, they tell you in public speaking to envision everyone in the audience naked – imagine how much more confidence everyone would have if it were true!

The exception to the happy lounging theme here is over on the right, with these miserable-looking fellows being run out of town. 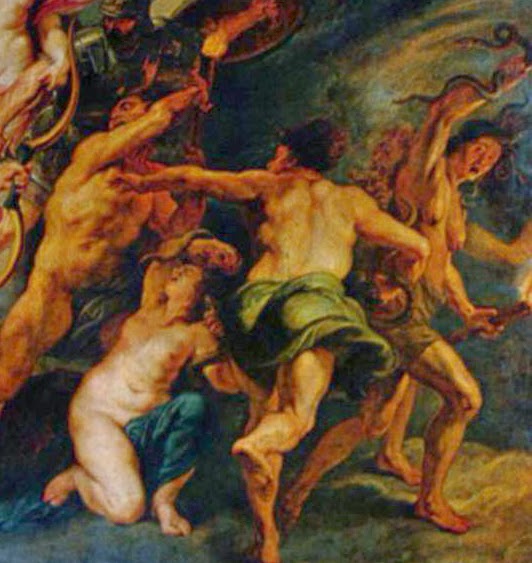 According to the oracle that is Wikipedia, these represent “vices such as Discord, Hate, Fury, and Envy” who are being "overcome" by Apollo and Pallas.  Frankly, I don’t know why they look so afraid of their attackers.  After all, they are armed with torches and snakes, which seem like they would be far more effective at such short range than their assailants’ weapons. 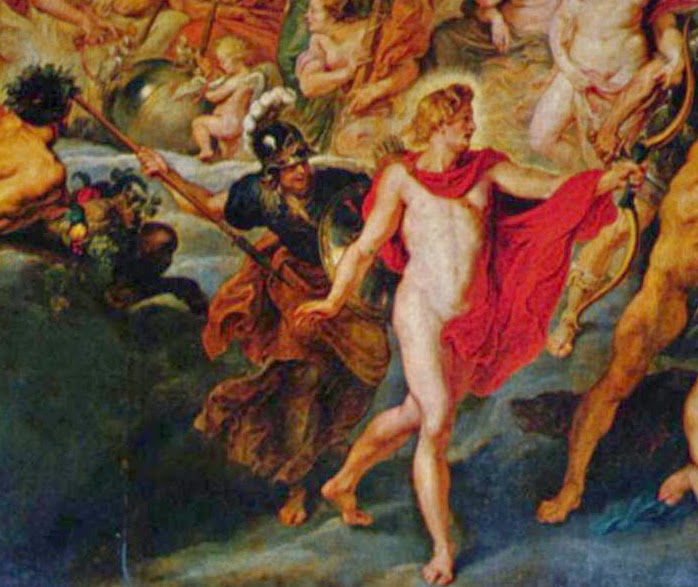 Apollo comes at them with a bow, looking more like he’s offering it to them than attacking them.  I must observe that for the god of the sun, he is EXTREMELY pale.  I guess in his line of work he uses SPF 1,000,000?  Also, at first glance I thought that Pallas’ weapon of choice here was a wildly brandished mop.

Meanwhile, Venus tries to distract Mars with the promise of sexytime with the goddess of love and beauty, but we can all see to which glowing, nude figure Mars’ gaze is drawn. 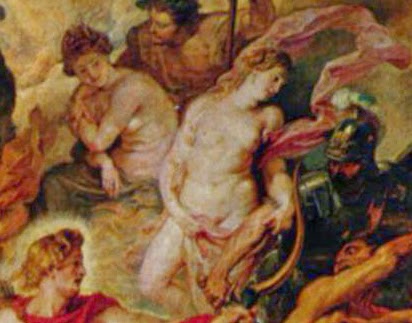 This flaw is fixed in the next painting. 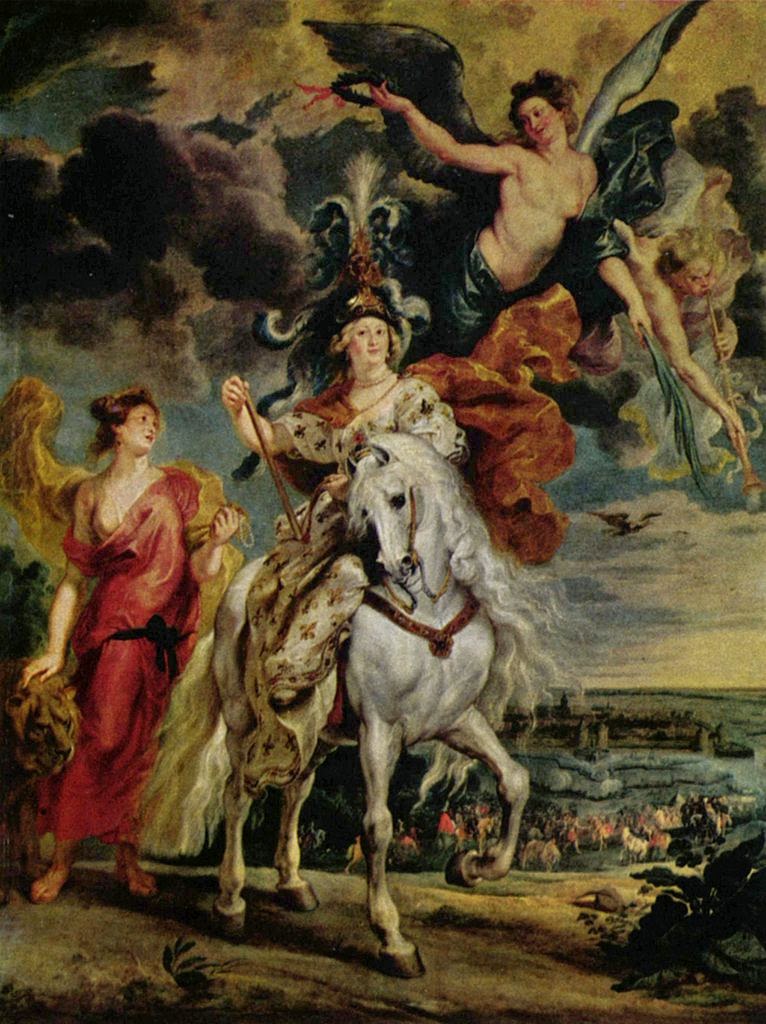 In “The Regent Militant: The Victory at Jülich,” there is no doubt left to the imagination as to who is the most important person in the universe.  She’s all like, “I am the QUEEN of FRANCE, bitches.”

Unfortunately she is mistaken in her choice of terminology, because of course that is not a female dog in her entourage, but rather a male lion.  And frankly, I am far more impressed by the somewhat demure lady patting the lion than I am by the queen on her horse.  If there is one thing we have learned from art, it is that being saddled up will not protect you from an attack of big cats.

The last detail I’ll observe here is this guy, playing a horn:

The Wikipedia description says that “Fame in the right side of the painting pushes air through the trumpet so powerfully that a burst of smoke comes out.”  I take this to mean that her fame, like most, was primarily blowing smoke.

All images found here.
Posted by Sarcastic Ninja at 14:33 7 comments:


So the other day, I said to myself, “You know, self, you haven’t reviewed a freaky painting of hellish torture in ages.”

So then, because I hadn’t had any nightmares in a while, I looked up some Hieronymus Bosch paintings.  In the end, however, it was this copy of a painting of the Last Judgment by German Renaissance painter Lucas Cranach the Elder (modeled after Bosch) that jumped out at me as being particularly special.  As the post title subtly suggests, it’s also not for the faint of heart, so to give those who don’t appreciate images of people impaled on trees and dancing demon heads a chance to leave, here is a picture of an adorable hedgehog with a raspberry.
Have we gotten rid of all the people who prefer tastefulness and a balanced mental state?  Good.  Here we go.

Ok, so there is a lot going on here.  Way too much here to look at every detail, so we’ll just look at some highlights. 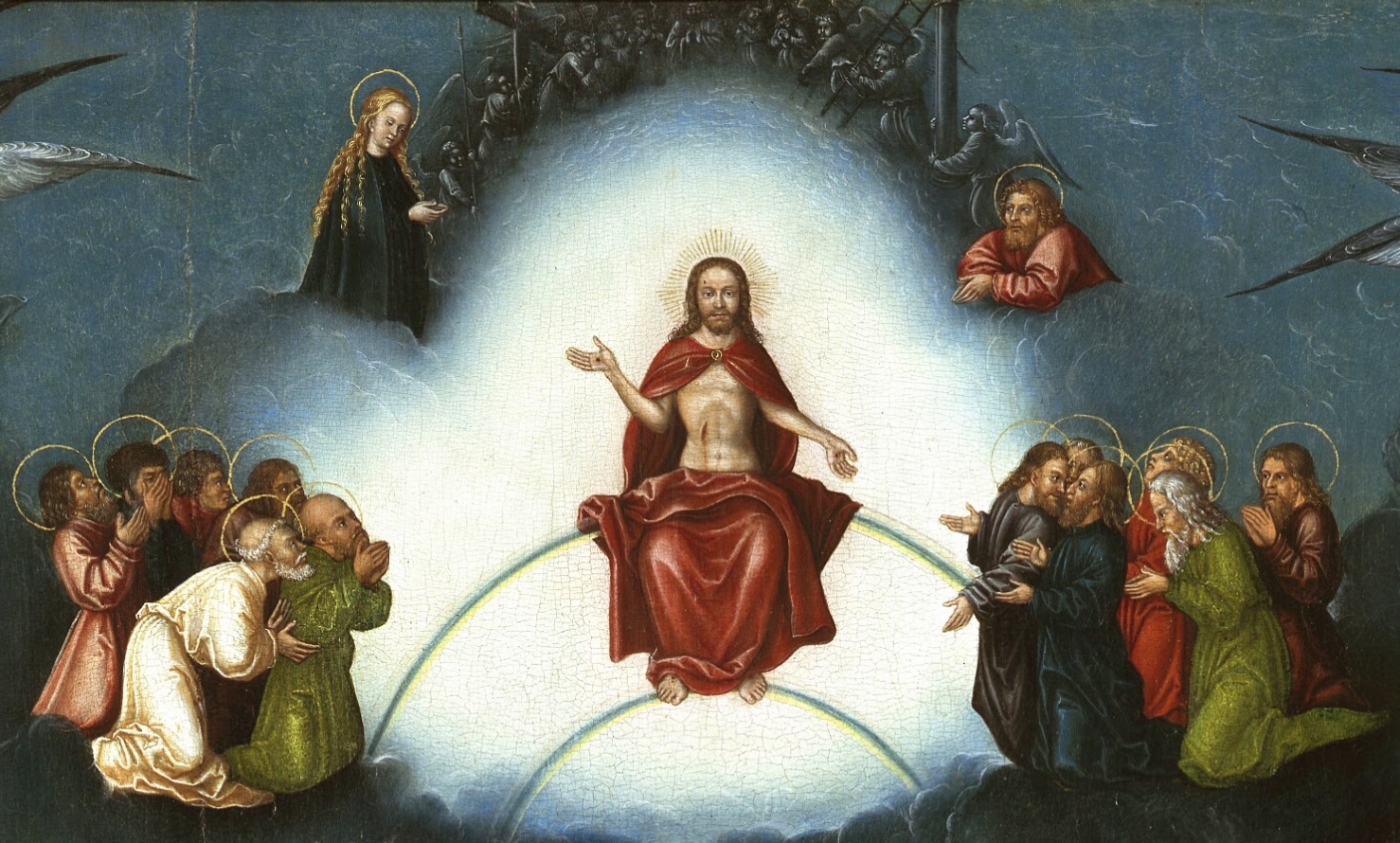 But the disciples are more interesting, huddling and covering their faces in terror.  The guy on the right gestures to the scene below and says to his companion, “Good heavens, I knew judgment would be rough, but I didn’t realize it would involve scimitar-wielding demons wearing laundry baskets and UGG boots!” 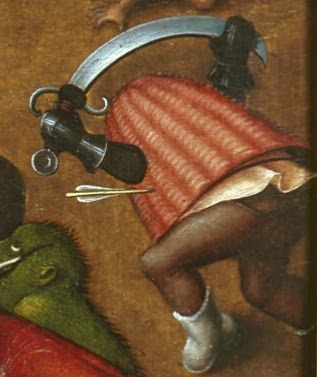 Really, Mr. Scimitar Laundry Basket is the least of the sinful soul’s worries at the end times.  After all, you might be trussed up like a pig, shot with an arrow by an anthropomorphic platypus, and hauled off to be roasted as the supper of two heads with feet but no torsos, arms, or legs.

One of them looks like it really wants to be a thief in a role-playing game, and the other is turning up to Hell’s Butterfly Cosplay Contest straight from his job as a demonic chimneysweep. 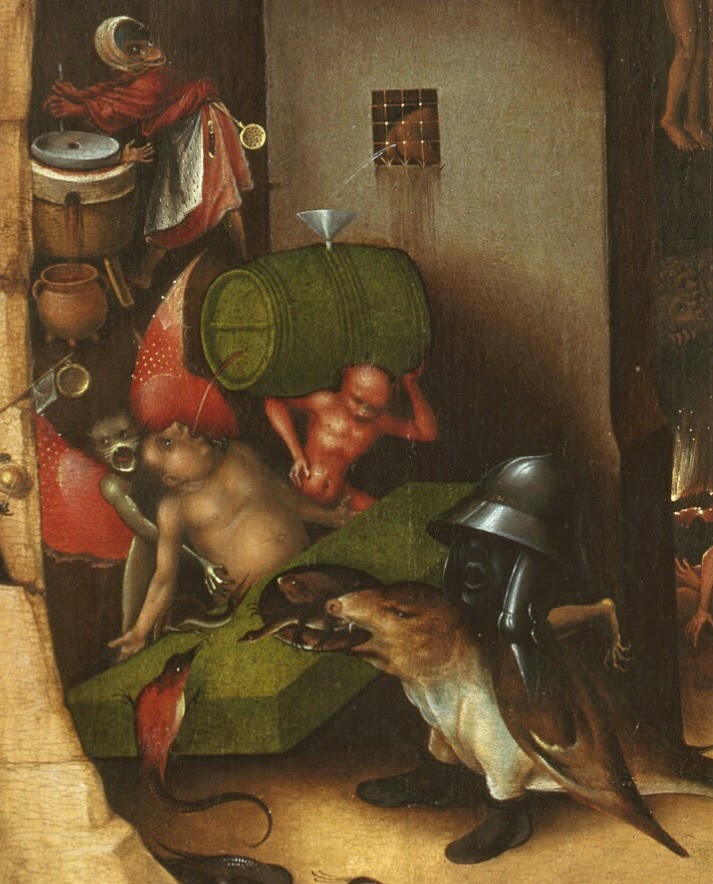 Of course, for the gluttons, judgment has a perpetual stream of piss funneled from a barrel directly into your mouth.  So pretty much like a beer bong of Bud Light.  For the more refined taste, in the back a lady-demon is juicing a person into tasty Blood Wine.  Also, a soulless head wearing a helmet rides a booted seal to steal a plate of lizards.  Because JUDGMENT.

Not everything is terrible in the end times.  You might just meet some fun folks. 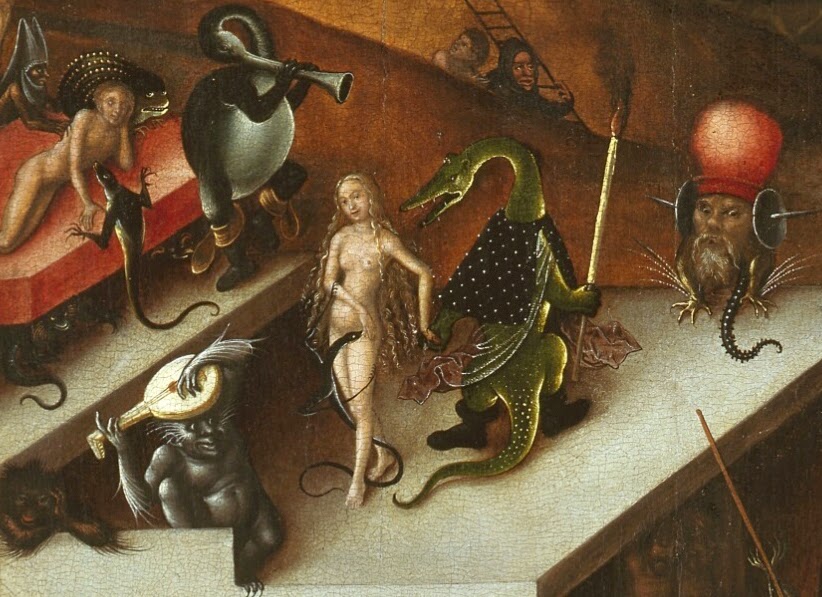 Like this lady, flirting with that attractive lizard man to the dulcet sounds of a monkey on a mandolin and a demon with a very flexible neck tooting his own horn, so to speak.  Another naked person reclines on a platform, getting a massage.  I’m not sure about the head with lizard feet and tail, a hat stolen from the seven dwarves, and out-of-control ear gauges.  He doesn’t seem to approve of the music. 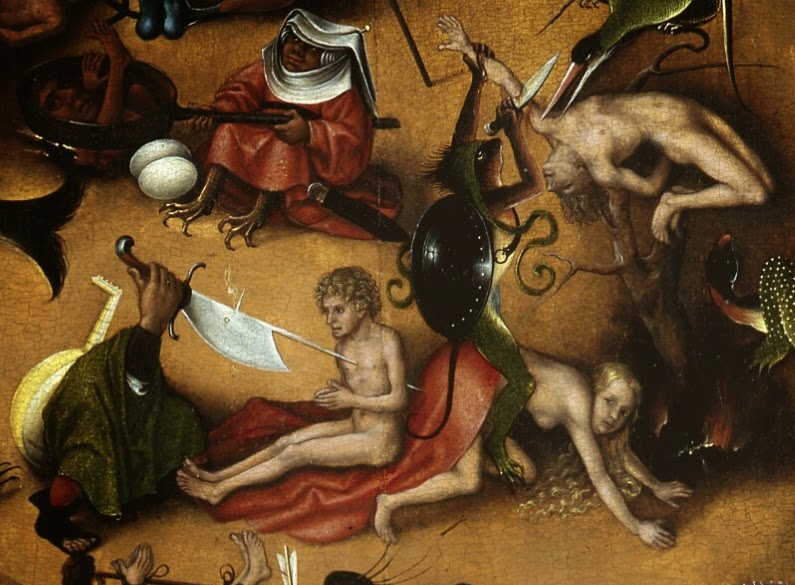 Not all mandolin-players are friendly towards amorous couples, however.  This creature, who gets arms but no head for a change, successfully interrupts sexy fun times with a more sinister impaling.  Meanwhile, a man simultaneously gets his arm sawed off and tickled by bird tongue in the armpit, all while skewered on a tree which may or may not be on fire.  Also, in the back, a remarkably calm-looking man in a skillet gets fried up for brunch.  This is presumably to feed all the demons, who will be hungry after a hard morning of torturing souls. 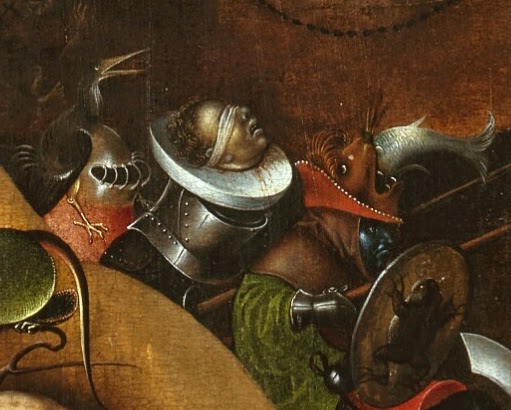 Other creatures that are hungry?  This lion-hat, swallowing a fish whole.  If lion hats are not your style, you might consider a stork helmet, or the popular Blindfolded Decapitated Head on a Plate look.  To be sure to be classified as a Hell Fashionista, all should be accentuated with a roadkill frog on a shield. 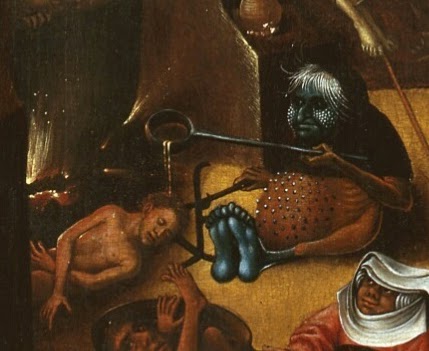 Another stylish accessory option is to get Viserys’ Crown Treatment from the Creepy Blue Babushka Jewelers.

Other exciting activities during the judgment include a delightful Hell-light Gallows Whale Cruise, which offers fantastic views of the festivities…. 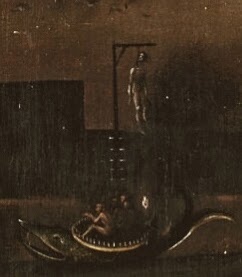 …Or getting fitted with the latest Horseshoes for Humans.  Which I guess are just shoes.  Except hammered into your heels.  Also, you can get a new torso smelted, or the popular Butthole Enlargement with a Hot Spike treatment. 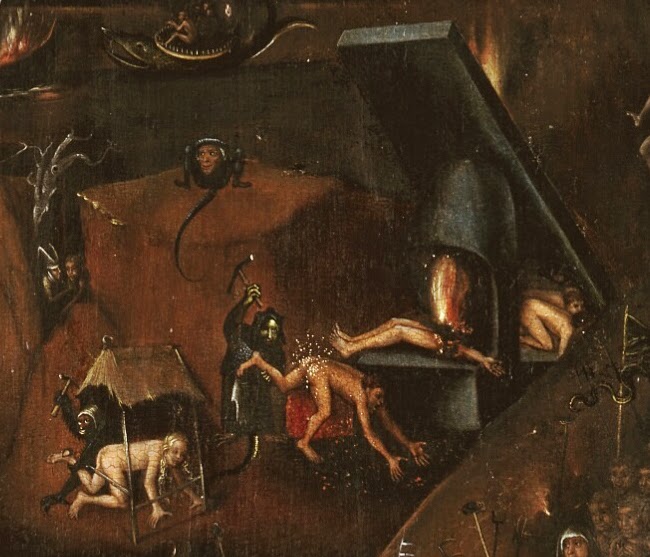 Still, all of these involve a lot of work on the part of the demons.  Isn’t there some way of punishing people with minimal effort on the part of Hell’s Hordes? 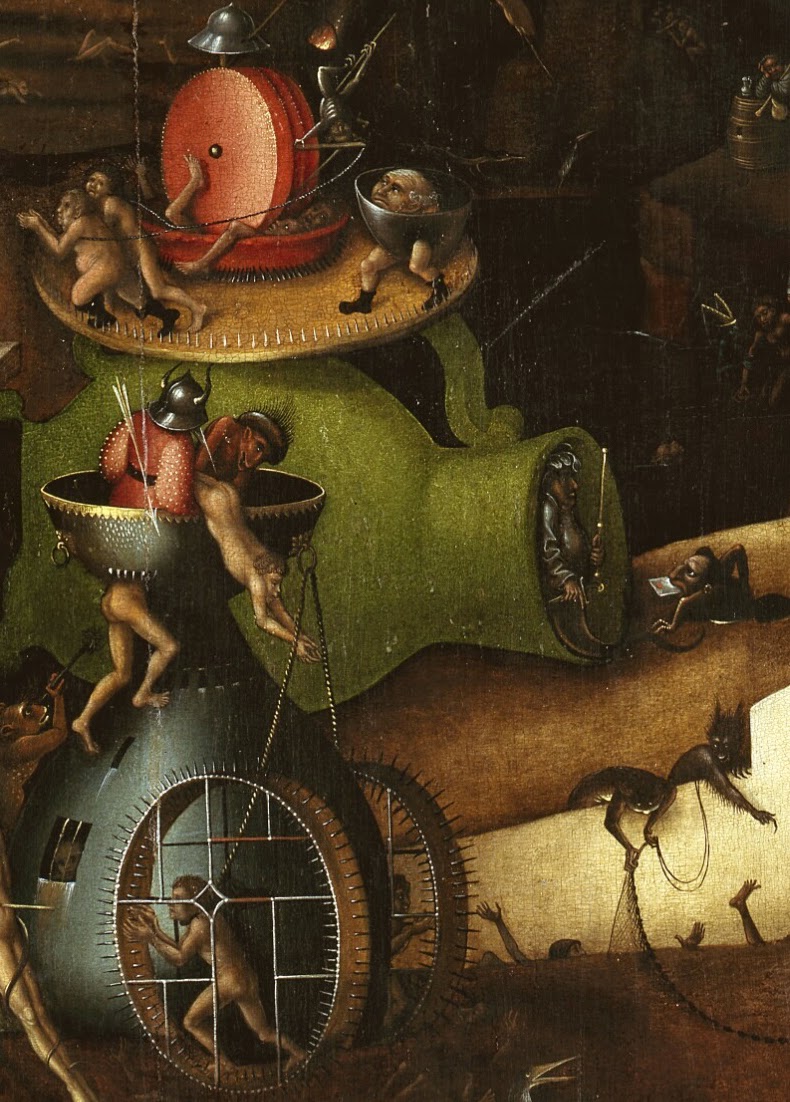 Welcome to the People Pulverizer 3000!  Powered by enslaved souls running in hamster wheels lined with spikes, just feed other souls into the funnel, and quickly and easily grind them into convenient Sinner Pulp.  Excellent for hippies who enjoy recycling and making sure to use every part of the sinner.

I leave you with the image that caught my eye first: 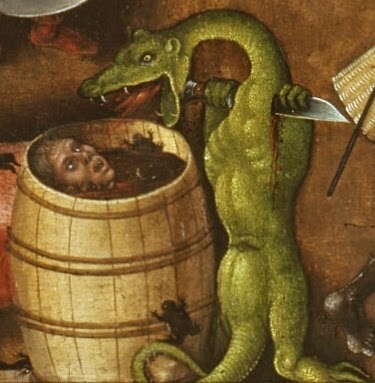 I know that the book of Revelation mentions dragons and three unclean spirits like frogs that appear, but must have missed the part where a suicidal firebreathing lizard slices open its own neck while hissing at a man drowning in a barrel full of blood and frogs.

On that note, have a great weekend!
Posted by Sarcastic Ninja at 14:13 11 comments:

Allegorical Double-Bill: The Agony, the Ecstasy, and Divine Hazing


“Allegory:” I believe this is a code word artists use for their work when they got drunk one night and painted the first thing that came into their heads/sculpted something horrific/trashed some furniture and had to explain it to their roommate.

This pair of paintings by Italian artist Lorenzo Lotto does little to persuade me otherwise.

First: The Allegory of Virtue and Vice.

So, if you live a life of vice, you might die in a shipwreck, but you will have had so much wine that you will not care.  You get a lush field of grass to recline in, fresh grapes, and when you have to vomit, you get a bucket made of solid gold. 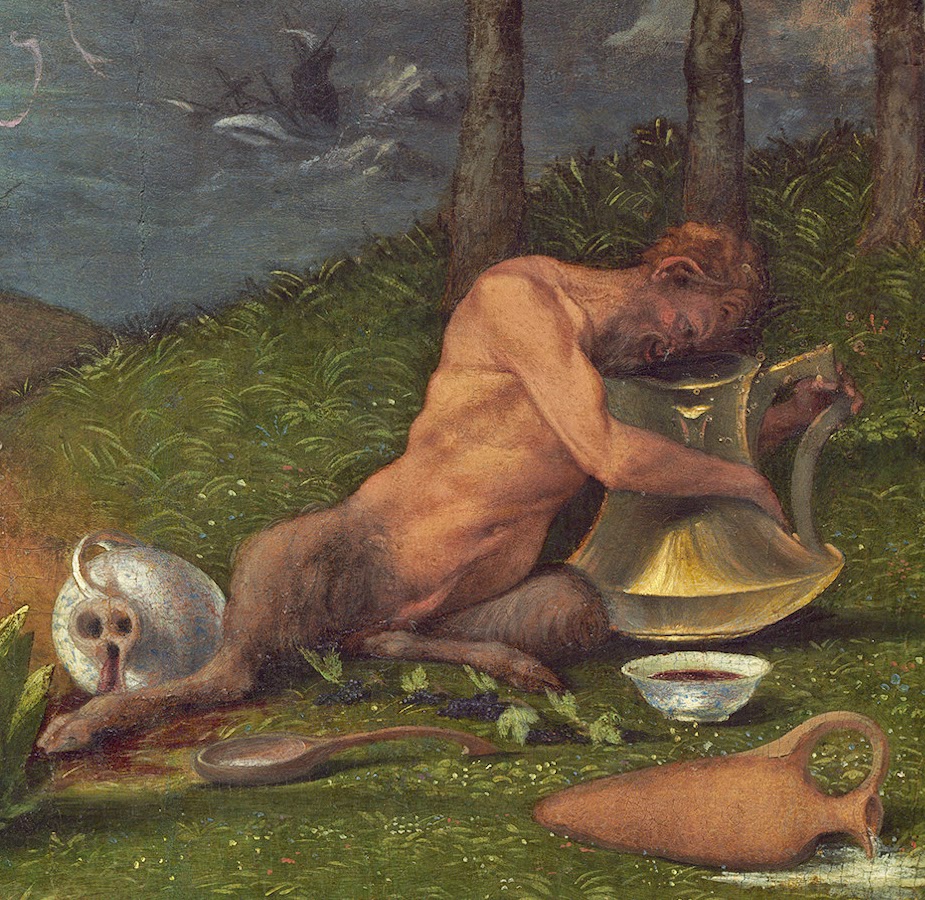 If you live a life of virtue, you will crawl around in a barren wasteland of dirt and rocks naked, striving to do something useful with your meagre means. Ultimately a colony of bats will seize you and dump you into what appears to be an erupting volcano. 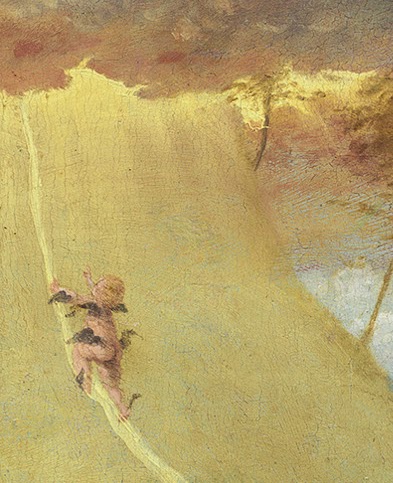 The Allegory of Chastity is even simpler.

On close inspection, I assume he’s supposed to be scattering flowers over her pure form.  But my first impression at a glance was: Living a chaste life is like getting pissed on by a smug cherub. 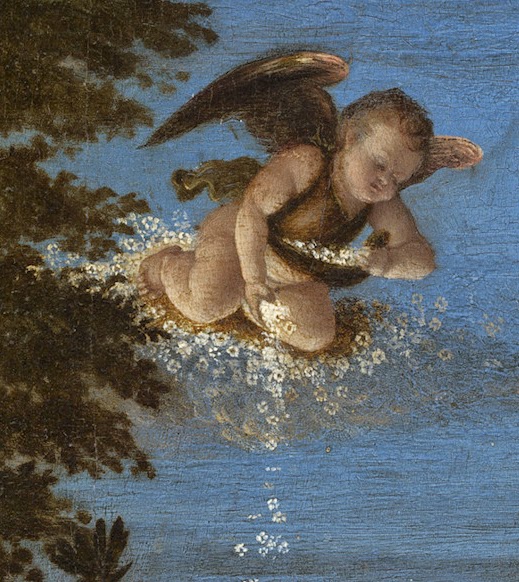 Not sure this is supposed to be the take-away message.  Moral lessons were never my strong point.

All images are from the National Gallery of Art.
Posted by Sarcastic Ninja at 20:02 5 comments: