Imagine you’re a 16th century painter.  People come to you and commission work.  But sometimes, the subject just doesn’t inspire you.  You get a little bored.  So maybe you decide to entertain yourself a bit.

Take this guy, for instance.

At a glance, it’s just a portrait of a slightly sad, slightly bored-looking guy with a penchant for poofy sleeves and draping as many dead animal skins over himself as possible.

But what’s that going on outside? 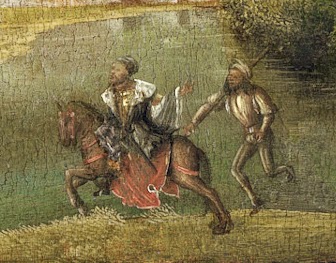 It that a robbery in progress?  Has there been a ride-by lancing?  Is this 16th-century foreplay?  Why doesn’t the guy in the foreground notice what is going on right outside his window?  Is his moping that intense?

Ok, so painting random dudes is something you do to make rent.  Painting the Madonna and Child must be a passionate act of devotion, right?

Just look at that Disney-princess-like Mary!  And such an adoring baby Jesus, who may or may not be about to strangle young St. John the Baptist!  Heck, even St. John looks happier than I thought he was ever allowed to be depicted. 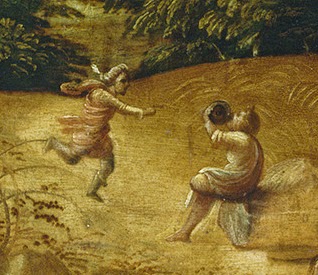 …and then there’s the alcoholic intervention going on behind them.  George there apparently snuck off to indulge in a private flagon of wine, but his best friend Steve rushes to the scene to ask him to think of the kids, and remind him that he promised Melissa this wouldn’t happen again.

Right.  Everyone paints the Madonna and Child.  It’s like a rite of passage.  Let’s take on a less well-trodden Bible passage.  Something with all the drama of relying purely on faith to survive!

God sends a message to Elijah to go hide in a valley, noting that He ordered some ravens to feed him.  Sure enough, every day a raven brings him an English muffin well-seasoned with raven spit.

Miracle or no, Elijah seems to relish the idea of eating the same thing every day as much as anyone.

But the thing is, while Elijah is staring forlornly at his next meal via Raven-o-gram, there is literally a chariot soaring through the sky behind him. 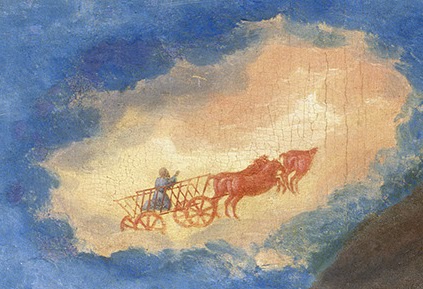 Everyone else around has stopped what they are doing to point and say, “OH MY GOD!!”

The moral of the story: no matter how creative or artistic your job, doodling in the margins is always more entertaining than what you’re supposed to be doing.

All images are from the National Gallery of Art.
Posted by Sarcastic Ninja at 10:28 6 comments:

Grab Bag: The Fab, The Drab, and The Nightmarish Fruit Demon


Dear readers, after a glut of pious and/or fleshy works, I thought I would challenge myself to snark about some paintings which A) are not obviously religious and B) feature no naked people.  I realize this will not be a popular post, since the top two search terms of all time that bring people here are “naked men” and “guardian angels,” but sometimes one must stretch beyond one’s comfort zone for art.

At first I thought I would write something about this:

I love this guy.  He is so fabulous.  Few men I know can rock a giant pearl drop earring like him.  But then he gave me this look: 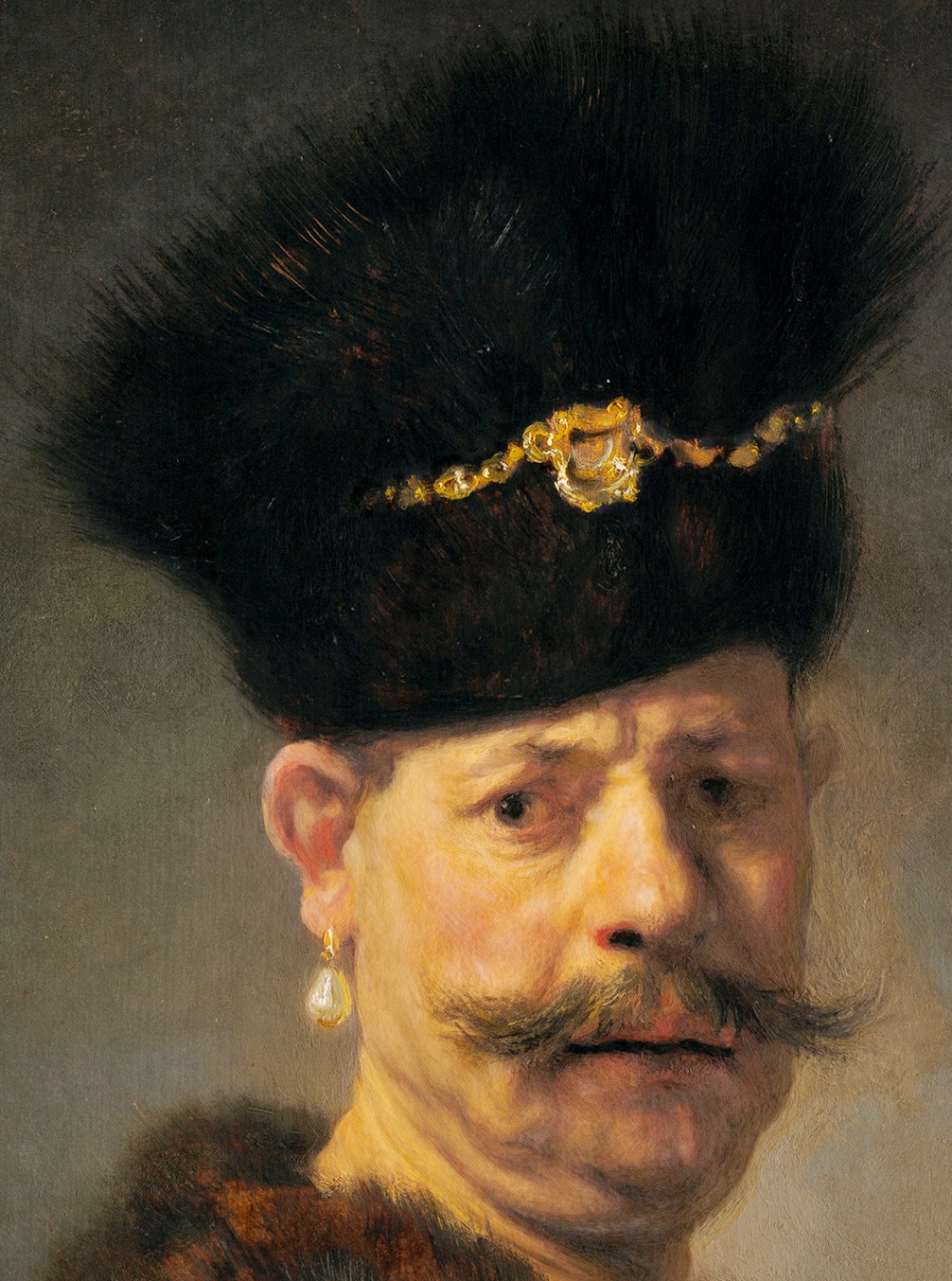 As if to say, “Jestem smutny, że kpić moją wspaniałą kulturę.”  Which is what Google Translate tells me is Polish for “I am sad you mock my glorious culture.”  Although for all I know, it could be anything.  For example, "Just smut, the pic of my Spanish cult style."

So then I thought I would try this one: 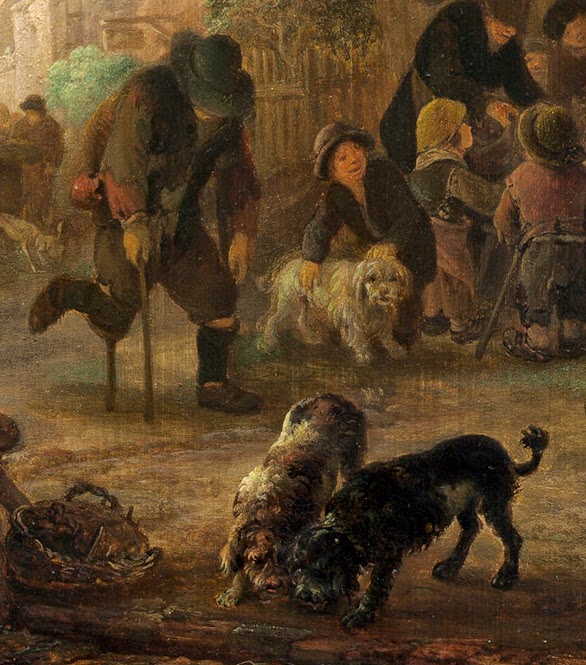 It was a bit dry otherwise though.  So, ultimately I decided to present you with this:

The person I was with at the gallery when I first saw this was like “Why are you recoiling at a still life of fruit and sticks?” and I went “DON’T YOU SEE IT IS A TERRIFYING WARTY TREE MAN” and she went “AHHHHH” and then neither of us could eat cherries ever again because they might have been plucked from an old toothless tree man’s earwax.

Although I give him kudos for the rockin’ grass-and-floral islandwear.

All images are from the National Gallery of Art.
Posted by Sarcastic Ninja at 18:56 10 comments:


So I was going to do a Medici Cycle post, the series which has lain dormant for over a year now like a hibernating grizzly bear, waiting for the opportunity to emerge from the cavernous depths and claw your eyes out in a rage of colorful brushstrokes and curvaceous women.  But when I was searching for a good copy of the next painting in the story, I got distracted by this other work by Rubens.

The Feast of Venus – everyone frolicks about, worshipping and adoring a statue!

There is the obligatory sexytime going on around the fringes…

…and some couples making out that I really wish weren’t.

Not all of the revelers look happy to be there, however.

I’m not sure whether she’s just tripped and is in the process of falling, or if she is about to plunge her hand into that tambourine and rip out its heart.

Most of the baby-cupids are pretty involved in the naked frolicking, but some of them have better things to do.

I’m not sure whether he’s rinsing off in the waterfall or vomiting.  Either way, it’s been a wild party.

While many of the cupids have interesting expressions on close inspection, this one has to be my favorite.

If I were at this gathering I would not stand under the floral display he's holding.  And would have someone else taste everything before me.  And would bring a taser.

I think these remarkably clothed women missed the memo about what kind of a party this was going to be.

They try to tempt the wee ones to purity and wholesomeness with their offer of 17th-century Barbies, but the kids are all, “Screw that!  We’re busy with naked dancing.”

Finally, the most disturbing detail of this picture is tucked away at the bottom, amidst the flowers and fruit strewn about everyone’s feet.

Why is an old man’s head, empty eye sockets staring soullessly, lying around at a rollicking celebration of Venus??

Oh wait, I think I have the answer to that. 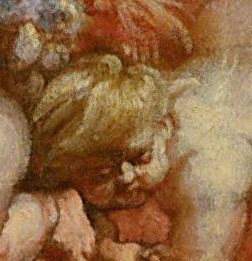