Dear readers, Thanksgiving has come once again.  That glorious day of the year when the whole family comes together to scarf down in half an hour a feast that took 15 hours to prepare, and then fall into a food coma in front of the TV.  Thankful!

So the first thing that catches the eye is this classy guy. 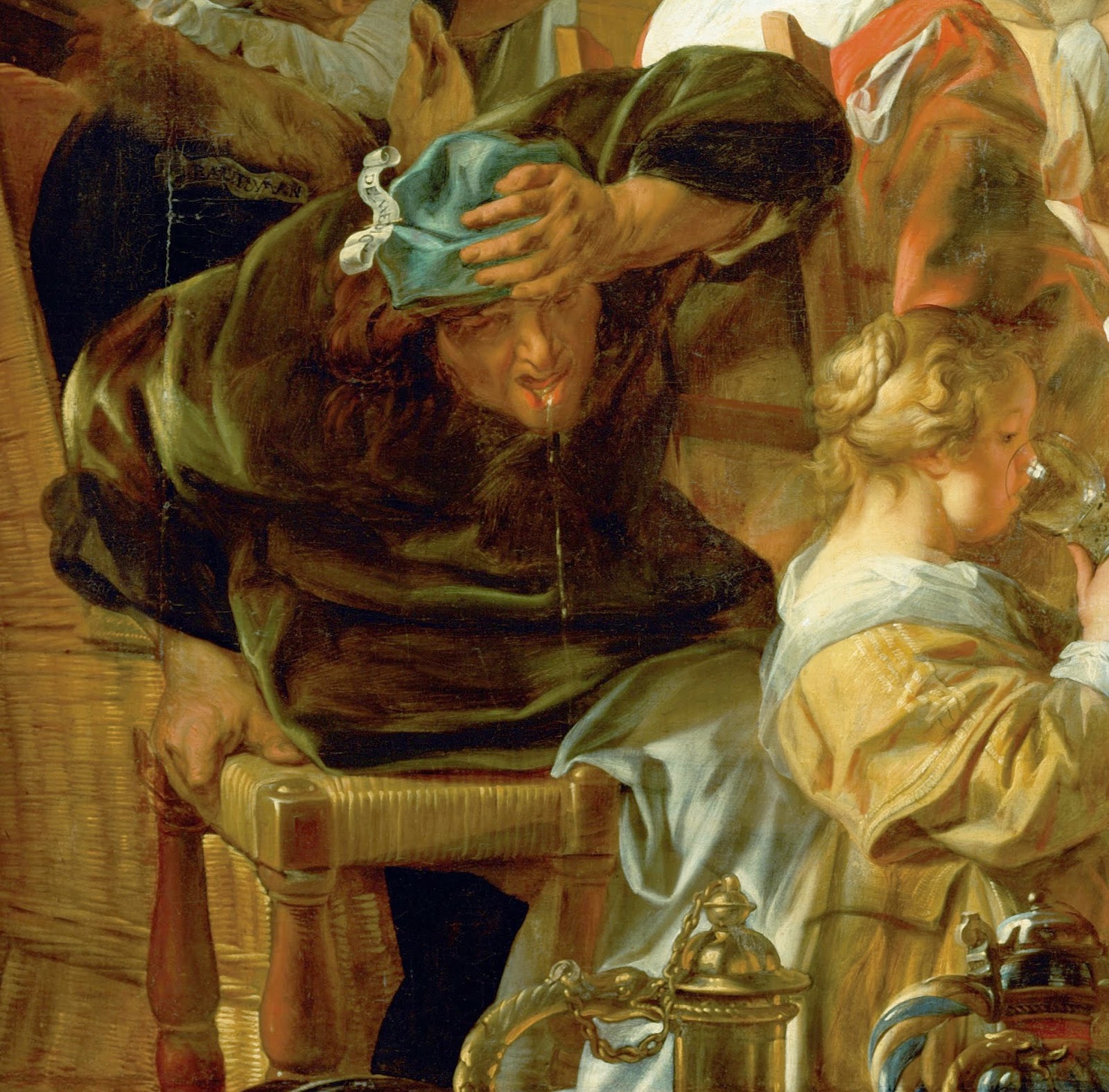 He cares enough about his own garments to keep his cap from falling into his own pool of bodily fluids, but no one seems to notice or really care that he is vomiting on that little girl’s dress.  The woman next him is looking over in a sort of “Ha ha, oh Jan, you need to learn to hold your liquor” sort of way, but that’s about the only reaction.

Casting the eye up the way, we spot this amorous couple. 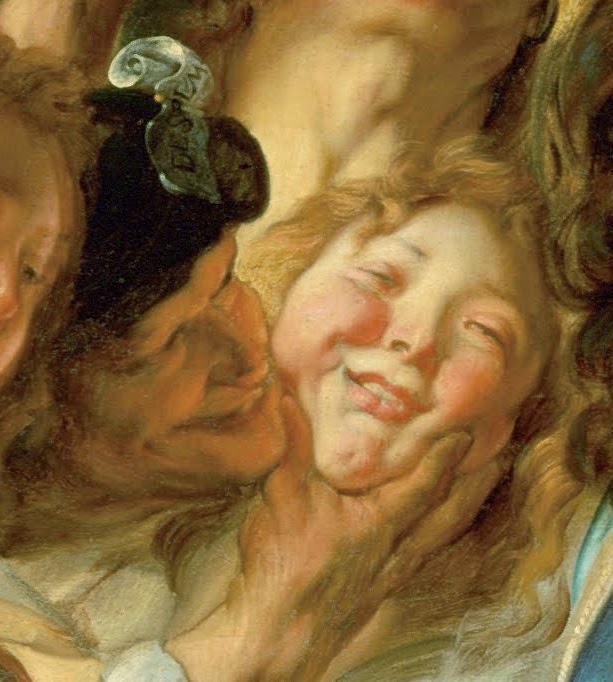 My first thought was “Oh my God, he is going to crush her jaw with his bare hand!”  But she seems to be enjoying herself, so maybe Creepy Men With Face Mutilation Fetishes are her thing.

Behind them is this gentleman who seems unfamiliar with how to smoke a pipe. 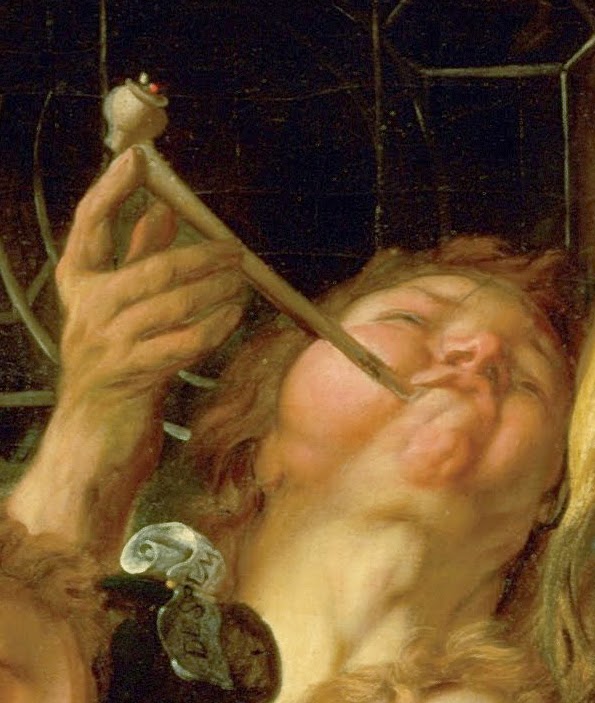 To be fair, I have never smoked a pipe either, so perhaps I am unfamiliar with the mechanics.  However, I feel like people I have seen with pipes usually do not have their heads thrown back, necks bulging, and chins puckered when they partake.  Sherlock Holmes would be a much less picturesque character to illustrate with his cheeks puffed like a starving squirrel and eyes rolled back into the next postal code.

Other fun partygoers include Doghat McAngryface…. 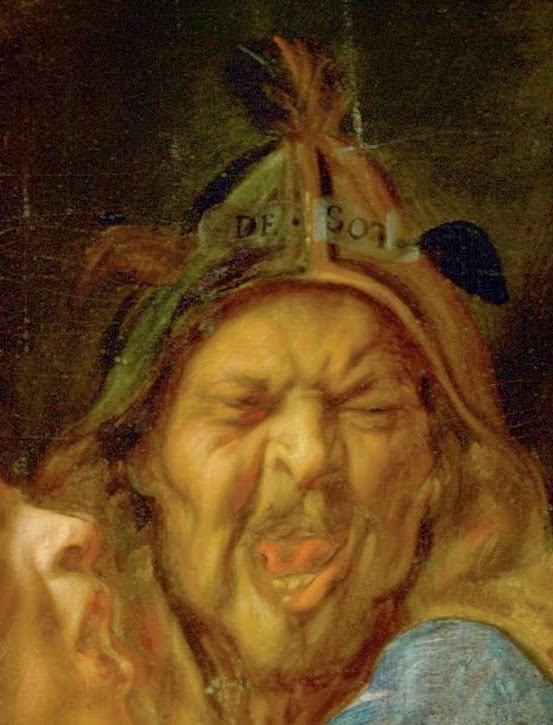 …And this man, who from a distance, I thought might be foaming at the mouth. 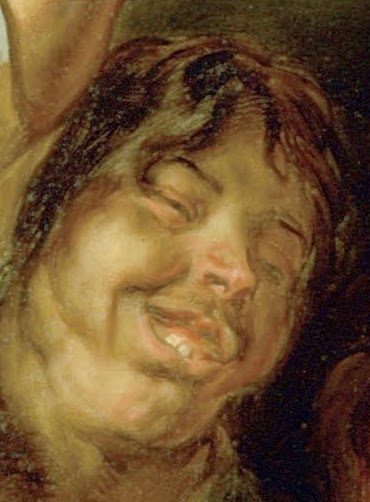 It turns out he’s just about to happily spit out all of his teeth.  There are a lot of sloppily raised arms there, so it would not surprise me if he just got landed with a powerful uppercut with a pint glass. 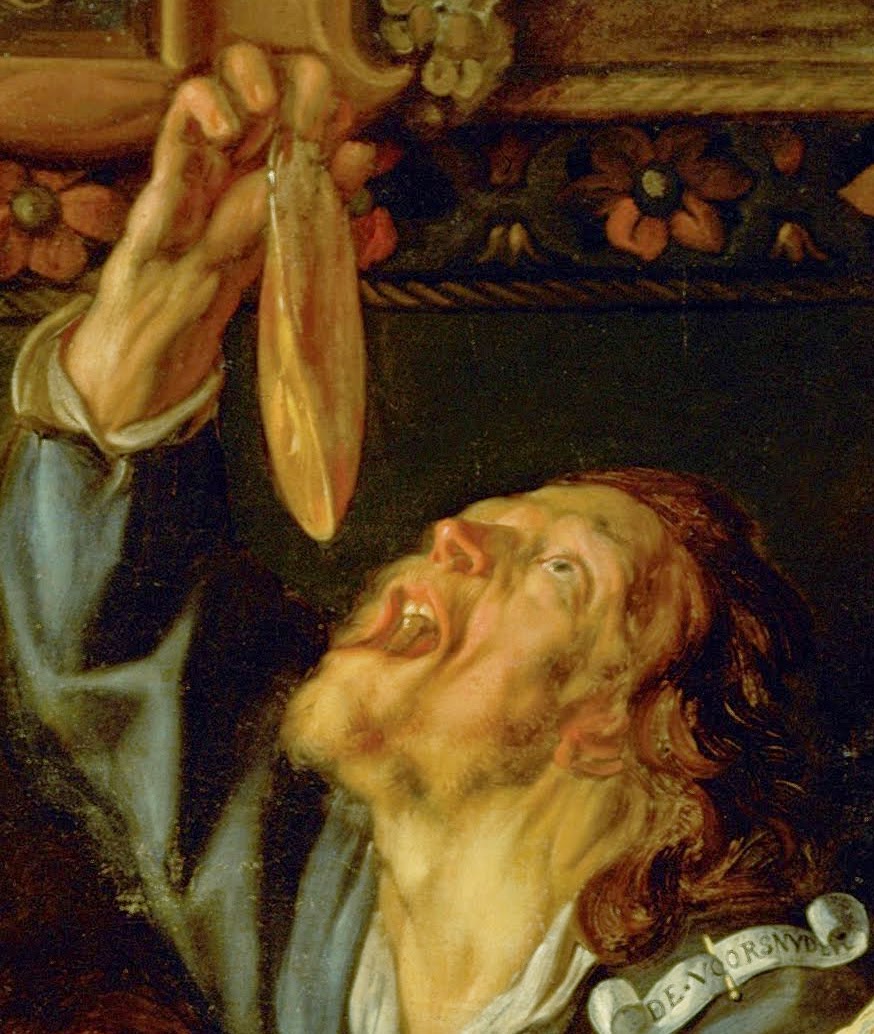 Speaking of raised things, I’m sure this is meant to be a cut of meat, but it sure looks like he’s about to deep throat a spent balloon or other soggy elongated rubber tubular object.  But whatever it is, he is going to swallow it with gusto.

Drawing attention back to the other side of the painting again, this mirror on the wall caught my eye.  It’s got the back of the head of the woman looking over at the vomiting man in amusement, and the bonnet of the little old lady behind her.  But also featured is…. 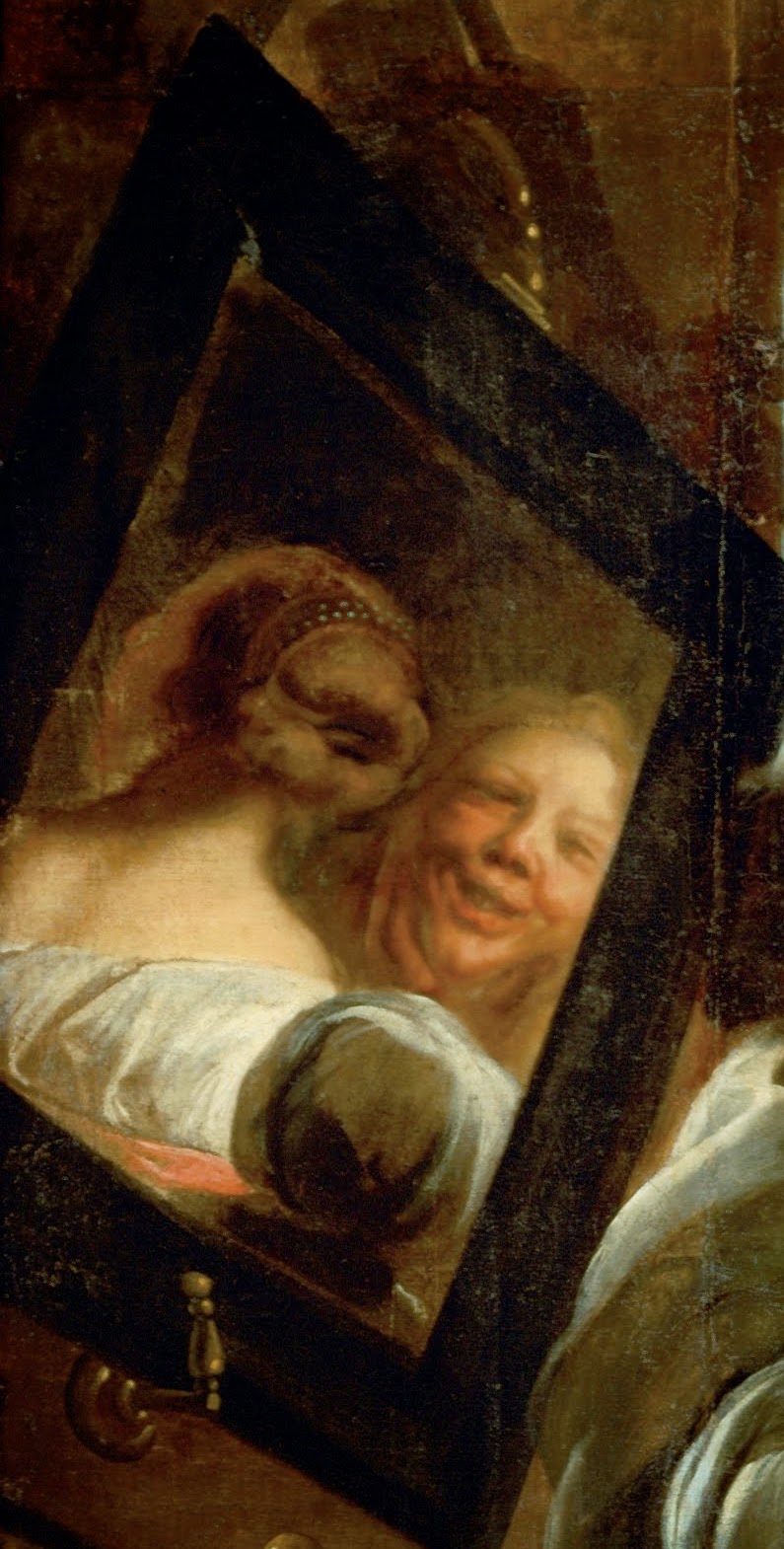 THAT TERRIFYING FACE BEING STRANGLED.  It looks like an even creepier version of that woman having her jaw crushed above, except that person is facing the same direction as the two women who have the backs of their heads reflected here.  I guess the artist just really liked painting strangulation/face crushing, so physics be darned, he was painting it again.  However, maybe it’s just me, but there is something about a ghostly disembodied head with a grotesque soulless smile over a murderous hand in the mirror without an obvious source that makes it extra terrifying.

In conclusion, 17th century folks seemed to know how to have a rollicking feast.  I think the figure I identify with most in this painting, though, is this guy.
Happy Thanksgiving!
Posted by Sarcastic Ninja at 00:00 11 comments:

And Now For Something Completely Different


This week I am departing from the official theme of this blog, because I was inspired to do something other than stare at the intricate details of medieval paintings of religious/tortured/naked people.  So if you are one of those people who found this page by Googling “religious tortured naked people,” you can hit the back button right now.

When I was at the airport in Spain a few weeks ago, I poked around the Duty Free shop for a bit, looking for last-minute souvenirs.  It was there I encountered Bad Toro goods.
I instantly felt a connection with this adorable bull with attitude, but I was also filled with questions.  What are his motivations?  Why is he angry?  Is he really bad, or is he just drawn that way?

When I got home I searched to see more of his story, but it turns out he is basically just the mascot for an extreme sports reporting site.  This is pretty much his whole background:

“BADTORO is a noble but challenging looking pet that is characterized above all by his courage in facing challenges that may seem impossible to many. It represents not to hide from anything or anyone acting always with courage, respect and sincerity.”

Now, I have to take issue with this story, because there is no way Bad Toro is a pet.  He is far too determined and free-spirited, taking no bull (so to speak) from anyone.  I decided to plunge deeper to learn more of his personal passions and hobbies. 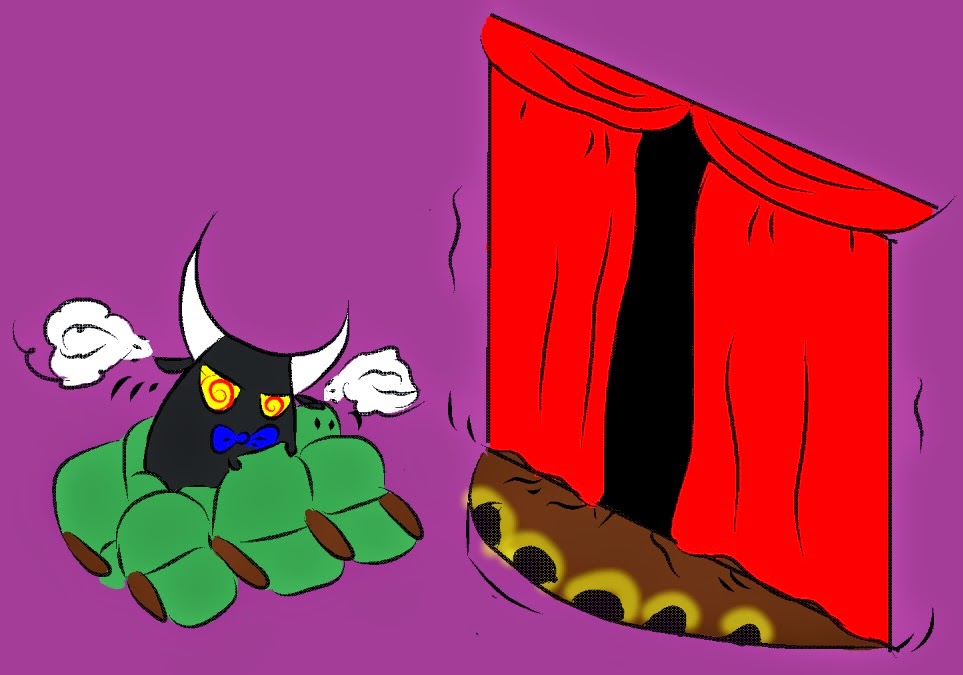 It seems Bad Toro loves culture.  Sometimes he likes to get dressed up and go to the theatre.  Unfortunately, the beginning and end of a production can be quite the test of his self-control, due to some traumatic incidents in his past. 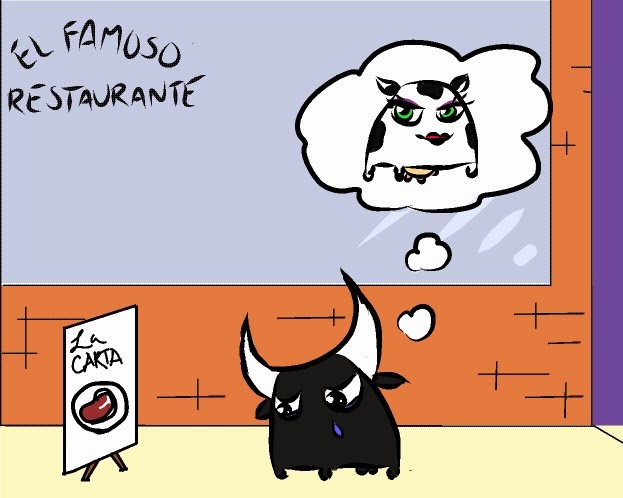 The key to his “bad” attitude lies in the tragic loss of his one true love.  Now, he will go to any lengths to stop the marauding race of murderous barbarians who would enslave, torture, and eat his kin. 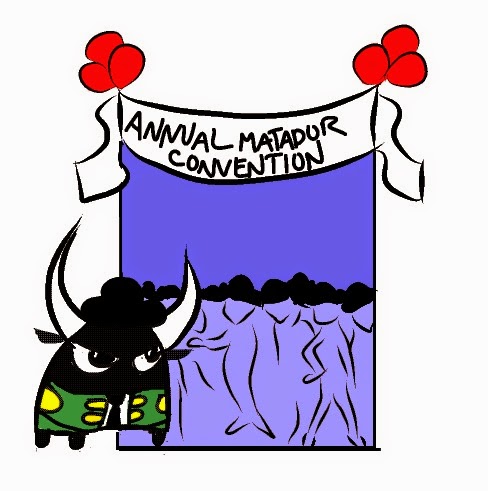 He’s a bit of an International Toro of Mystery – in an effort to save his brothers, he has been known to disguise himself and infiltrate gatherings of matadors to learn their latest strategies.

Bad Toro does show courage in facing challenges that would seem impossible to many.  He knows better than most that the stakes are high.  He is indeed a noble creature, working for the freedom of bovinekind in memory of his sweet Bessita.

Thus concludes the Tale of Bad Toro.  Our regularly scheduled program of creepy old paintings should be back next week.

P.S.: I have a newfound respect for people who regularly come up with content and illustrate their own blogs.  This is way harder than making snarky comments about other people's work.


This week I learned that automatonophobia is the fear of inanimate objects that represent humans.  Thanks, Google!

In part three of the Europe travel notes, we look again at Oviedo Cathedral, and more specifically at a few of the statues around the place.  First, St. Anthony. 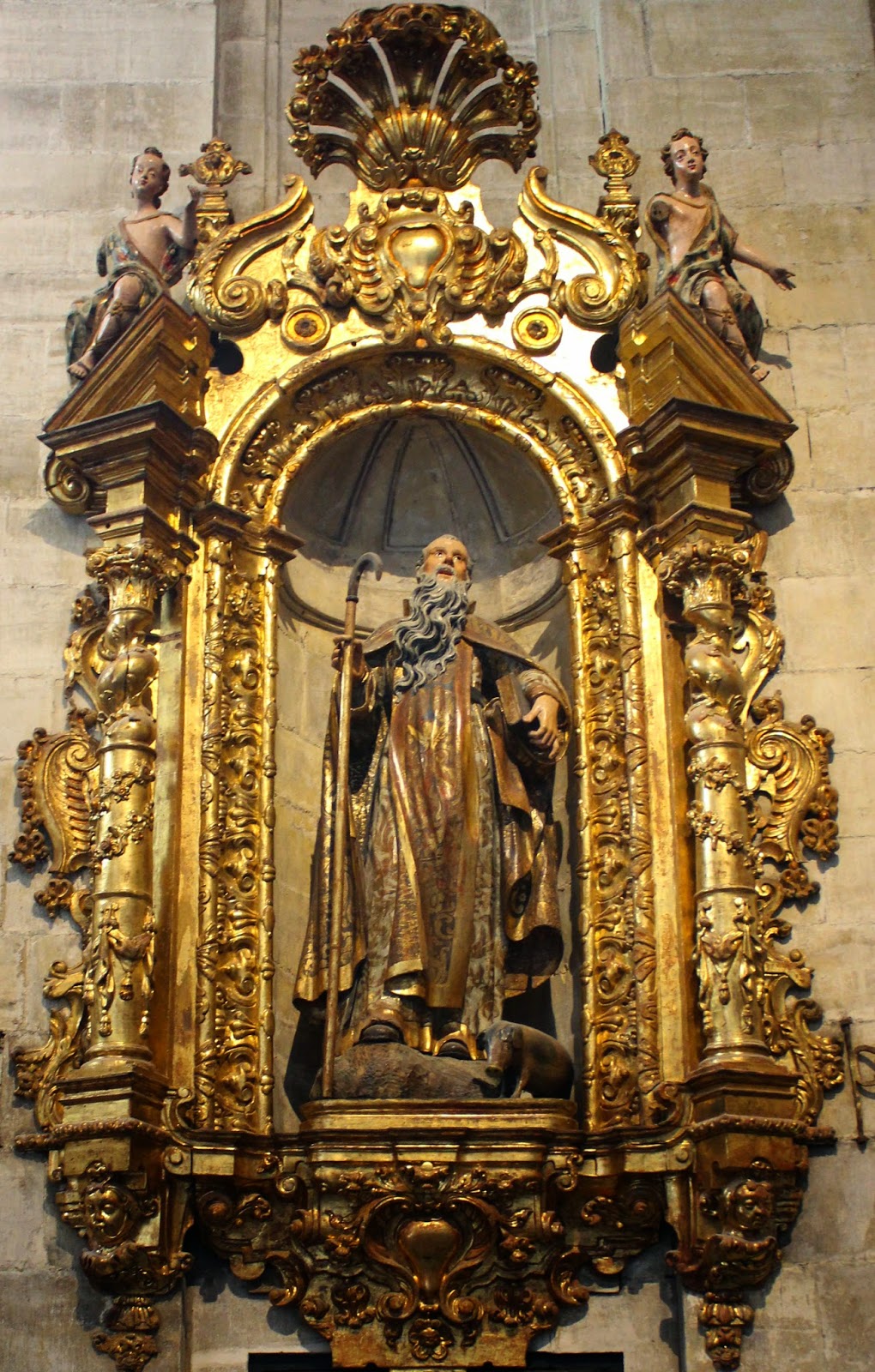 
We’ve looked at St. Anthony before, and the main reason he’s here is because I still love the adorable pig by his side. 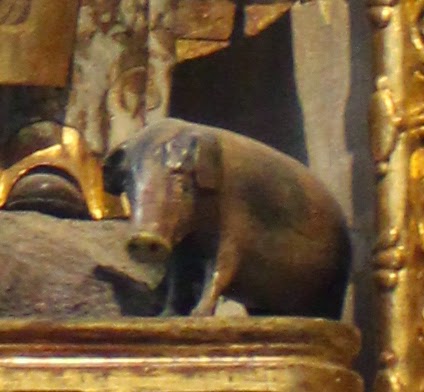 Adorable but sad, as if he knows he’s just a thought away from being turned into bacon for his master.

I guess saintly animal companions were pretty popular.  This guy has a stoned lion hanging out with him, which doubles as a book stand. 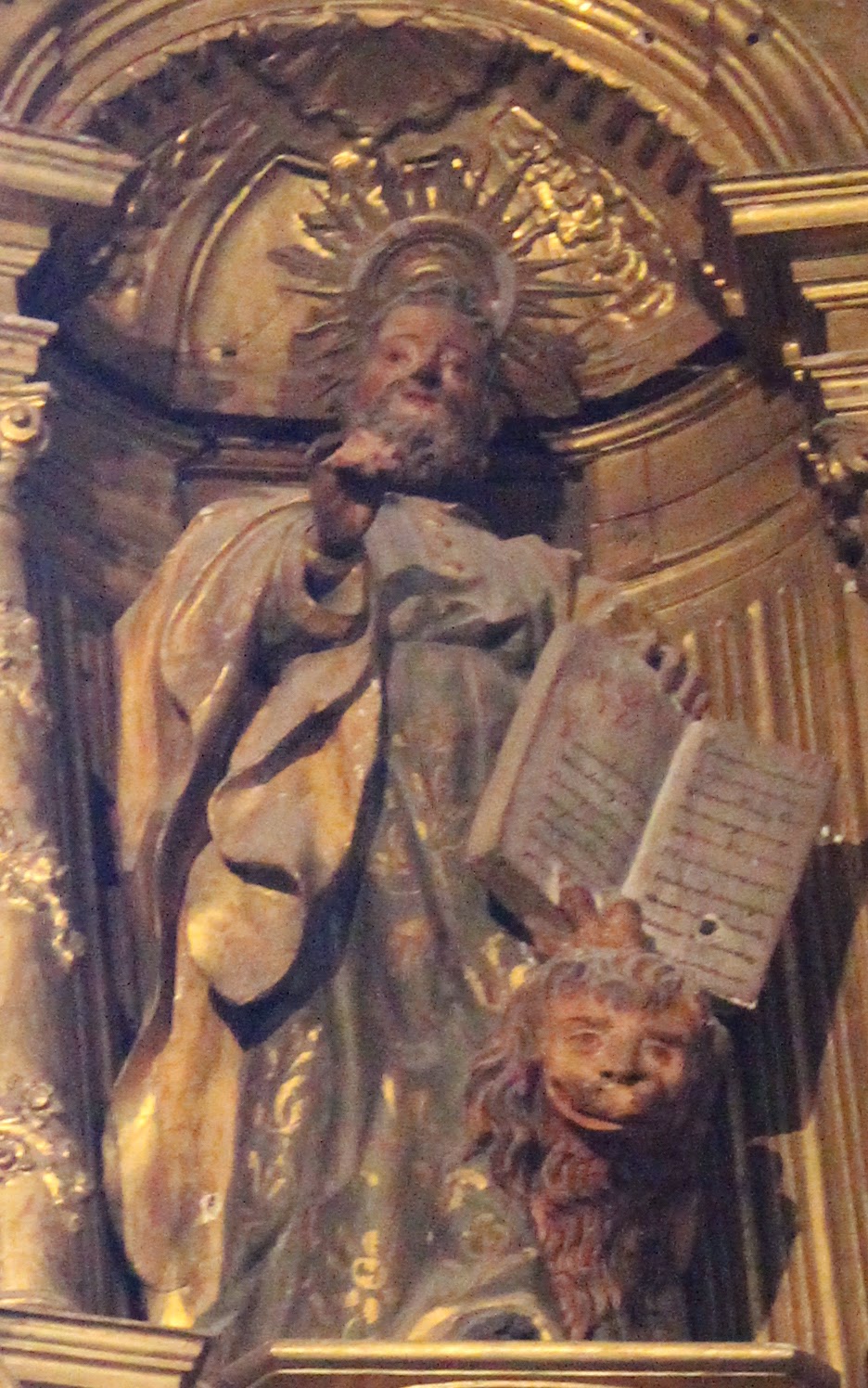 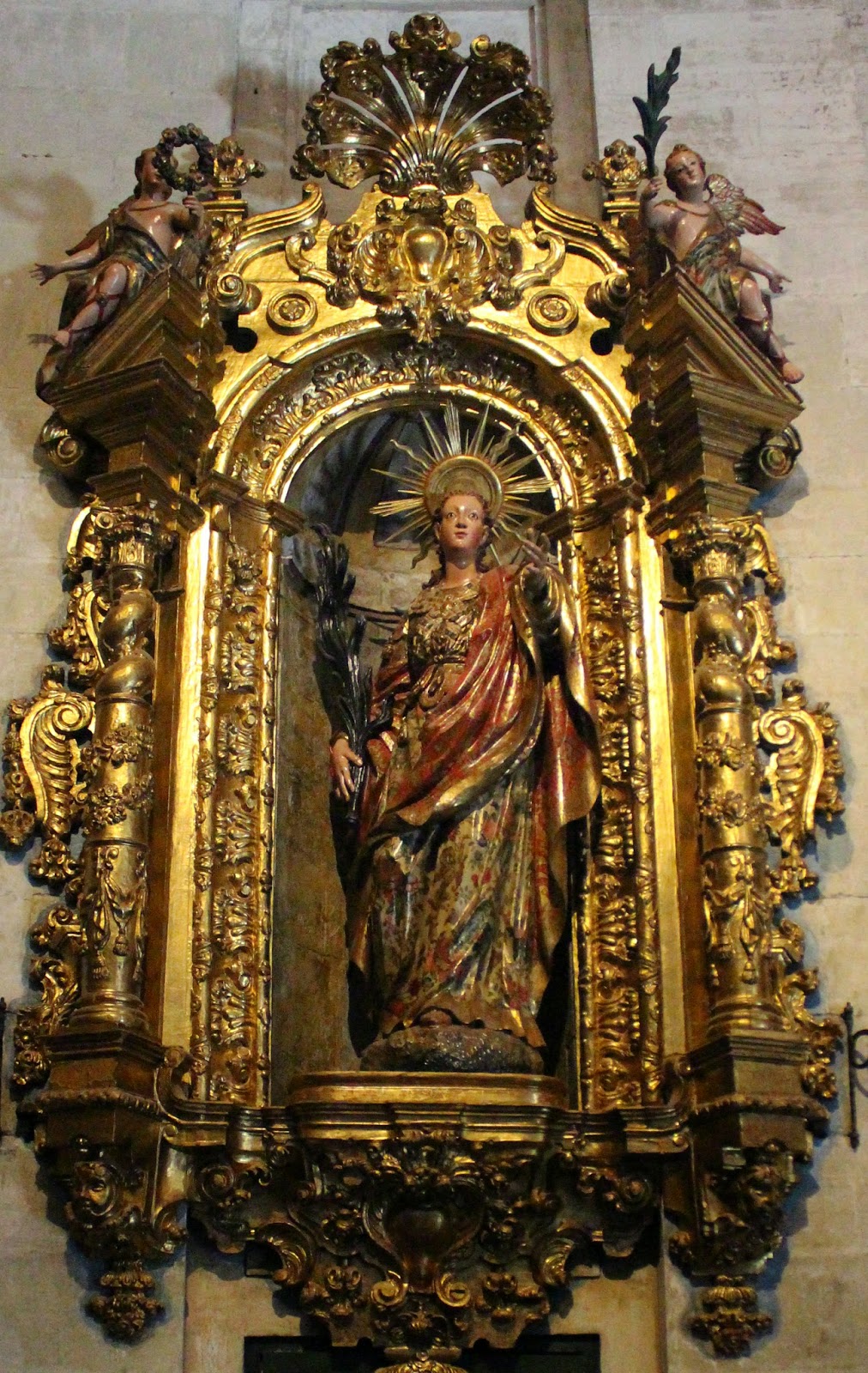 The combination of her wild lightning bolts on a plate, combined with her creepy, slightly reptilian eyes, reminds me of one of the weeping angels from Doctor Who crossed with a rogue Pokémon. 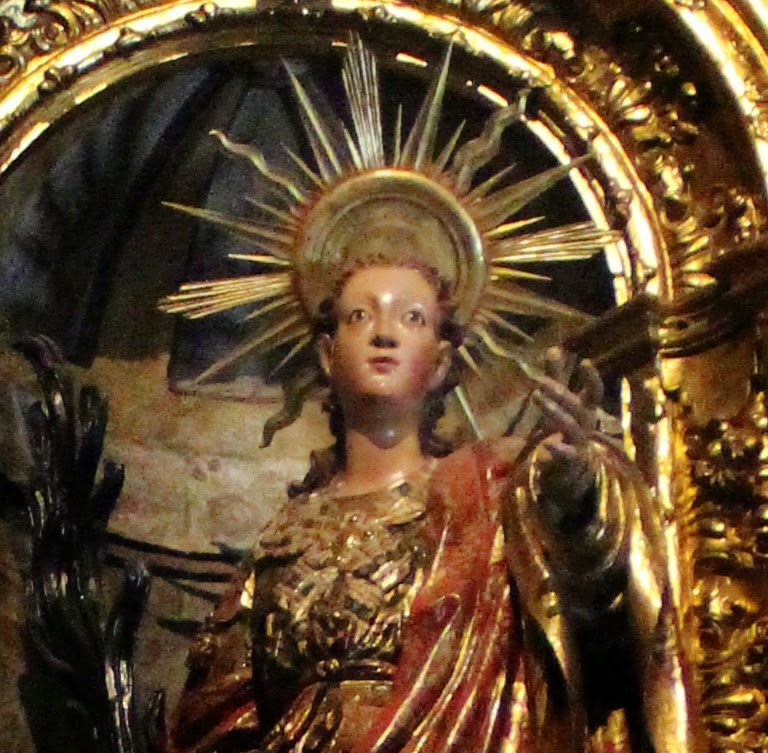 Speaking of the Timelord, here is the Eleventh Doctor’s patron saint.

This is apparently the corner for people who crossed St. Leocadia, with shock and seizures being the result. 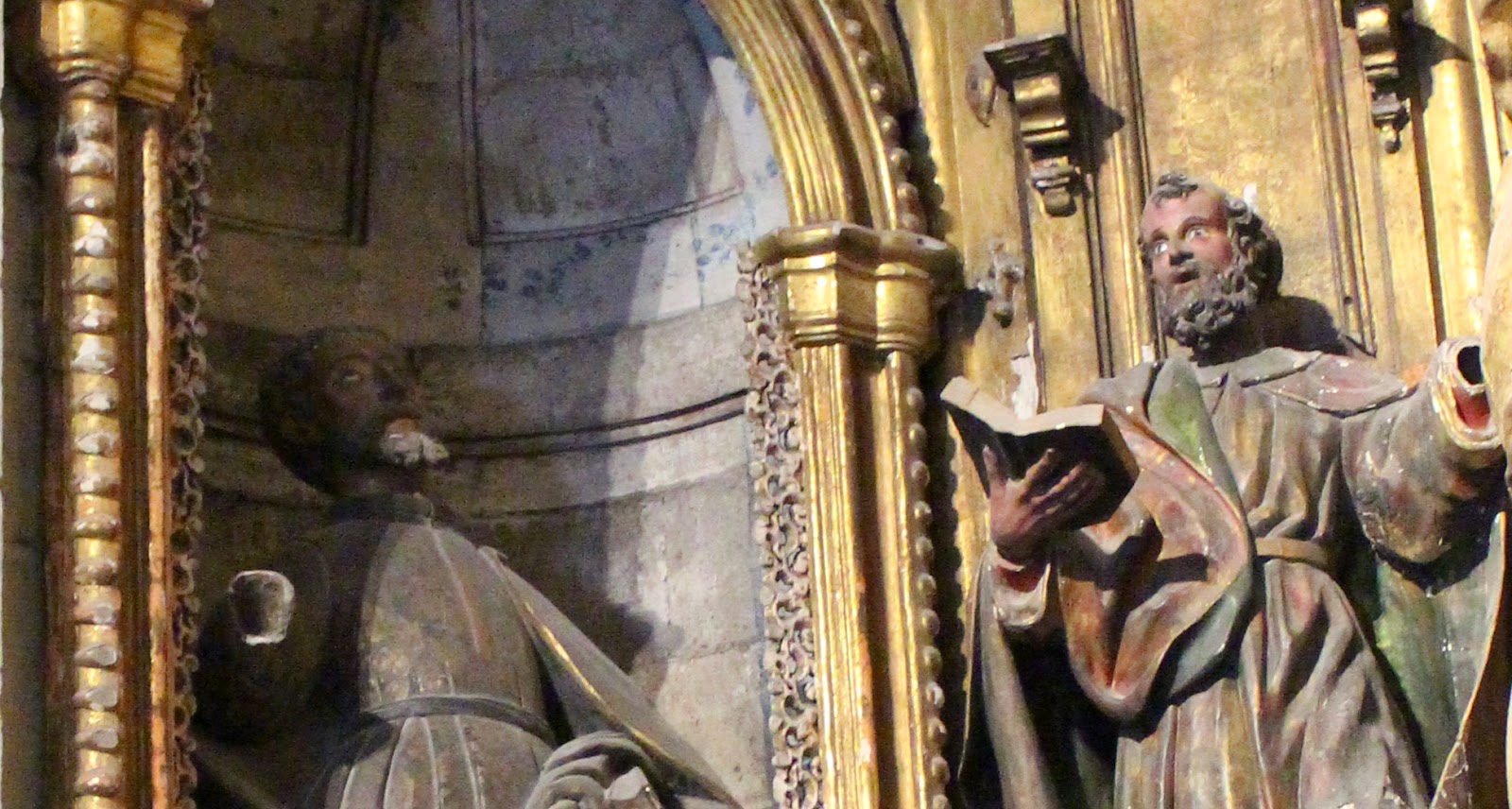 I am not sure who this guy is, but the demon he is walking over looks more annoyed than conquered. 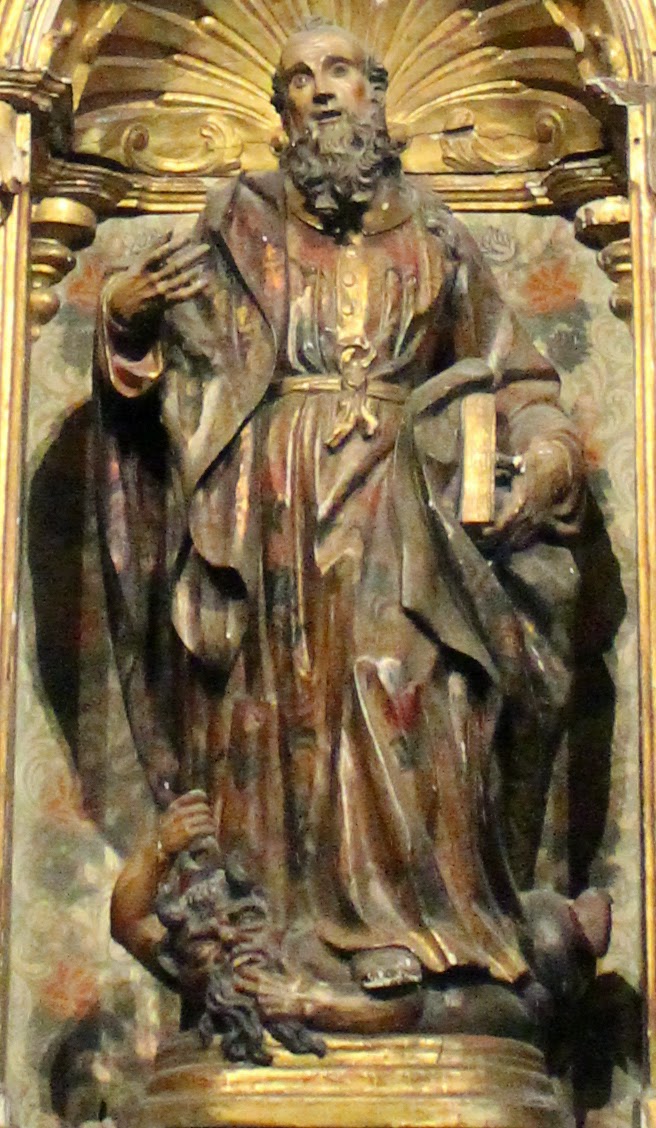 Of course St. Peter gets a central statue spot. 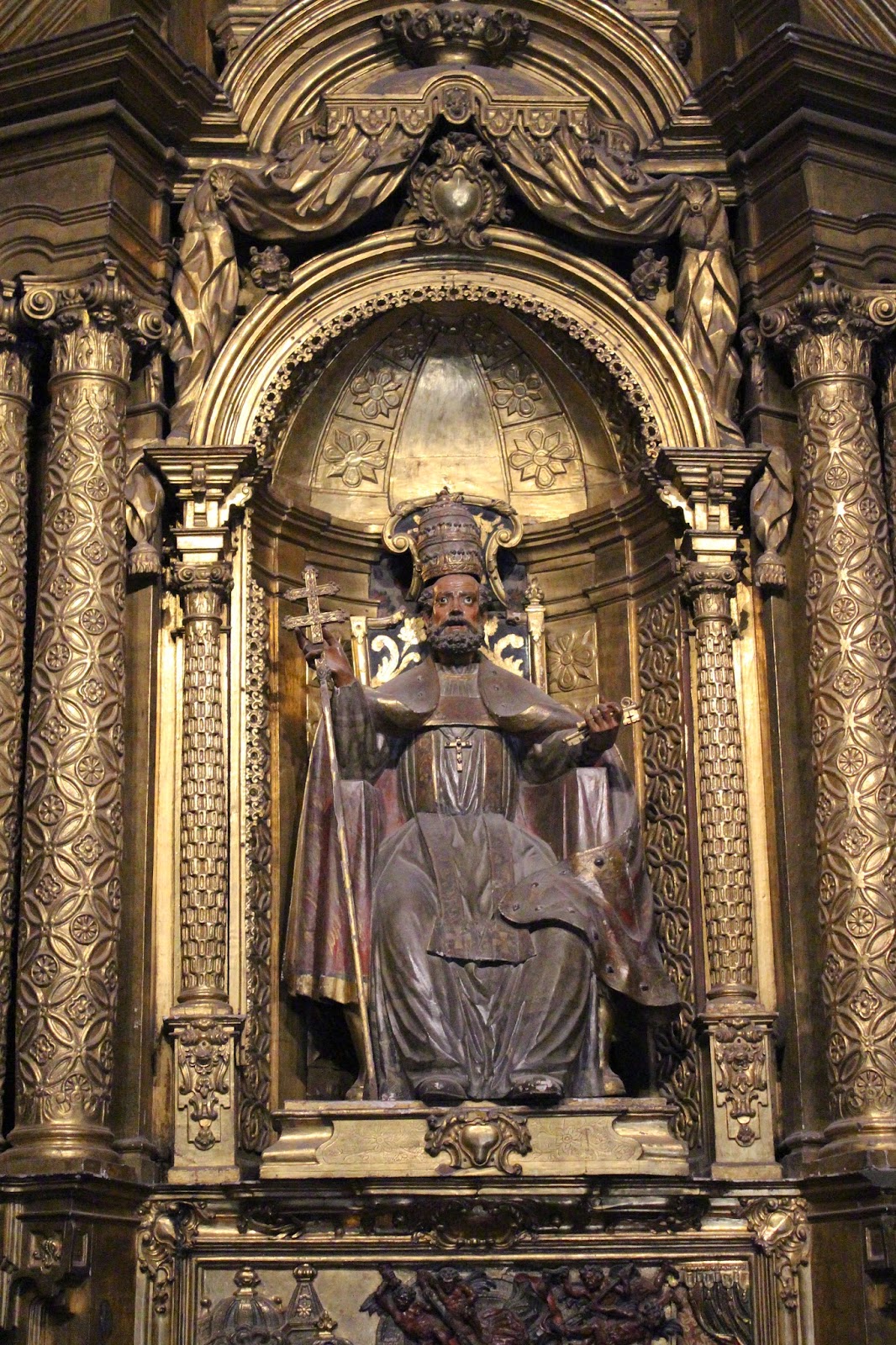 The jaunty angle of his beehive hat, the gaping mouth, the crazed eyes looking in slightly different directions...he’s holding out the keys of the Kingdom of Heaven as if to say, “PLEASE TAKE THESE KEYS BECAUSE I DON’T REMEMBER WHERE I LIVE.” 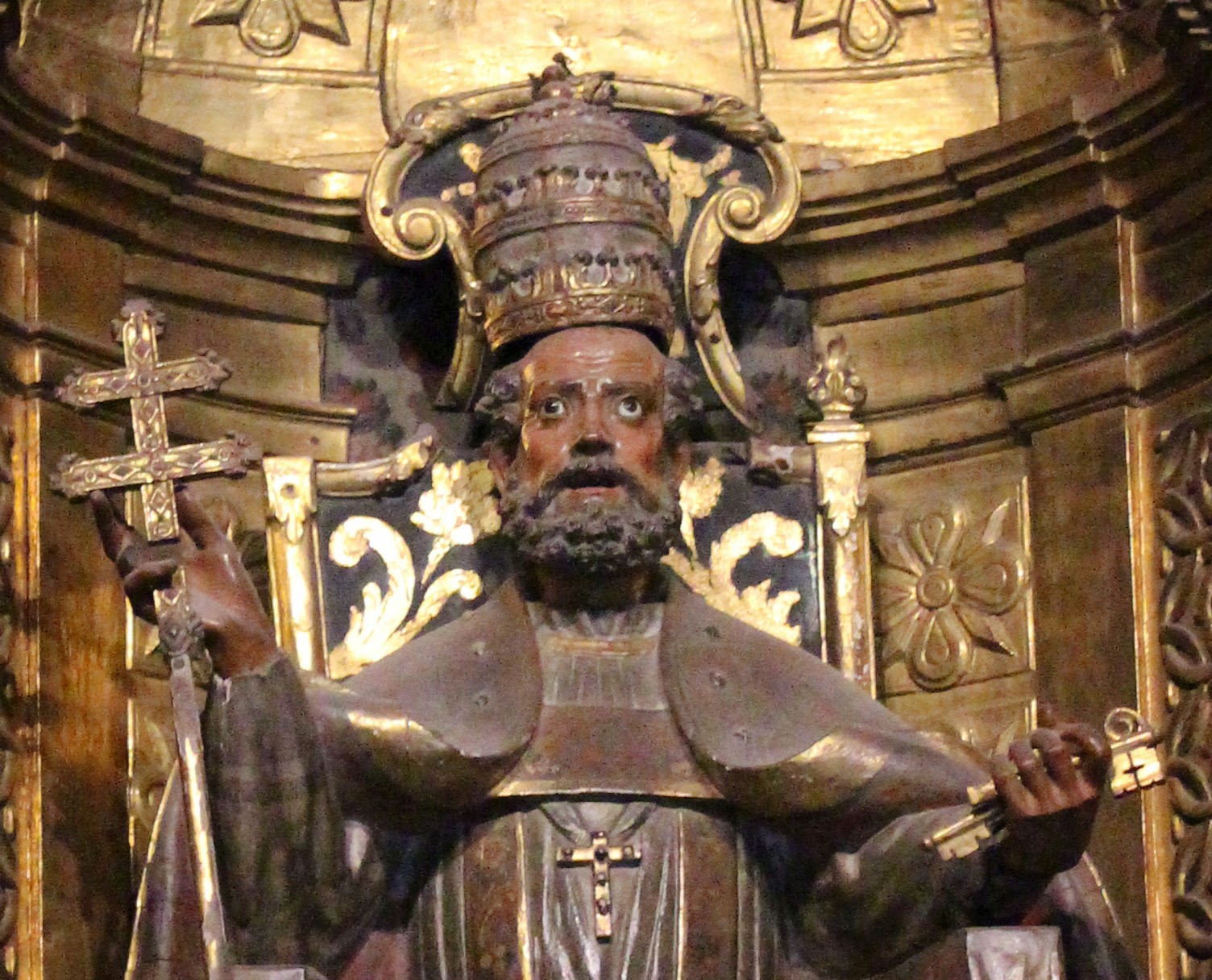 Finally for this installment, I present this lovely altar featuring the Holy Family. 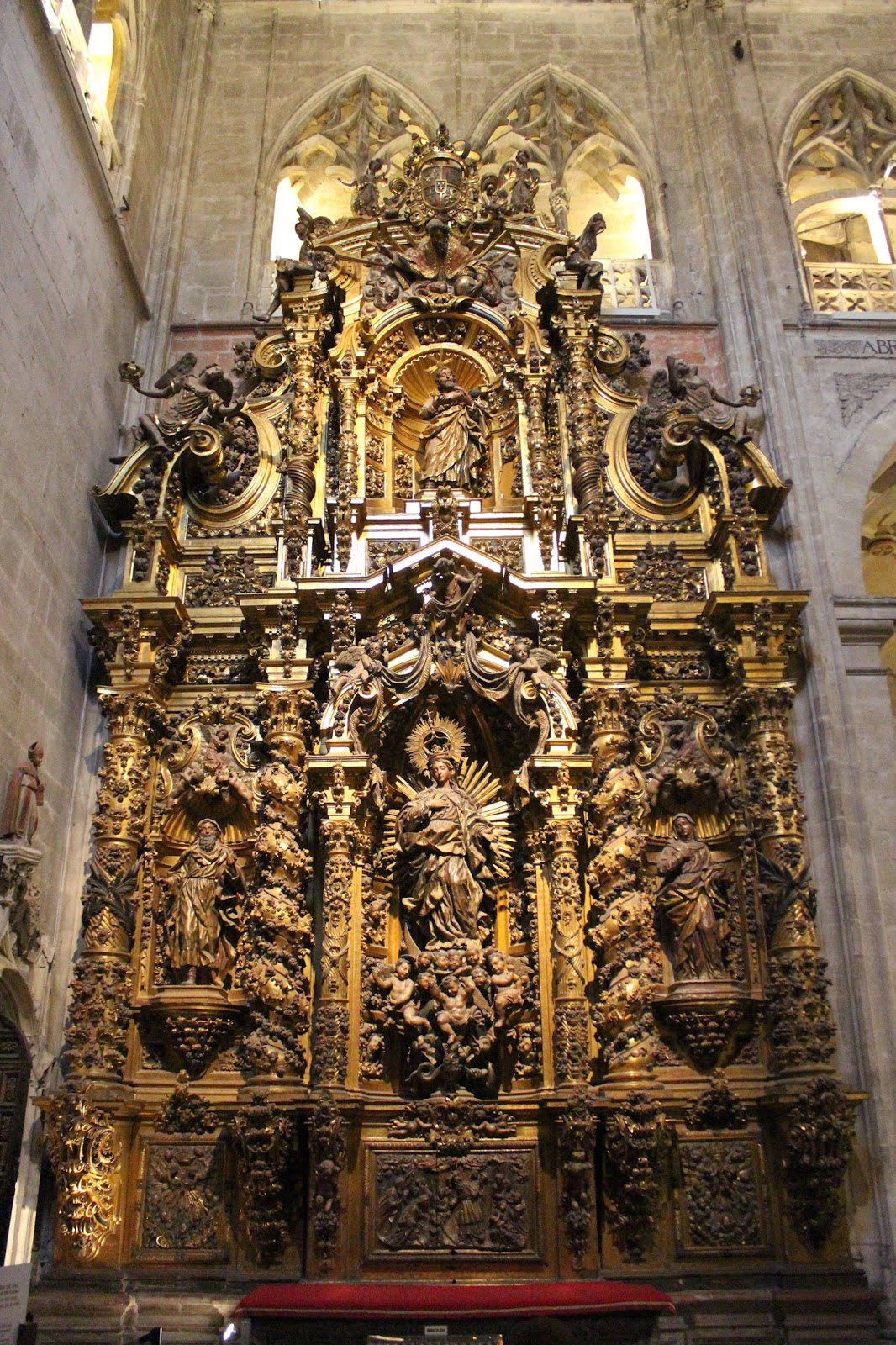 There are a lot of statues of Mary holding Baby Jesus, maybe with a dove shooting laser beams over their heads to represent her Baby Daddy.  I like this one, however, because Mary is on her own being glorified on top of a pile of children, while Joseph has been left with babysitting duties overhead. 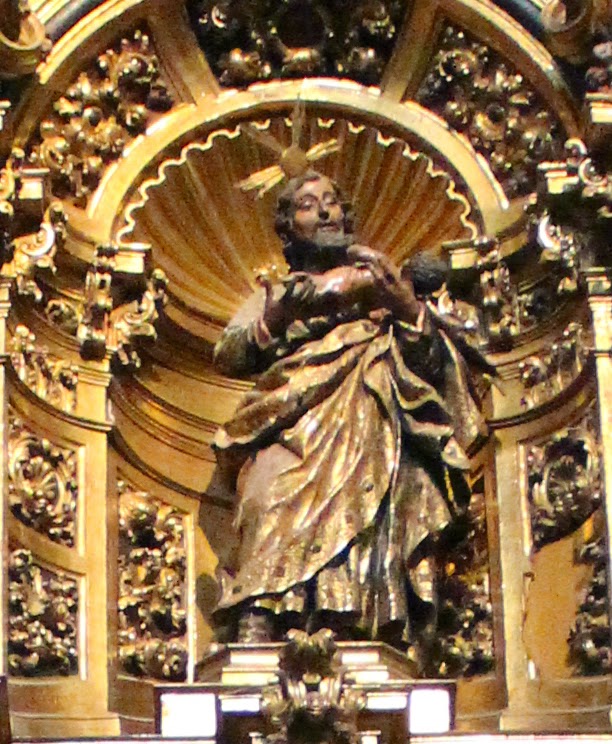 He is holding that baby like he is not quite sure which way is up, and he definitely does not want to change the Holy Diaper.
Posted by Sarcastic Ninja at 10:38 8 comments: