Santa Claus Is Coming (To Your Nightmares)


For children around the US, the countdown is on until a large bearded man breaks into their homes late at night, and miraculously their parents don’t try to stand their ground.   This man steals baked goods and cow juice in exchange for toys that look suspiciously like the sale offerings at Target.  Whether they are based at the North Pole or his subsidiary plants in China, his elves have been slaving away, while he himself only stirs from his home office once a year (although he’s been spotted at shopping malls inviting every child he sees to sit on his lap and tell him their deepest, darkest desires).  His name and background story change slightly in other countries, almost as if he’s got something to hide.  But who is this man, just a keyboard slip away from Satan?

Someone I don’t want anywhere near my purely hypothetical offspring, that’s who.

Blood-red lips and rouged cheeks peek out from a curtain of dirty white, eyes slightly uneven as he clutches a beaded handbag possibly stolen from the Missus’ closet.  “Have this lovely dolly I made just for you, Sally!” he says, parroting the words whispered into his ear by the tiny goblin on his shoulder.


This version looks more like a garden gnome that is cheerfully kidnapping your child.  “Ha ha ha, let’s go, Billy!  I will take you to a place full of candy!  Of course your parents won’t mind!”

I am not sure whether this is Santa or the offspring of Jabba the Hutt and a grizzly bear.
Wes Craven's next smash hit.

Pretty sure this was the model for all caricatures of 19th century robber barons.
The Grinch, age 80.

Remember that one year Santa was sick, so Saruman filled in?

Turn-of-the-century Santa did not limit his offering of delight to children.

He apparently experimented for a while with being a gangster pimp.  Must have been something in the tobacco of the early 20th century.

But by the 40s, he was back in the spirit of giving, in the form of bullets.

Toys for the boys!  Seriously, WWII Santa was terrifying.

Fortunately, that horror is over, and we are back to good, clean fun from old St. Nick.

The children will be so excited!
Posted by Sarcastic Ninja at 09:57 10 comments:

All the Little Children


Christmas is creeping ever closer.  As is Hanukkah.  And possibly Kwanzaa.  Heck, the grocery store is stocking Valentine’s Day goods.  The point is, whatever tradition floats your boat, odds are this time of year is for celebration!

But you know who enjoys the season the most?  Children.  Primarily because they get lots of loot.  This week we look at the children of the Buderus family.

This was apparently on the cover of a book of German Christmas stories.  Such happy youth, frolicking with their new toys! 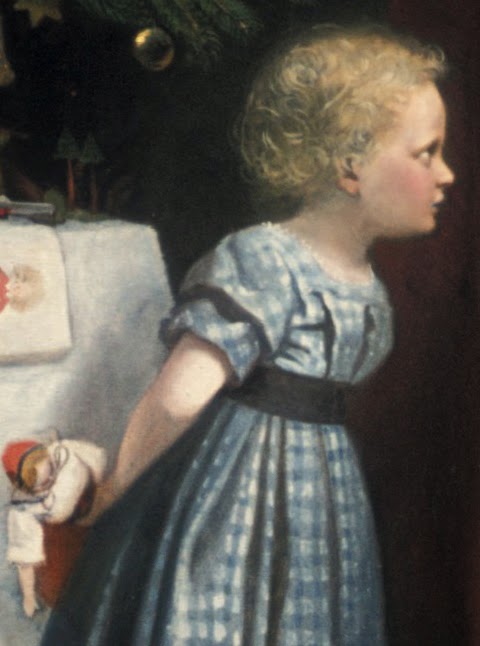 Well, I’m not sure if that’s joyous frolicking so much as trying to kill her sister with her eyes.  There is NO WAY Helga is getting her dirty hands all over Gudrun’s new doll. 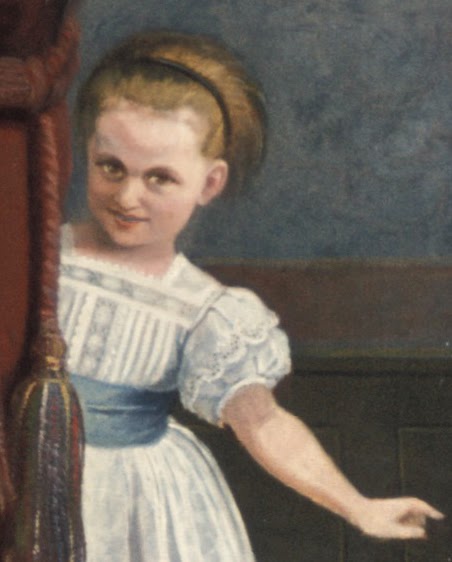 To be fair, Helga seems quite able to hold her own in a staring contest.  Her eyes are like a soul vacuum.  No one has looked directly into her gaze and remained sane. 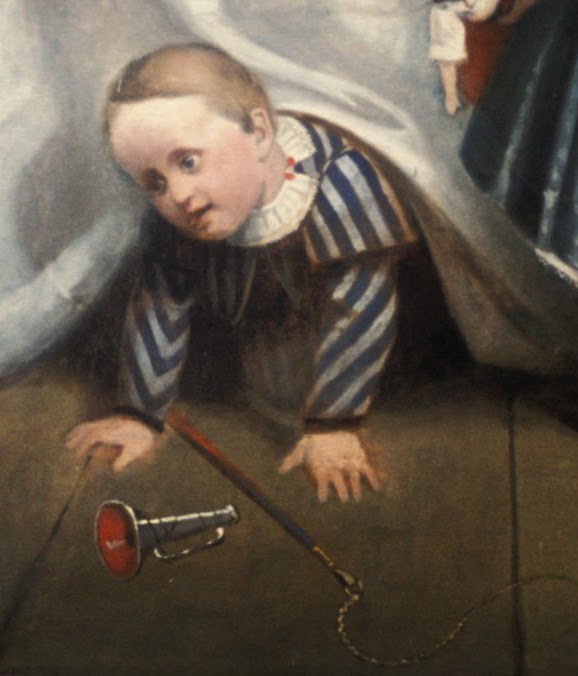 Once he was the brightest star in kindergarten.  Then he crossed his sister over the last sweetie.  Now he thinks he is a dachshund.

Side note: is that some kind of whip or crop lying around on the ground?  That might provide further explanation of the personality disorders which I am making up as I go along here.

Possible bondage equipment aside, these are the actual toys under the tree. 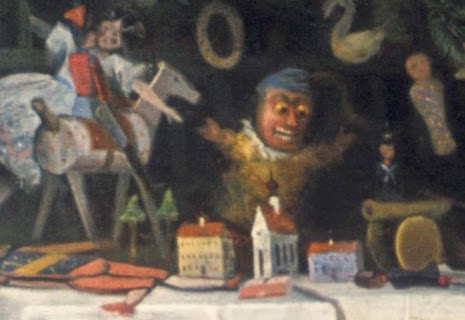 A faceless arm points from above, directing a giant clownish man with a face straight out of nightmares to go Godzilla on a peaceful toy village.  Wooden soldiers march to their doom before the puppet menace, bodies littering the ground.  While this is the kind of scene I would definitely set up under my own tree, I would not entirely expect it from two young girls and the host of an alien brain parasite.  But maybe this is a traditional scene from a typical happy German family.  Looking at Helga again, it's actually not very surprising at all.  Frohe Weihnachten!
Posted by Sarcastic Ninja at 07:25 10 comments:


Dear readers, with December upon us I thought I would turn to a nice, soothing winter scene.  Maybe some partridges, maybe some pear trees, perhaps some people frolicking in the snow.  I fired up Wikimedia and boldly typed in “paintings of winter.”

The first three subcategories it listed were “Paintings of allegories of winter,” “Winter landscape paintings,” and “Massacre of the Innocents by Pieter Bruegel the Elder.”

Guess which one I had to bring up?
At a glance, this is way tamer than some of the other stuff he painted.  As by far the most interesting result in the winter paintings category search, however, it deserves a look here. 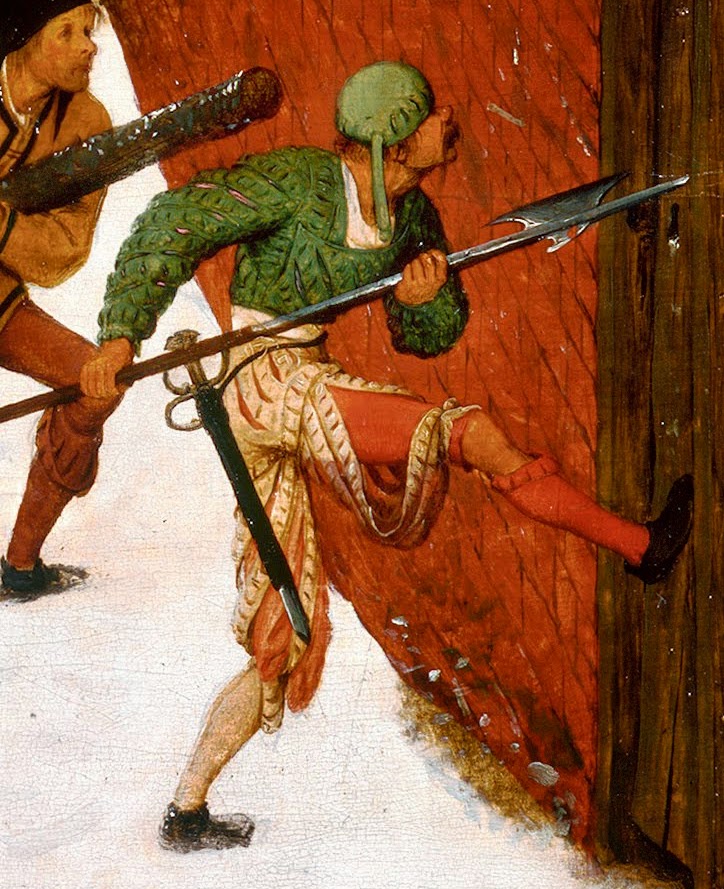 This cartoonish figure is ready to bust down some doors, which I assume he found by kicking every three feet down the line of the brick wall given that his hat is completely covering his eyes.  Fashion provided by Disney’s Pirates of the Caribbean costume department, specifically the designer who had a love affair with sliced watermelons. 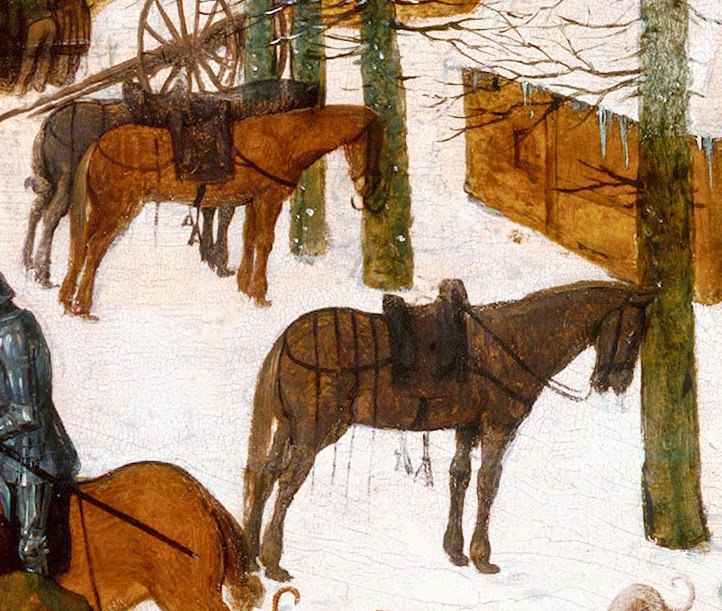 All of the horses look like they have been put in Time Out, with their heads sullenly against the trees.  I guess the only way to tie up a horse was to staple its ears to a tree trunk? 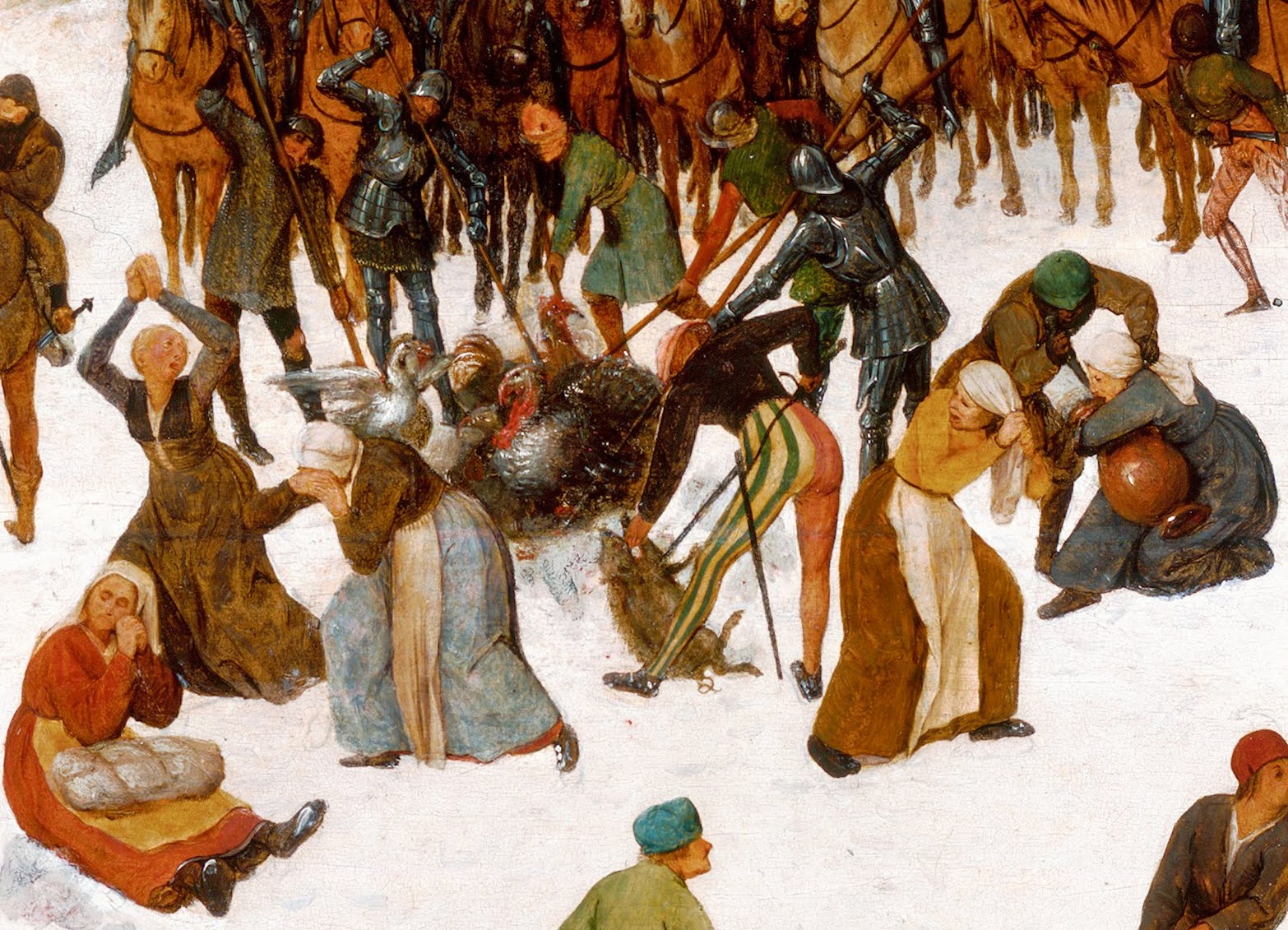 Here are some guys violently murdering turkeys with pikes.  So it’s like Thanksgiving, only much more pleasant for the turkeys.  The guy killing a pig (?) with his backside toward the viewer has the most awesome leggings ever.  Meanwhile women desperately struggle over jars and weep over nicely wrapped parcels. 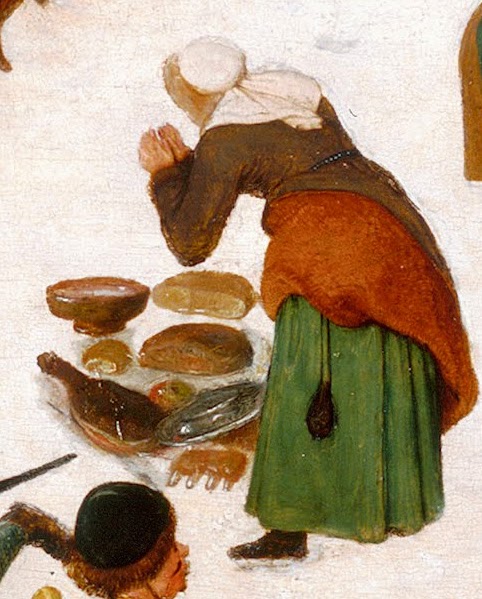 This lady seems to be praying over the contents of her larder. 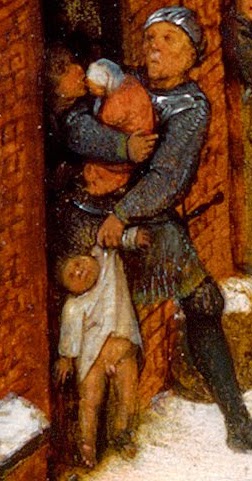 And this poor kid is having a bad day, being dragged from the house in the snow with a dislocated shoulder and no pants.

This is actually the most telling bit about the scene.  It turns out that this isn’t just a raid of a town for dry goods and livestock by men who have an impressive rap sheet with the fashion police.  The massacre of the innocents refers to the Bible story where Herod hears about baby Jesus’ birth, so he orders that all children should be murdered.

Flemish Pieter here decided to tell this story in a context his viewers could understand, so he depicted all of the murderers as Spaniards and Germans.  Because even in the 16th century, when you asked someone “Who would commit the worst atrocity you can imagine?” the first answer that sprang to mind was “Flamboyant Tights-Wearing Hitler.”

What this amounts to is that all of the turkeys and livestock and kitchen goods in the painting were originally dead babies.  At some point its owner decided that perhaps this was not the most appetizing scene to have hanging in the dining room, or bedroom, or anywhere, so he had all the tiny corpses painted over into a more palatable scene of pillaging.

So really, I take back what I said before about this being one of the artist’s tamer paintings.  People could handle his images of lobster monsters, or bird-lizards ripping their own stomachs open to spawn, but a modernized Gospel scene was considered too gruesome.
Posted by Sarcastic Ninja at 06:25 7 comments: