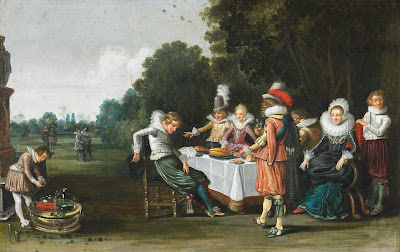 The Garden Party, by 17th century painter Esaias van de Velde, looks like your typical gathering of rich people out on a nice day, what with the light refreshments, table, servants, and amazing hats and shoes.  Sure, the men look like they might spend their evenings waiting in dark alleyways to stab you and take your wallet, but now, everything is sunshine and pleasant company. 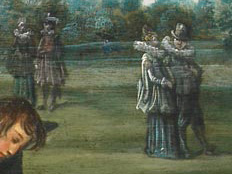 ...Except some of the company are ghosts.  Who are these spirits, absorbed in their own conversation?  Why are they here?  Were they killed in a carriage accident on the way to the party, and decided it would be a waste of a perfectly nice afternoon to cross over just yet?  The glass cases in the front of the picture appear to be empty; are they really full of ghost food?  Is the party really a séance gone awry, and they are hanging out for the show?  Are they just waiting for the Ghostbusters to be invented?  The world may never know.

Posted by Sarcastic Ninja at 08:50 No comments:

Hell is Other People (And Bagpipes)

Some of you may recall that the very first post in this blog presented the Garden of Earthly Delights by Hieronymus Bosch.  I now present for your viewing delight (if you are a bit demented) its companion painting, HELL.

You see, after all that nude frolicking about, making out with mermaids and getting high on giant raspberries, the karmic price must be paid.  And unlike the typical modern vision of hell with its boring old fire and brimstone, Bosch had a vision of the punishment realms to rival his view of what fun in the world was like.

We'll start with someone who is not being brutally mutilated. 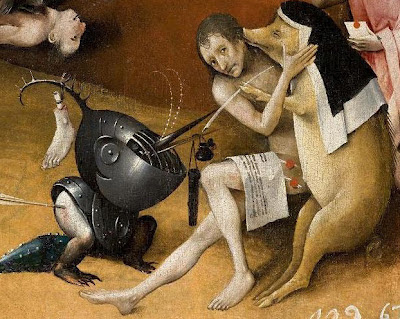 A nunpig is trying to get intimate with a rather uncomfortable-looking man, while a helmeted creature that appears to be part man, part bird, part frog, and part badger offers him a small pot.  Apparently the Manbirodger went through some difficultly to bring him this pot, as it has been shot in the leg and has a dismembered foot dangling from its helmet.  Maybe it contains a rare aphrodisiac to make the experience with the nunpig more pleasant. 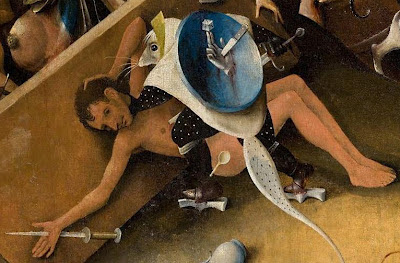 I assume this guy is being punished for gambling--besides the die on the impaled hand, there are other cards and games scattered around.  But what I want to know is....why does the mouse-creature strangling him have a spoon sticking out of its ankle? 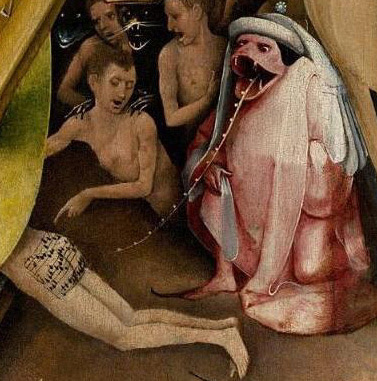 Hell's choir evidently ran out of paper, so they started printing music on inmates' naked bottoms.  The music stand is, of course, a giant Lute-Harp of Death that crushes in place the torso accompanying the bottom.  Also apparently in hell, demonic conductors use their massive beaded tongues instead of batons.  I like to think the dude gesturing at the music is trying to point out some kind of error in the notation. 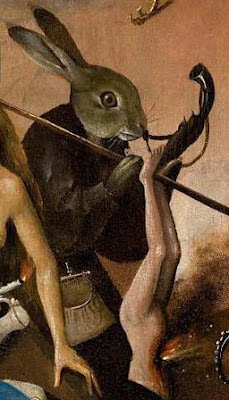 This is a rabbit. With a gun.  Despite the odd angle, it appears the body he is holding upside-down has an exploding stomach. 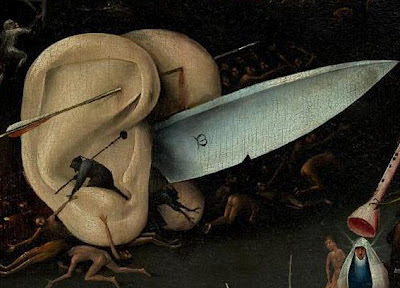 In hell, ears pierce YOU. 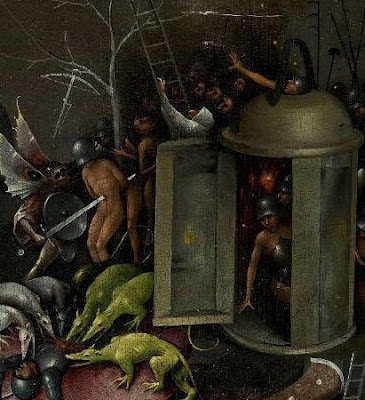 "Doctor...did you mess up the coordinates on the TARDIS again...?" 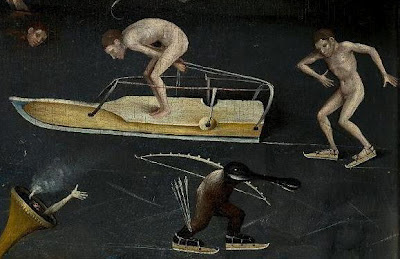 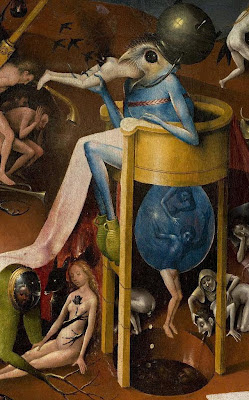 Ok.  So.  A giant bird with pots on its head and feet is devouring someone with crows flying out of his anus, while defecating fully grown people it presumably already consumed.  The expelled bodies fall into a pit (already full of bodies) while vomit and coins rain down on them.  I don't know what this is supposed to punish.  Did the eaten man bake four and twenty blackbirds into a pie?

Also there is a green creature with tree-branch legs and a porthole for a bottom, with someone inside watching a naked lady be violated by a man-donkey. 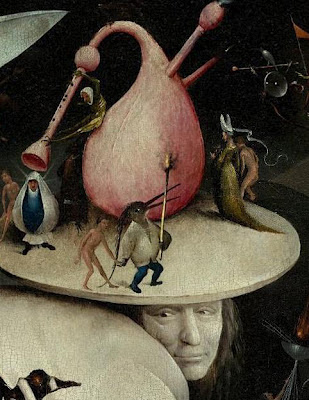 Now for the centerpiece.  The giant hollow man-tree with pink bagpipes on his head.  I guess the bagpipes WOULD be the instrument of choice in hell.  Really the man-tree looks quite placid in the middle of all this.  Maybe this is what the devil is really like, watching people stabbed and devoured and listening to a bad rendition of Scotland the Brave on endless loop, wearing a Mona Lisa smile.

He also has this adorable flag on his back.

Hell: Claimed in the name of the Pink Bagpipe Demon Tribe!
Posted by Sarcastic Ninja at 08:24 22 comments: 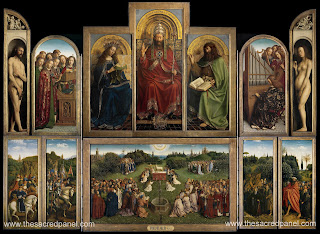 The Ghent Altarpiece, or the "Adoration of the Mystic Lamb," completed by Jan van Eyck in the early 15th century, is a fantastic work.  I highly recommend poking around at this wonderfully high resolution image of it, courtesy of The Secret of the Sacred Panel.  If nothing else, zooming in allows you to appreciate the plethora of amazing hats in the crowd scenes.  As usual, I'll just touch on a few details here.

Starting with the bottom half, we have this scene: 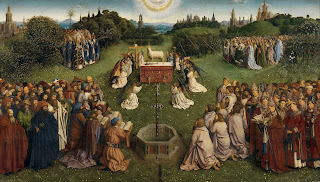 It's apparently the "adoration" part of the Adoration of the Mystic Lamb, and indeed there are throngs of people gathered around.  It's a pretty dramatic situation, with a remarkably calm lamb bleeding out into a cup, while angels dance around with anti-gravity censers, and a dove rains lasers over the ground.  You'd think all the people would either be distraught at the lamb's sacrifice, or joyful at the salvation taking place.  But really, most of them aren't even paying attention. 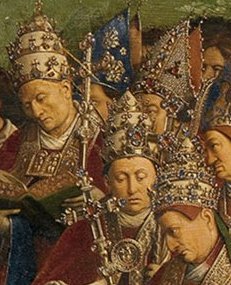 They generally look bored or annoyed, if they are even looking at the action at all. I particularly like this mopey Druid hanging out with the pagans, who is facing the wrong way.

In the other lower panels, the boredom and funny hats continue. 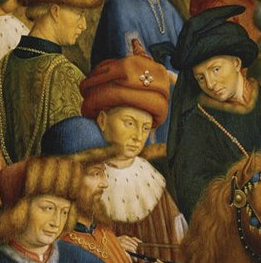 Then there is this ancient NBA star leading a crowd... 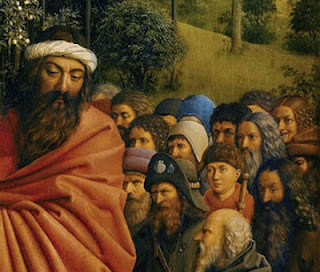 You may think it is just perspective making him look bigger, but if you look at the feet, he is 15 feet tall.  And he is leading an angry pirate...

...And this lady, tucked away in the back, who will stab you while you sleep.

Moving up to the top half, we have the choir of angels: 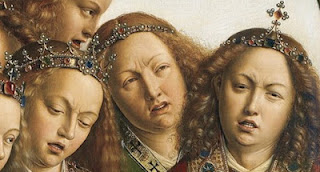 To be fair, this is what I would look like if I were expected to sing continuously for eternity, but I kind of thought that angels were supposed to be a bit more chipper about their roles.  Are these guys constipated?  Are they standing on one another's feet?  Was one of them caught talking angelic trash-talk about another?  Maybe they really wanted to be the angels in charge of smiting, instead.

And finally, there is John the Baptist:

There he is, sitting at God/Jesus' left hand.  His hand is raised, as if to poke God on the shoulder and say, "Hey...uh...I know that I was very ascetic in the world, and I greatly appreciate this fabulous jeweled cloak you've given me...but I don't supposed that now I'm in Your Kingdom I might get, like, a silk shirt?  Or maybe organic cotton?  Something other than coarse camel hair?  And maybe some shoes?"

Posted by Sarcastic Ninja at 08:43 No comments:

Georges de la Tour produced a lot of slightly unsettling paintings.  Like the musicians in a knife fight with what is clearly a zombie on the far left.  Or this gift-wrapped young man who is surrounded by women that look like they're short on mince for the pie and he will do nicely.  I think I just find his style of painting people a little off, like they're all a bit unhinged.  But this one particularly struck me as simple but nightmarish: 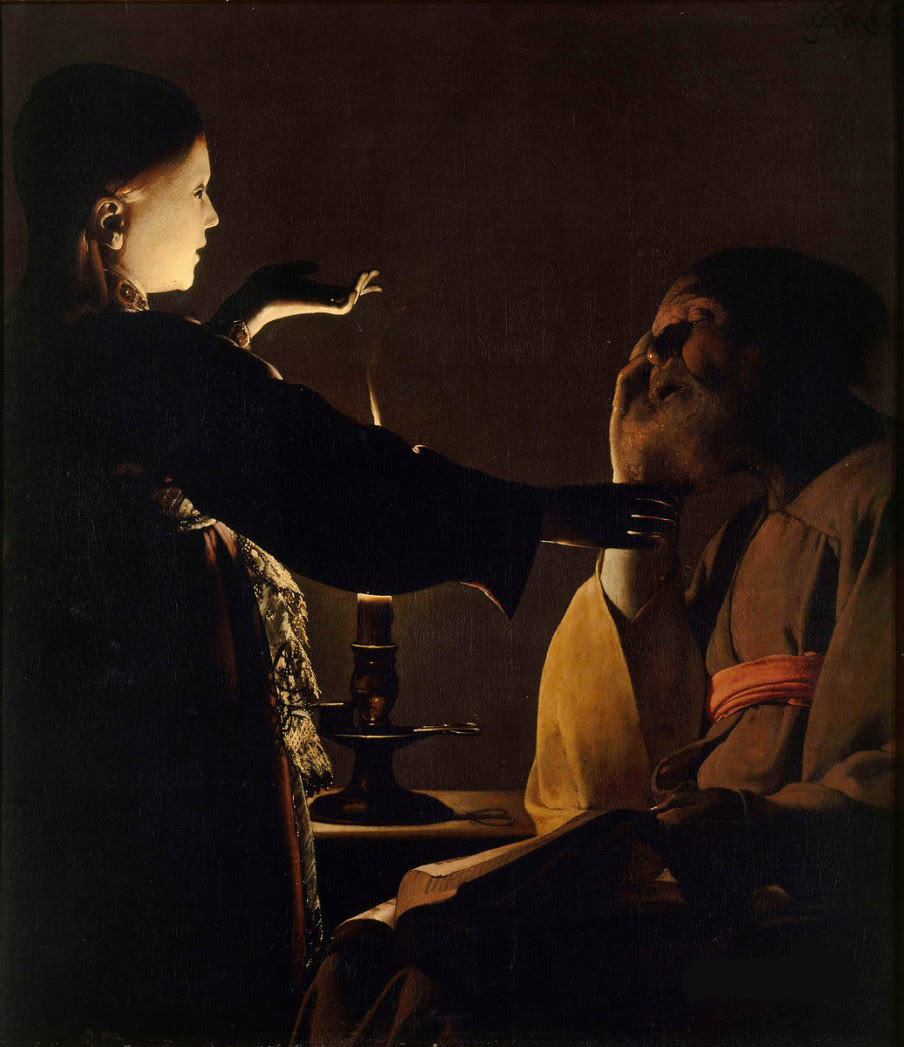 Ostensibly titled "The Angel Appears to St. Joseph in a Dream," that is clearly no angel. 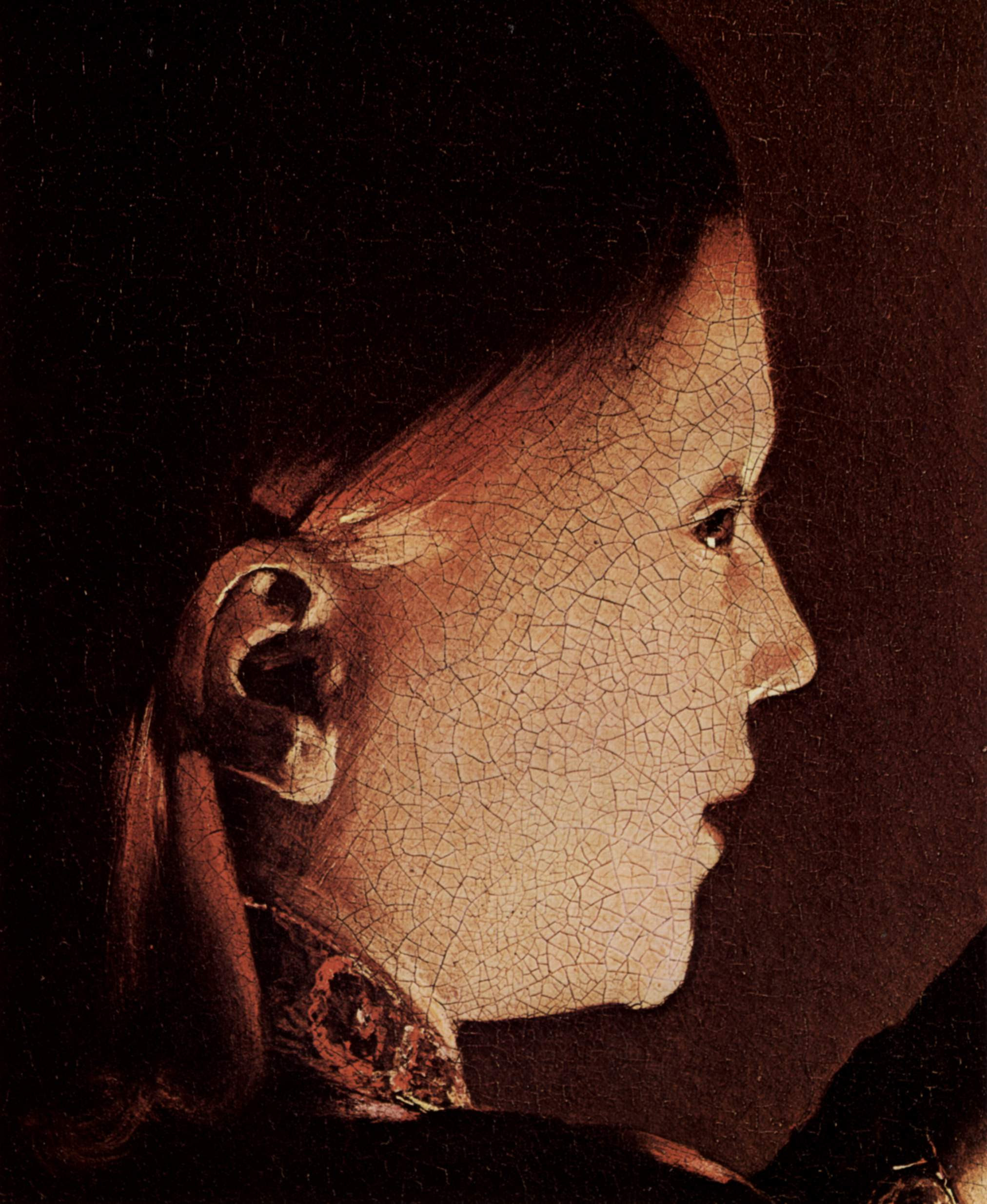 Look at the black soulless eye-pits.  That is a 17th-century Sadako from the Ring, crawled forth from his book to devour his soul and torment it for all eternity.  Her hand above the flame appears to be channeling a legion of invisible demonic minions to flow into their new flesh-host.  It would not surprise me if he had been a young man only moments before, his life force sucked out through his beard.
Posted by Sarcastic Ninja at 13:16 No comments: