Dear readers, it would appear that once more Easter is upon us, and with it the celebration of life and resurrection from death through chocolate eggs laid by a confused rabbit.  Or so I am led to believe by the supermarket shelves.

In honor of this occasion I have found a fantastic rendition of Jesus returning from the dead.  Apparently Jesus coming out of the tomb alive and having witnesses would not have been in keeping with his ultimate message of letting the world, including people who were not already his followers, know he just performed a great miracle; thus, most paintings of this scene feature two or three guards lying around the tomb asleep.  This version from the 15th century “Très Riches Heures du Duc de Berry,” however, takes this a step further. 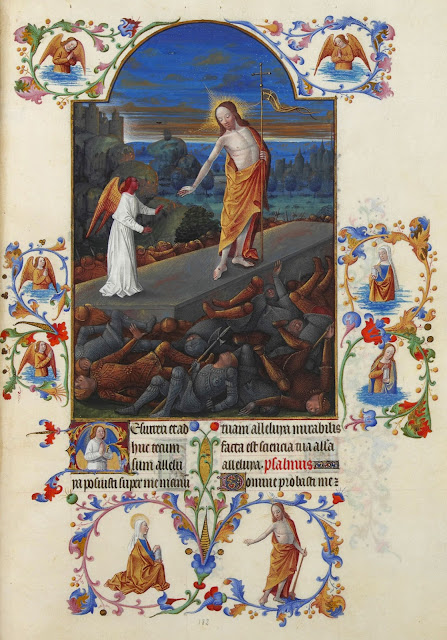 Look at him!  Jesus is literally surrounded by the fallen bodies of heavily armed soldiers.  They’re not just asleep; they are piles of flesh, limbs akimbo, necks at awkward, broken angles. 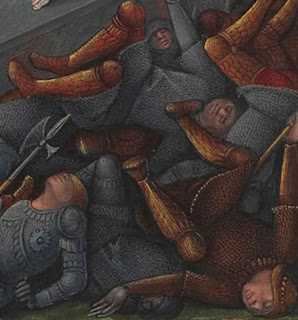 This Jesus was not taking his return from the dead lightly.  He was back to kick some serious butt.  And clearly he was up to the challenge of an army or two on his own, as his only companion is this guy. 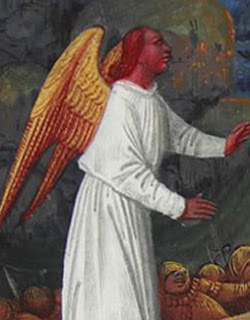 A rather diminutive angel who clearly just spent waaaay too long at the tanning salon on his way to the resurrection.  There’s no way he caused that much havoc when he’s just recovering from sunstroke.

Not content with merely taking out the world’s military forces, the resurrection was also apparently the catalyst for the next great flood, as well.

Everyone, human and angel alike, is waist-deep in water.  And when the angels are finding water levels to be getting a little uncomfortable, you know the world is in deep (ha!) trouble.

Really what this painting made me think of was this clip for Gandhi II.  You know, the spirit of Easter.  Happy Spring, everyone!
Posted by Sarcastic Ninja at 12:37 17 comments:

Dear readers, I have been ridiculously busy this past week, and it looks like things are only going to get busier for a while.  I apologize if entries are a bit shorter or further between.  I’ll try to find pictures that are worth a thousand words to make up for it.  Starting with this one.


After last week’s naked woman-fest, here is something for the ladies.  I originally found this piece on Ugly Renaissance Babies, but as it does not feature babies, and instead has so much more, I decided it deserved its own entry. 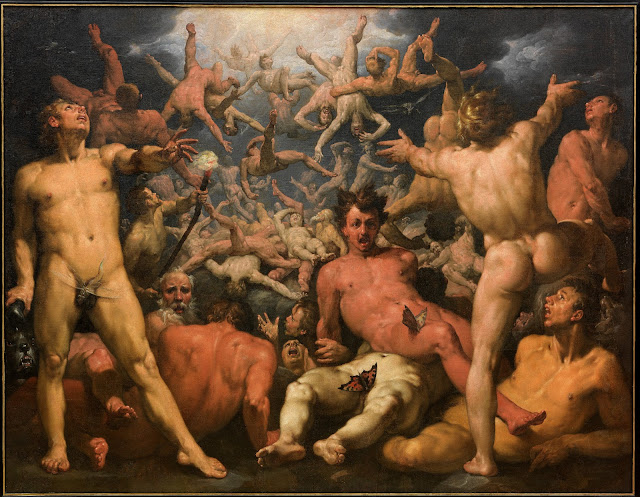 The Fall of the Titans, by Cornelius van Haarlem, demonstrates once again how much this artist likes some prominent naked man-butt front and center.  Well, slightly to the right.


I try to find images with high resolutions, the better to see all the little details that make many paintings great.  With this one, Wikimedia has a copy available at 7,328 × 5,688 pixel resolution.  You can just about see the pores on these guys’ faces (or other bits, if you prefer).  This allows one to appreciate the delicate eyelashes and bushy ‘stache on this guy… 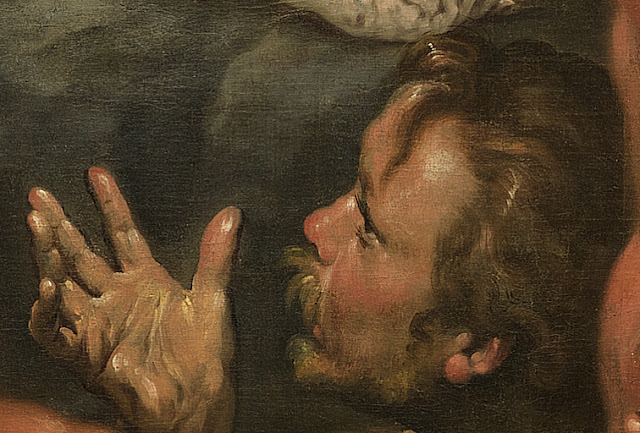 But it also meant that in scanning through I looked at this strategically placed dragonfly close up (sensitive readers should avert their eyes). 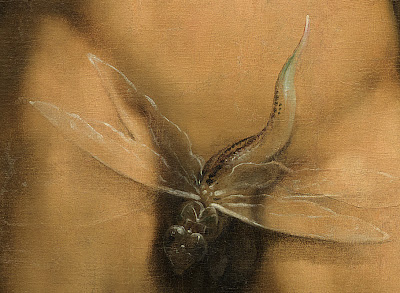 That’s not a dragonfly; that is a giant transparent leech with wings and a face.  It could eat a cat.

There is also this dog hanging around, probably thinking it has died and gone to Fresh Meat heaven. 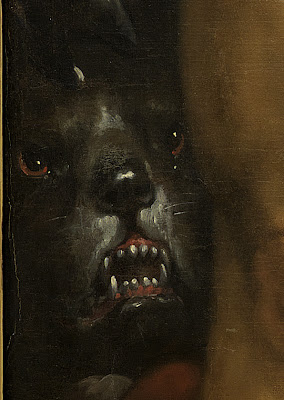 This painting features a lot of impressive aerial acrobatics.  Here is just one example to demonstrate the kind of questions they raise. 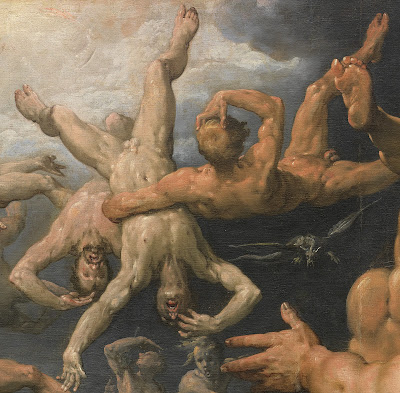 Why is the one guy grabbing the other one?  Does he think it will break his fall?  Also why is he awkwardly grabbing his own head?  Is it just to show off his massive biceps mid-fall?  Is that a dragon back there?

Finally, I think this guy is my favorite.  His expression pretty much sums up my reaction to this painting. 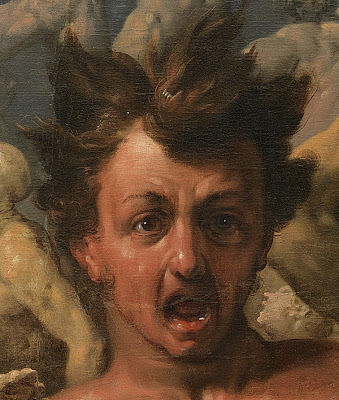 I wonder if this is what the Weather Girls had in mind?
Posted by Sarcastic Ninja at 13:00 23 comments:

What This Painting Needs Is More Naked Ladies

Dear readers, recently an anonymous reader suggested I look into the works of Paul Delvaux.  Delvaux is a 20th century painter, and thus much more modern than the usual fare here, but it’s important to follow up on anonymous tips in the rough world of art reviewing.  So, I dove into Wikipaintings to see what I could find.

Early on we get some pretty standard nudes.

Your basic naked lady on a couch.

There are other images where having all the women naked wouldn’t be how I would have envisioned it, but it’s fair enough in the situation.

Ok, so a bunch of courtesans.  Normally they would be out and about clothed, but maybe this is their annual nude beach party.  It looks like the courtesan health care package even includes free breast exams by another naked lady, reducing the self-consciousness of the patient alone being topless.

Then there are some where it seems like the law would have been involved.

So…uh…we can still give him the benefit of the doubt…maybe this is a nudist household, and they are all naked all the time so there is nothing odd here.  And the lady is gesturing to her breasts invitingly because she’s one of those mothers that breastfeeds her children until they’re 18.  Totally natural and not creepy…

But then he starts taking normal scenes and just adding naked women to them for no apparent reason.

“Oh, hi George.  Sorry, can’t chat, must dash to catch the bus down there.”

This trend gets more obvious than this.

Everyone is wandering around, waiting for their trains and chatting.  And a couple of women forgot their clothes.  Also there’s a creepy girl in a mirror who I assume is the Belgian version of the girl in “The Ring.”  Typical day at the train station!

No one in the Congress observes the line of nubile young women lined up in the chamber.  They’re just debating away, probably thinking, “Man, it’s warm in here.  I knew we shouldn’t have approved the plan to lower heating costs by insulating the walls with women!

In conclusion, Delvaux’s style seems not unlike the thought process of the typical teenage boy: everything is better with naked ladies.
Posted by Sarcastic Ninja at 01:11 17 comments:

Dear readers, this week my totally awesome friend over at The Calamity Cat directed me to the Ugly Renaissance Babies tumblr.  And once again an afternoon was lost in the awesomeness that is bizarre and hilarious art.  What follows here is a small random sampling from the site; I highly recommend checking it and its snappy commentary out.

A dolphin?  Really?  It looks like a cross between a whale and a giant sea leech.  And Arion is wearing the latest in Stoned Baby Cape fashion while he jams on his…lute?  Mandolin?  Do you use a bow to play the mandolin?  How well could a dazed superhero baby play an instrument while balanced on a mutant bloodsucking dolphin, anyway?

In a totally not creepy scene, a woman breastfeeds a baby and an old man at the same time while standing on a pile of decapitated baby heads.  More heads fly through the air as young and old are “nurtured.”

Along this theme, this is definitely not how I had envisioned Ariel and her six sisters growing up.

I always thought it was storks that brought children.  This explains why they scream so much.

The world’s first cartoon villains.  I hope that they are emptying someone’s piggy bank after stealing candy from a baby.  Also I see where Cruella de Vil got her penchant for long cigarette holders.

Is…is she forging a baby?  Is that how it worked in the Renaissance period?  Or maybe they actually had a robot infant army.  In the corner there is a lifeless pile of forged robot baby shells, presumably waiting for replacement limbs and Sonic Shriek vocal implants.

In conclusion, I feel that modern baby photography has lost some of the charm of baby-painting back in the day.  Look at what we are missing!
Posted by Sarcastic Ninja at 13:57 22 comments: