After last week’s disappointingly normal entries, this week we are back with more from the mythological naked lady lover, François Boucher.  It’s a double feature again, because these two works form a thematic set of being totally blasé about abduction and sexual assault.


The paintings represent the story of the abduction and rape of the woman Europa (sometimes used as a personification of Europe).  The story goes like this: in a totally out of character move, Zeus has the hots for Europa, so he disguises himself as an animal to get close to her and have sweet, sweet bestial sex.  Remember the swan?  This time it’s a white bull.  Which I guess is at least slightly more anatomically plausible in terms of human-animal proportions, if you want to consider the logistics, which I really don’t.


So, he transforms into a bull and hides out in her father’s herd.  Europa and friends are hanging out and gathering flowers, because that was the only acceptable lady-activity in ancient times besides being lusted after.  In the midst of the flower-gathering, she spots the bull and starts caressing it, apparently not questioning the fact that she’s never seen this particular bull before.  Maybe Zeus had some background info on her personal preferences and the bull wasn’t such a longshot choice of animal, after all.  Anyway, eventually she sits on the Mystery Bull’s back, and at this point Zeus the Bull seizes the opportunity to zoom off into the sea and swim to Crete with her.  Presumably it’s this point that he rapes her, although Wikipedia tactfully only mentions that he made her queen of Crete.


The first painting is “The Abduction of Europa.” 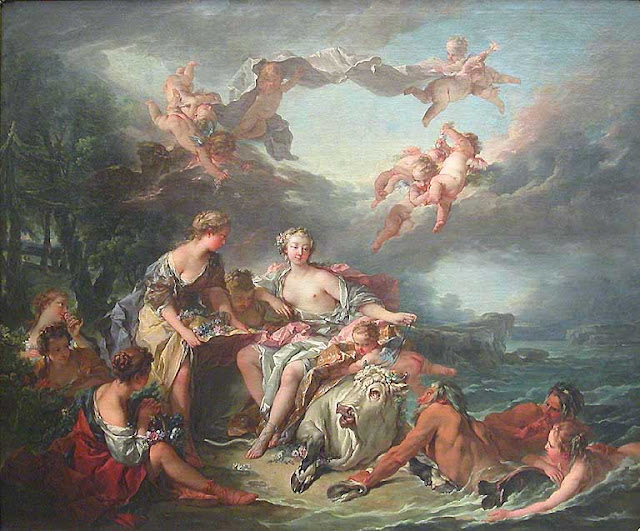 This is the most laid-back abduction ever.  First off, the “abducted” lady is surrounded by people, none of whom seem to bat an eye at the random bull their friend has plonked down on like some kind of smelly La-Z-Boy. 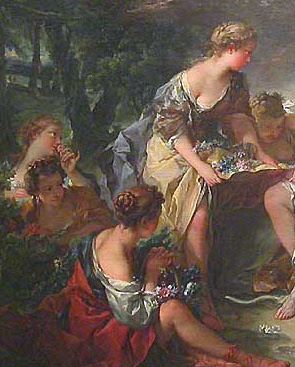 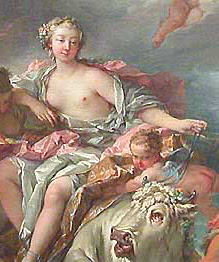 Europa herself doesn’t seem terribly concerned by the situation.  She’s not even paying much attention to the naked baby angel she has on a leash, who frankly looks way more threatening than the bull.  She’s just sort of staring blankly into space, enjoying her very comfy, loose-fitting garb. 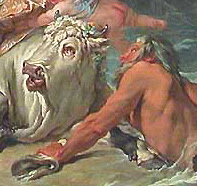 Even the bull isn’t in a rush to get up.  The random naked man coming out of the sea (who no one seems to notice) is more concerned with the situation, whispering, “Uh, hey, Zeus, you might want to get a move on with the whole abduction thing before Hera notices what you’re doing.  Again.”

The dude behind him in the water is the most concerned of anyone, wondering to himself, “Is this really a smart abduction plan?  Having a bovine swim to an island, with nothing to hold the woman in place?  Should we at least knock her out?  No?  Ok then.”


Now we get to the second painting, “The Rape of Europa.” 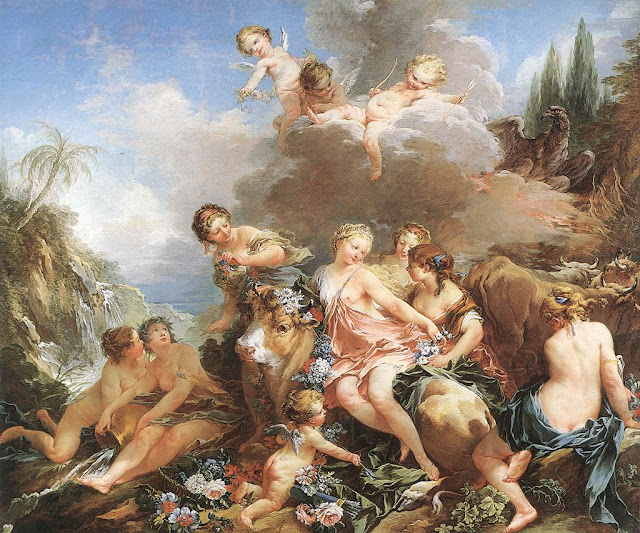 This is also the most laid-back rape ever, as Europa still doesn’t seem to have noticed that anything is amiss.  Maybe she goes long-distance swimming with bulls as a part of her regular health routine.  Frankly this looks suspiciously like the scene we just saw, with lots of ladies and flowers hanging out, except here there are less clothes and the accompanying cupids look more like they are melting. 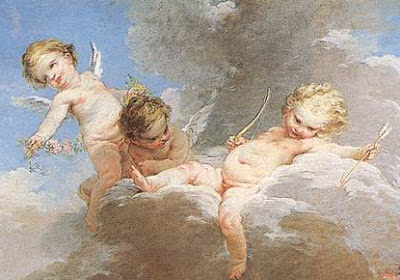 I must confess that I have been putting off writing the latest installment of the Marie de’ Medici story.  The next couple of paintings just have not inspired me that much.  However, there are still more spectacular multi-story displays of hubris to come, so we will go through these two quickly to get to the gods and power-grabbing.  If you are new here or interested in catching up, there are links to the ongoing Medici Cycle series above.


First up: "The Birth of the Dauphin at Fontainebleau." 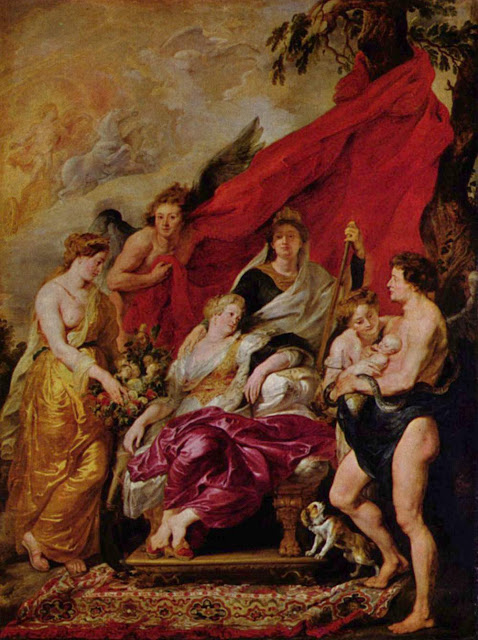 Here we see Marie just after giving birth to Louis XIII.  First we might note that the woman who just popped out a baby is wearing way more clothes than most of the people in the birthing chamber.  Evidently childbirth is much easier and neater when done on a throne. 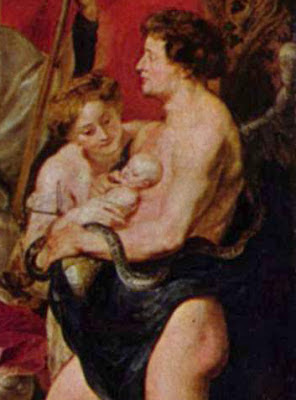 She has handed over her precious newborn to the person you most want to have holding a child: a mostly naked man wrapped with a snake.  Well, it’s either a snake, or the baby has one freakish umbilical cord.


Then we flash forward several years, to “The Consignment of the Regency.” 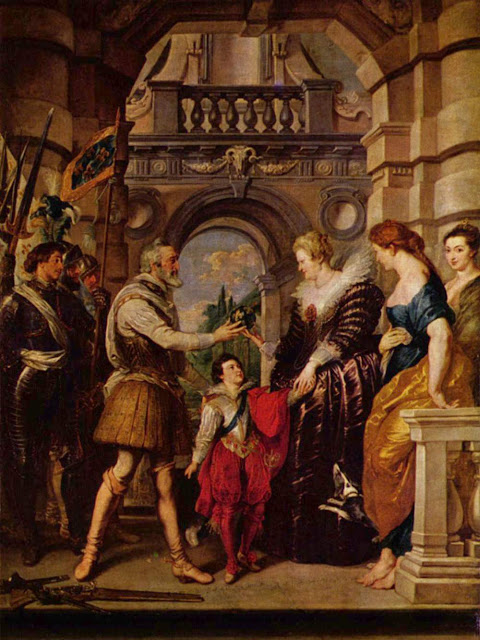 Here dear Henry hands over charge of his empire to Marie.  Unfortunately she realizes that it is just a ball and not an actual empire, so he has to go off to war to get her one.


This is pretty low-key for this series.  Apparently it was originally envisioned as a much more awesome painting with snakes and (probably) naked ladies, but it was all toned down to paint (ha ha) Marie in a positive light, which was a bit tricky due to circumstances that arise a bit later…


TO BE CONTINUED.
WITH MORE NUDITY AND SNAKES.
Posted by Sarcastic Ninja at 09:51 15 comments:

Today I came across the website “Discarding Images,” dedicated to medieval book paintings.  And then my afternoon was lost.

It all started with this. 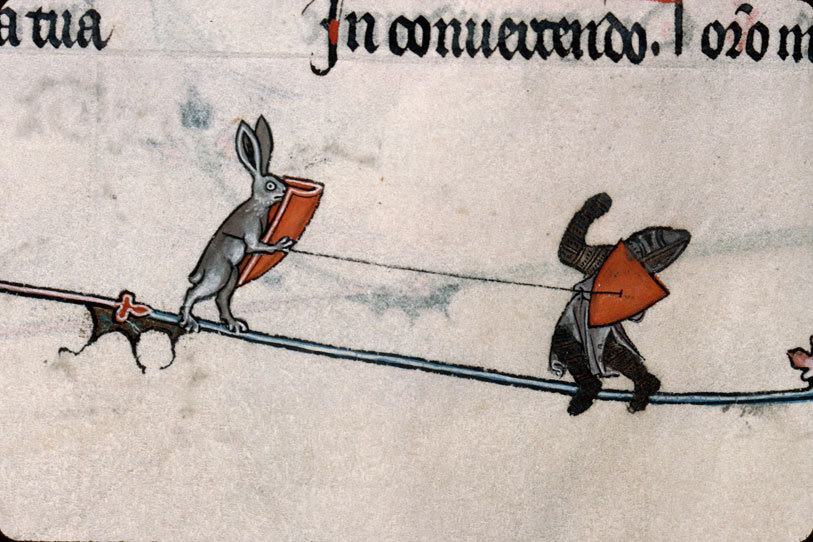 I can only assume this is a rabbit hyped up on drugs attempting to steal a kite from a knight who is distracted with doing the Invisible Limbo.

Besides kites, medieval rabbits had a variety of hobbies.  Here is one playing bagpipes made out of other animals, serenading a man/saytr with a bear head coming out of his butt. 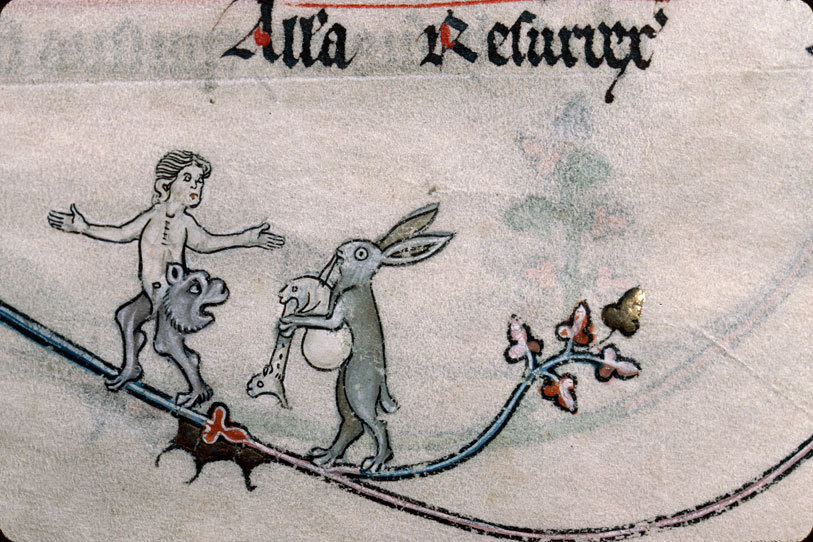 Sometimes rabbits got into disputes, which would be settled via the time-honored dispute-settlement system of jousting.  This one, riding an old man that has developed snail armor, takes issue with a dog that has forced an unwilling rabbit to be his steed. 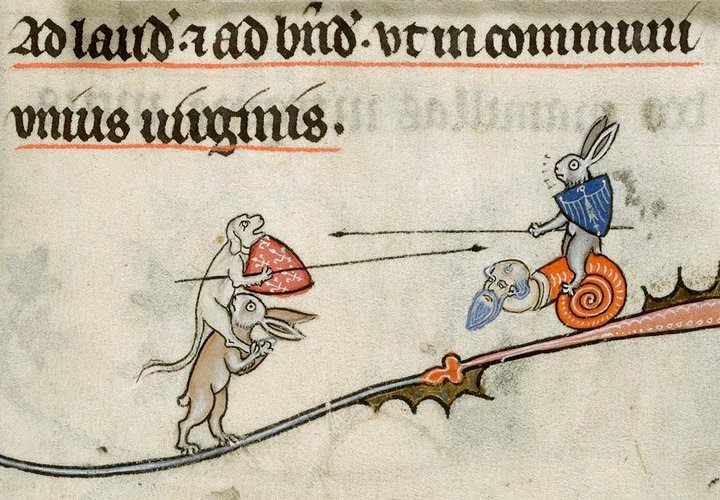 Other rabbits have less mercy. 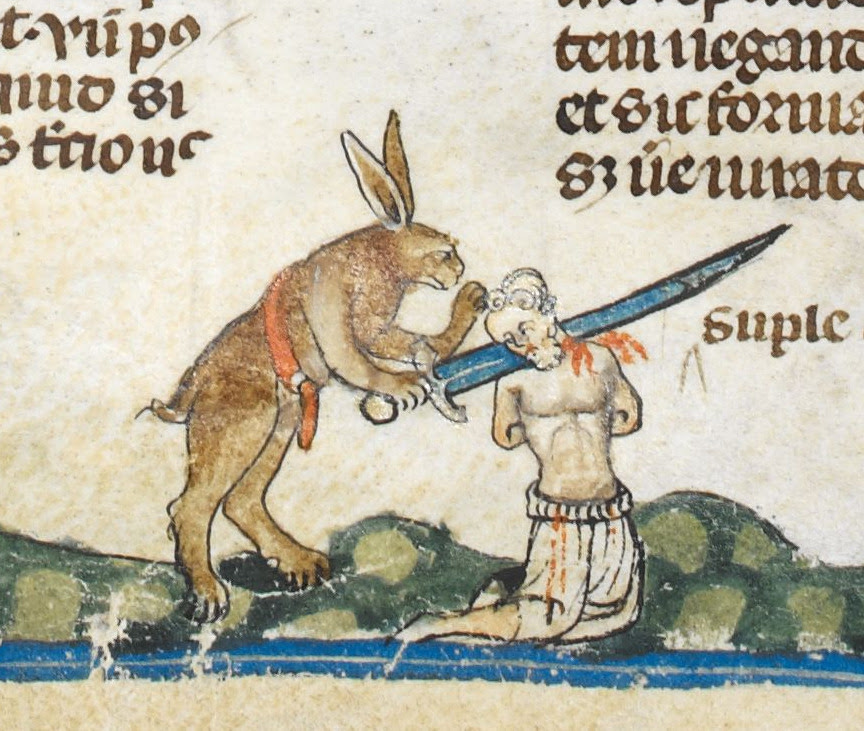 But let’s face it; rabbits aren’t the only ones who get into violent fights.  Humans are known for going for the throat in a blind rage.  And sometimes getting the throat isn’t quite sufficient to take out your enemy. 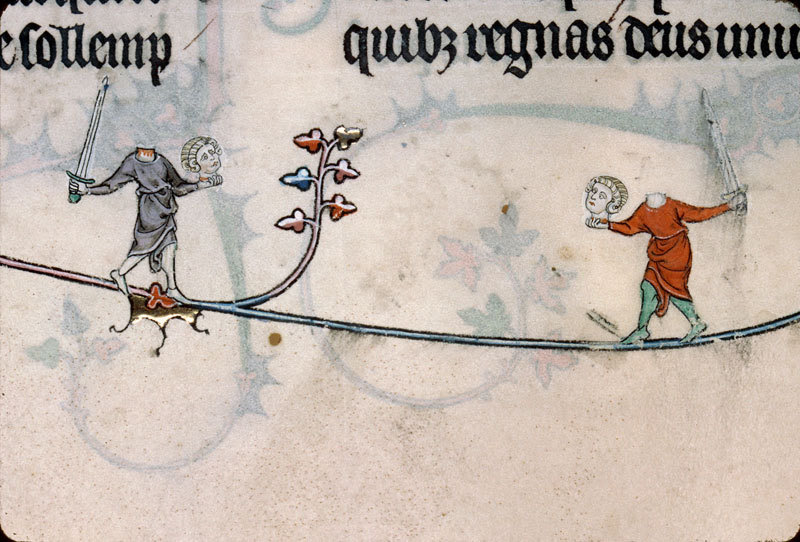 After all, it’s only a flesh wound. 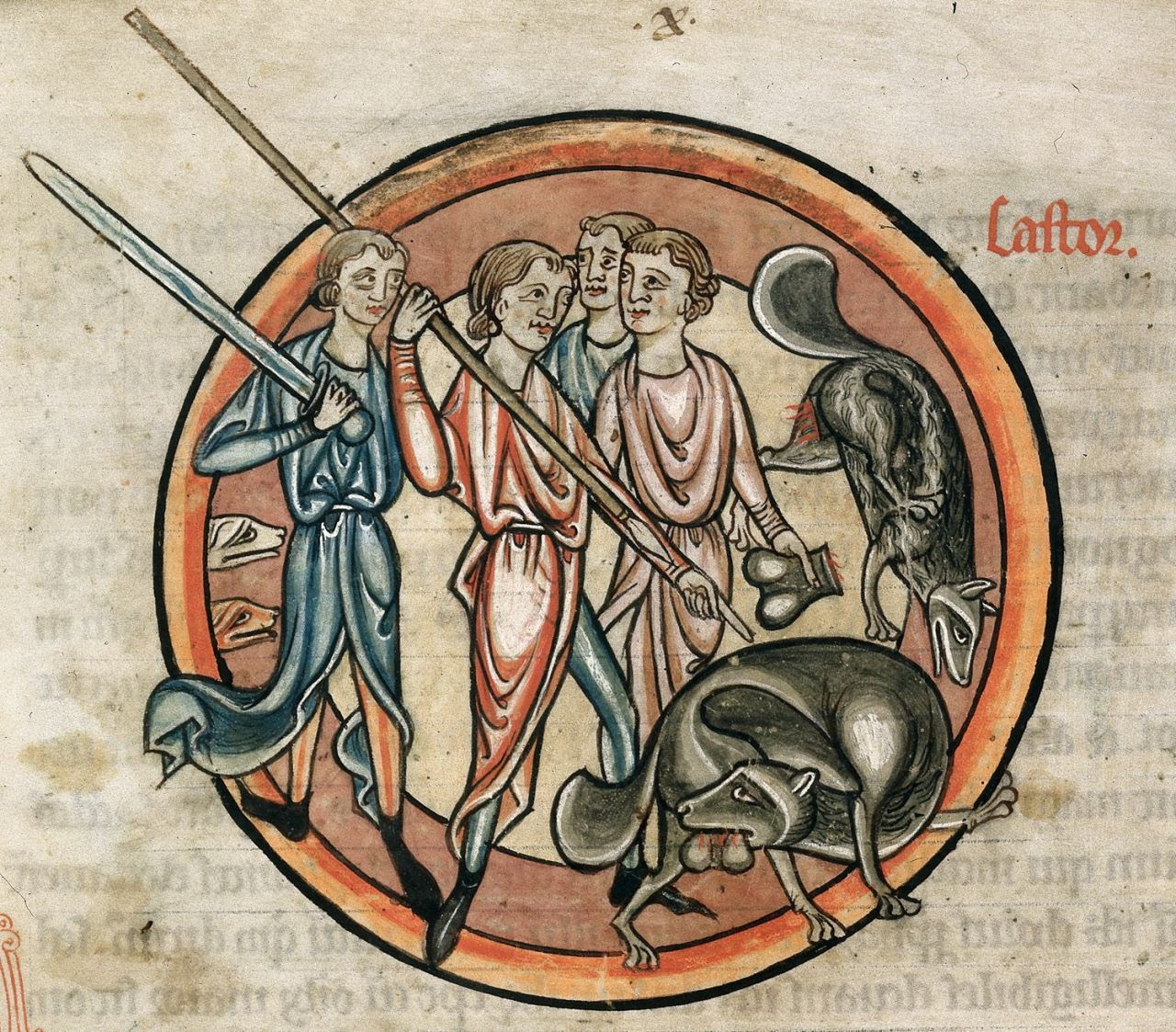 Speaking of dismemberment, apparently this depicts beavers gnawing off their own testicles and throwing them at hunters so they will not be killed.  The men look awfully smug at their haul of beaver testicles, and the “beavers” look like raccoons about to pass out from pain and blood loss.
Now things start to get weird. 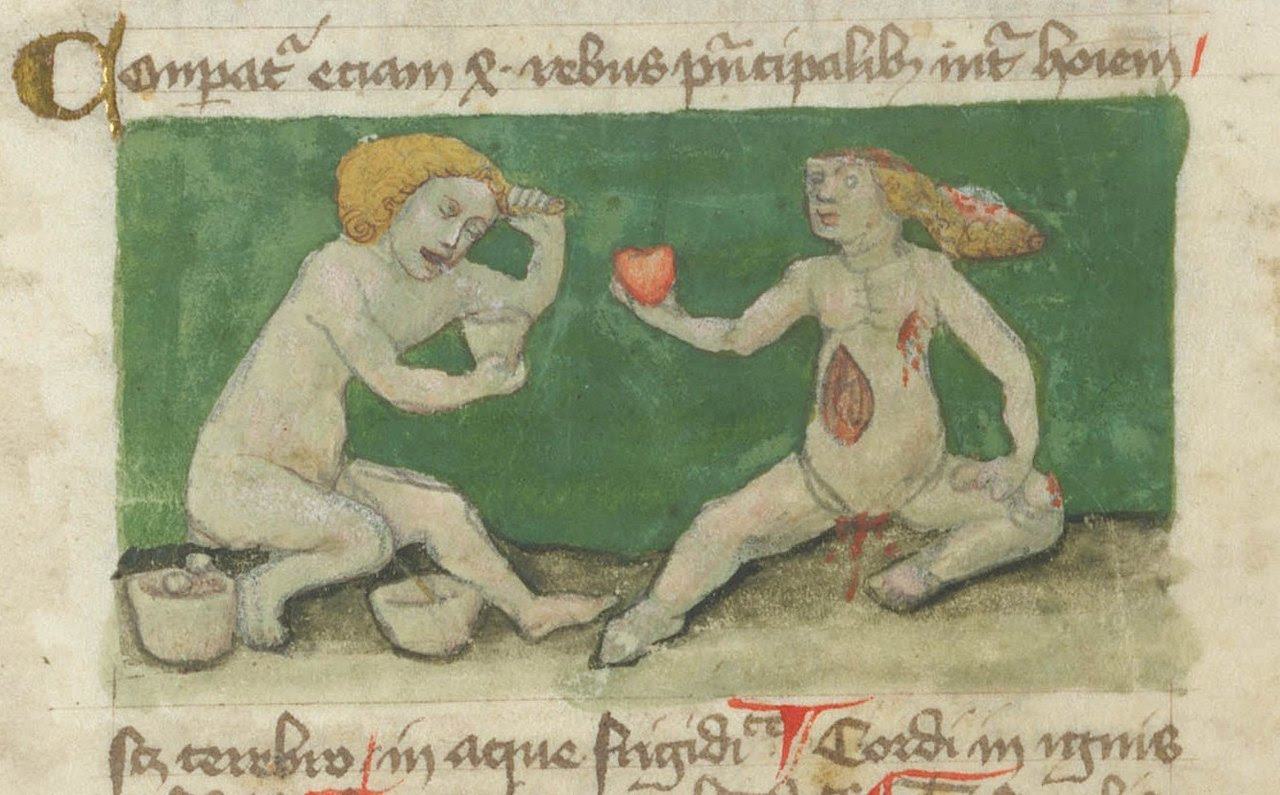 A man vomits into a cup and pees into a bowl while tearing at his hair.  At his side, Frankenstein’s bride seems to be in mid-construction, with heart not yet in place and the skull flip-top still unhinged.  I’m assuming it is female just because of some strategic blood flows, but the chest looks like it was sewn together using whatever pieces were left lying around.  Maybe the left figure’s bodily fluids are necessary to complete construction of the other one?  Either that or this is seriously the worst frat party ever.

On the topic of the formation of human beings, here is an interesting take on Eve’s construction from Adam’s rib. 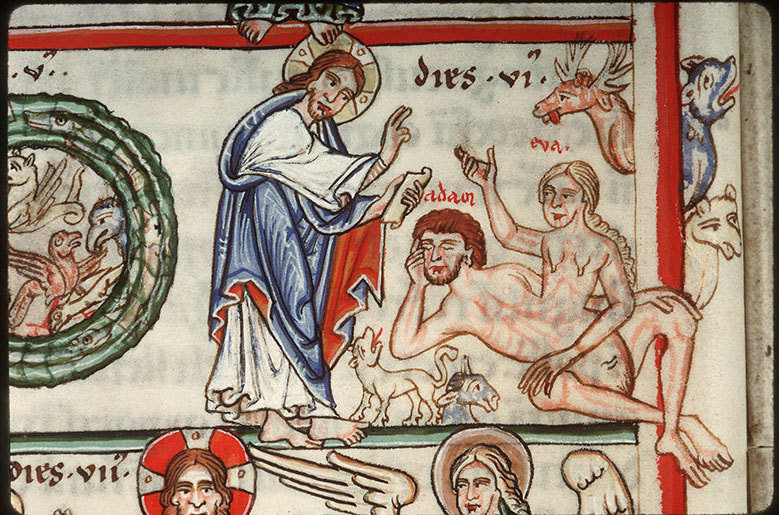 Eve is already orating before she even has a lower torso.  And Adam is already falling asleep as she talks.  This sets a precedent for all future male-female interactions.  Also apparently there were a lot of animal tongues stuck out at the formation of woman.  The animal kingdom was not too impressed with the development.

Some animals came to enjoy what human females had to offer, though. 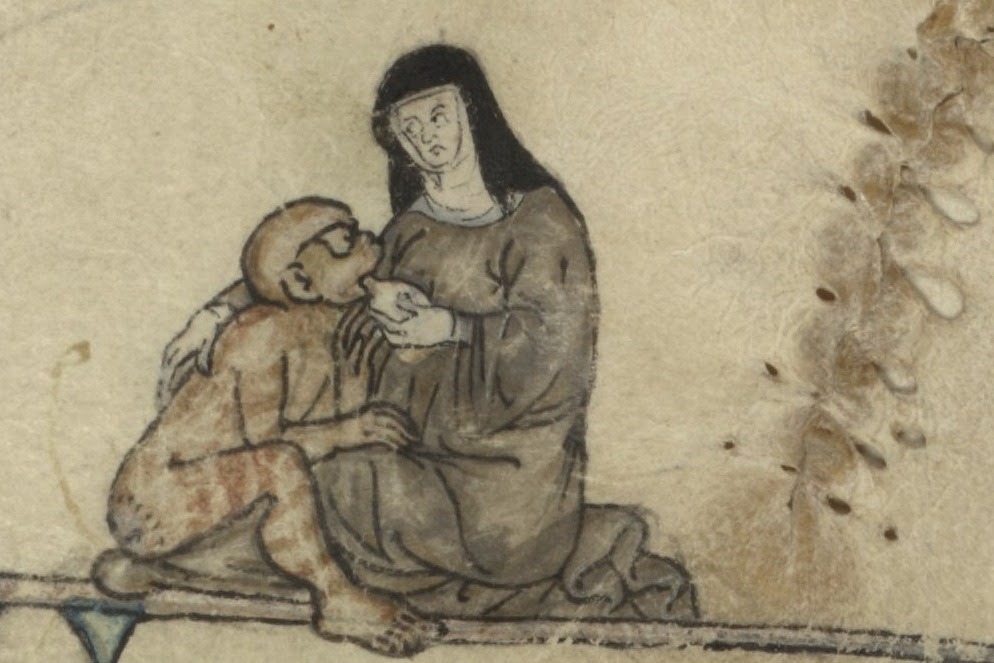 The description says the nun is breastfeeding the monkey, which leads me to wonder how she has the breast-milk available in the first place.  Maybe medieval nuns just had some kinky taste.

Finally, we end with the medieval version of goatse.  I recommend averting your eyes now. 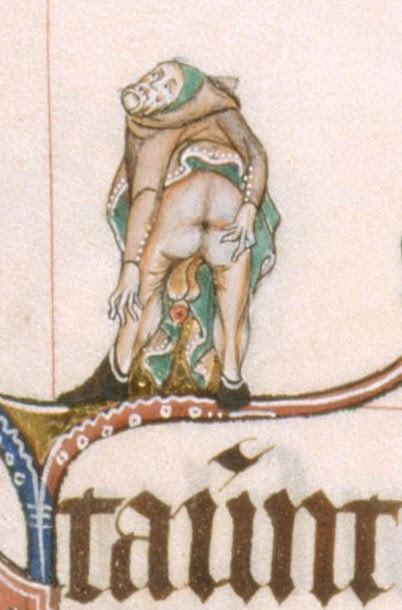 There are an awful lot of pooping pictures in marginalia.  I selected this one because it appears in a Psalter.  Apparently some scribes were not impressed by the Psalms.  Either that, or they were just crappy artists. *badum-ching*
Posted by Sarcastic Ninja at 10:28 21 comments:

Dear readers, I have just returned from a journey involving 13 time zones, so my brain is currently about as on top of things as a particularly cobweb-filled crawl space.  Thus, this week’s belated entry will again be rather short so I can get back to the important tasks of catching up on other people’s awesome blogs and passing out in the middle of the day.

We return to the work of François Boucher, who we have encountered here and here.  This portrait of Louis Philippe of Orléans has both 100% less nudity and 100% more baby transvestitism than those previous paintings. 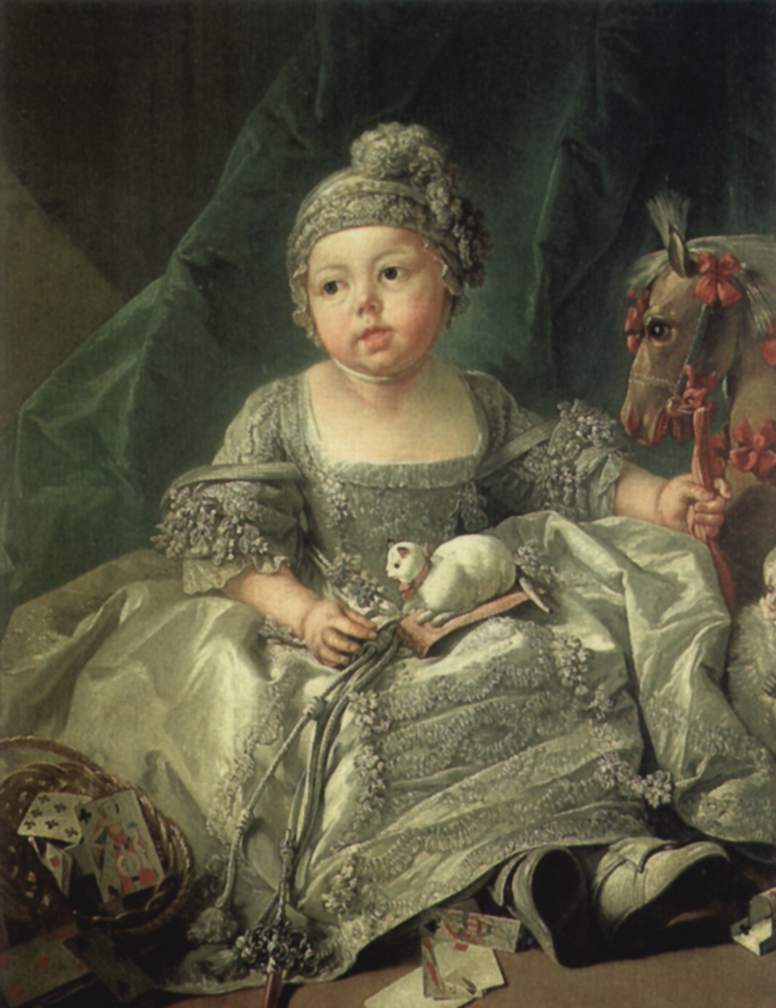 Young Louis is sporting a lovely gown and pair of Mary Janes, guaranteed to make him the envy of the ladies of the court.  Also he must have had an aunt that was a little crazy on the hat-embellishment crocheting.  Either that or the hat is there to cover some serious birth defects.

On his lap he has what I initially thought was a terrifying midget cat on a sled.  I have since read that it is a cat toy, which is much less funny.  So just pretend you didn’t read that.

One might point to the gown-wearing as an early example of responsible parenting not forcing pre-conceived notions of gender on the child.  However, besides the toy cat and horse, his other main plaything appears to be cards.  Clearly he is already a gambling addict at the tender age of two.  Look at the bags under his eyes; he must have had a long night at the card parlor before sitting for his portrait.  The gown may simply be the result of some early wining and womanizing, grabbing the wrong garment in the morning as he toddled out of the cradle.
Posted by Sarcastic Ninja at 06:54 12 comments: